Conducting a class is a lot like conducting a jazz symphony for Glenn McNair, associate professor of history.

"Every class is a new performance," he said. "I have to be enthusiastic. I have to know the music well. I have to know my musicians. The things I want to accomplish, that's kind of my score. Everybody is sort of riffing out that theme, but I have to keep it together so that at the end we've created some beautiful music together."

McNair has heard the applause. He won the 2008 Trustee Teaching Excellence award for faculty members in their first 10 years at Kenyon. His courses cover aspects of African American history, including the Civil War and the civil rights movement.

He started at Kenyon in 2001, building on a foundation of experience that ranged from law enforcement to talk radio to finance. He was a police officer in Savannah, Georgia, and also worked as an agent for the U.S. Bureau of Alcohol, Tobacco and Firearms, assigned to Macon, Georgia. He investigated skinhead gangs, crack and methamphetamine dealers, and mail bomber Walter Leroy Moody.

He was loaned to the Secret Service during the 1992 campaign season, assigned to candidates including Bill Clinton. "I got to see America. I got to hang around with the candidates," McNair said. "It honed my interest in politics."

As he pursued advanced degrees, he became fascinated by American history, and he focused on how the legal system came to terms with slavery in the 19th century. "I hold you accountable, but at the same time I own you. That's the central issue throughout slavery: how do I treat you as a thing and as a human being? I learned so much about human nature by studying slave owners."

Grappling with issues of slavery and race can be a challenge for students. "You have to create an intimacy in the classroom, especially when you're dealing with the topic of race as I do. The students have to be invested. They have to care about each other and about what goes on here." 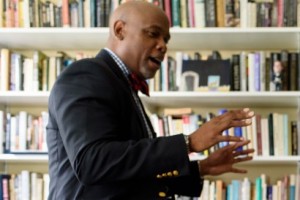 Professor of History Glenn McNair fights against the myth of the Civil War’s “lost cause.” Inspired by her internship and Kenyon experience, Jasmine Wilson '19 imagines a future in education. 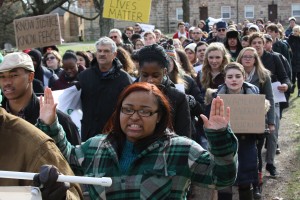 Members of the Kenyon community weigh in on recent events in New York, Cleveland and Ferguson, Mo.