Kenyon people are book people. So what better way to usher out 2014 at kenyon.edu than by calling attention to some of the notable Kenyon books that appeared during the year? Dan Laskin, who edits the book section for the Alumni Bulletin, chose a dozen books—by Kenyon alumni as well as faculty members—that especially intrigued him in 2014.

Andrew’s Brain, by E.L. Doctorow ’52 (Random House). The narrator of Doctorow’s latest novel is a cognitive scientist—a self-described “freakishly depressive . . . klutz”—who speaks of himself in the third person as he talks to his psychotherapist, recounting a tragic, convoluted life (and love) story that intersects the 9/11 attacks.

Say What You Will, Cammie McGovern ’85 (HarperCollins). Amy is an intellectually gifted high-school senior with cerebral palsy. Matthew, who struggles with a disability of his own, reluctantly volunteers to be one of her “peer helpers.” A friendship, then a romance, take surprising turns.

Original Bodies, by Doug Ramspeck ’76 (Southern Indiana Review Press). The poems in this collection, Ramspeck’s fifth, use elemental images—of mud and loam, snakes and sky, grass, snow, the moon, crows—to cast a somber, lingering spell. Together, the poems read like an extended meditation on nature, mortality, and possibilities for connection.

Dreamers of the Absolute: A Book of Hours, by Anna Sun (Sylph Editions). Sun, a Kenyon sociology professor, has written a novella-length meditation centered on a young woman who spends seven days at a Trappist monastery. Kenyon Review editor David Lynn calls the beautifully produced book “austere and yet scorching in its passions.”

The Hidden Mechanics of Exercise: Molecules that Move Us, by Christopher M. Gillen (Harvard University Press). Gillen, a Kenyon professor of biology, explores the biochemical intricacies at work in exercise and athletic performance—with clear explanations, deft analogies, and a sense of wonder. Gillen masterfully explains the science while capturing its “deep intrinsic splendor.”

Waking Up White: And Finding Myself in the Story of Race, by Debby Irving ’83. Irving has written an engrossing “racial autobiography”—unsparing in its self-examination—that weaves her personal story into the history of white privilege in the United States. Waking Up White is an eloquent, provocative call to action.

The Great Northeast Brewery Tour: Tap into the Best Craft Breweries in New England and the Mid-Atlantic, by Ben Keene ’00 (Voyageur Press). Keene’s engaging tour includes not only the beers and breweries but also stories of the people behind them. Excellent photos enrich the flavor.

Marketing the Moon: The Selling of the Apollo Lunar Program, by David Meerman Scott ’83 and Richard Jurek (MIT Press). The authors compellingly chronicle NASA’s sophisticated efforts to promote the space program to the American public. Superb illustrations, including historic photos and period advertisements, help bring the Apollo era to life. 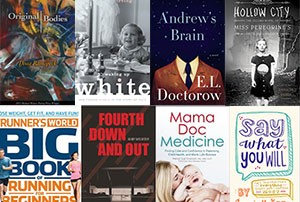