Editor's Note:  Becca Roth returns to campus Saturday, February 22, at 7:00 p.m. for a screening of One: A Story of Love and Equality in the Community Foundation Theater in Gund Gallery . A discussion discussion moderated by Thomas S. Turgeon Professor of Drama Jonathan Tazewell and Ben Kress '14 will follow. Check the Kenyon Calendar of Events for more information.

All we need is love. The problem, as Becca Roth ’10 sees it, is that we spend a lot of time trying to define what love is—and what it is not—and in so doing, we can end up generating hate. Roth thinks the solution might well be open discussion.

She tested these views in making One: The Story of Love and Equality, a documentary film about the 2012 vote in North Carolina on an amendment to limit marriage to one man and one woman. Roth’s goal was to make a fair, non-politicized film aimed at fostering greater understanding between opposing sides. Part of her desire was personal. Her own experience as a gay woman growing up in New York left her baffled by the people who oppose gay marriage in North Carolina and elsewhere.

“I don’t think people are intentionally hateful,” said the twenty-six-year-old, who lives in Brooklyn. “If people acknowledge where others are coming from—even if it’s hurtful and inaccurate—and get to know them, then opinions will change.”

In One, which is set up as a countdown to the vote, interspersing interviews with campaign events and rallies, she presents real people who would be affected by the legislation. The film features an optimistic young gay couple planning what they hope will be a legal wedding, as well as poignant scenes of an elderly lesbian couple navigating the legal side of health care—visitation, power of attorney—as they age.

But when it came to getting gay-marriage opponents to talk on camera, Roth ran into resistance. Throughout the film, the one man/one woman amendment was ahead in the polls. Yet its supporters, she said, “were so closed off and unwilling to talk.”
She understood the desire for each side to stand together. When we share arguments with like-minded people, we feel validated. Likewise, when we dismiss opposing viewpoints as “stupid,” their views become irrelevant to us.

“But it doesn’t bring people together,” she said.

Ultimately, she found only three people who would speak on film about why they believed homosexuality was wrong: an ex-gay counselor at a local church and a couple at an anti-gay-marriage rally. To get them to talk, she felt she had to conceal the fact that she is gay. The counselor explained how he believed same-sex attraction was like a disease that could be treated, while the couple said they believed homosexuality is a sin. They said that they didn’t know any gay people.

Roth chose not to end the film with the final vote—the amendment passed by more than 20 percentage points—but instead with the reactions of the gay-marriage opponents when she came out to them, revealing her sexual orientation. The response to Roth was kind, with perhaps a glimmer of bewilderment—she wasn’t a faceless stereotype, but a person they had come to
care about.

“The people who voted for the amendment thought they were voting for the right thing,” Roth said. “For me, it was realizing everything they were doing was out of love and not hate, which so many people think.”

Still, one of the amendment supporters told her she needed to read the Bible. “They’re never going to get it completely,” Roth said.
But the dialogue for her was a start.

This desire for communication and understanding comes out of her years at Kenyon, Roth said. “At Kenyon, the people I surrounded myself with were very progressive. That was powerful and great.”

As a student, she helped organize a gay prom in Mount Vernon. It wasn’t particularly well attended by the high school students for whom it was intended, but it brought out vehement protesters. Roth ended up in a shouting match with the protesters and left wondering what she’d actually accomplished. It was a defining moment for her and for her work.

“The world isn’t Kenyon,” she said. “I got this expanded need for love and understanding in the world.”

Since graduation, she has worked as a writer, director, and producer of films such as the indie short Rain in Summer, and on music videos, including “Somebody Saves” by Kind Monitor. She’s currently writing a feature-length film that she describes as being “in the outline stage.”

Roth is happy that the Supreme Court struck down the federal Defense of Marriage Act last year, opening the way to challenges of gay-marriage bans like the one in North Carolina. But making gay marriage legal isn’t her only goal.

“Even if gay marriage is legal tomorrow, there’s still going to be half the country that doesn’t understand,” she said. “It needs to be presented to people in a way that’s welcoming and not alienating.”

Love, she said, can’t be reduced to a shouting match. “You can’t fight fire with fire. You can’t hate people into loving.” 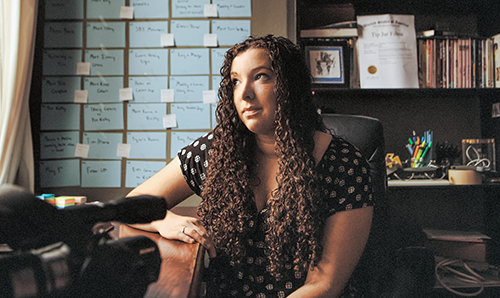