After a whirlwind week of Orientation — including a rush to move into residence hall rooms, the traditional Opening Convocation, the ritual welcome of First-Year Sing, the first day of classes, and a farm-to-fork community feast along Middle Path — the 488 students of Kenyon’s Class of 2023, plus 10 transfer students, have become fully immersed in life on the Hill.

The majority of new students arrived in Gambier on Saturday, Aug. 24, although many arrived earlier for pre-Orientation programs focusing on scientific research, writing and thinking or outdoor exploration. International students and participants in Kenyon’s KEEP and STEM Scholar programs also arrived early to get acquainted with Gambier.

New students and their families were formally received during Convocation, held Sunday morning, Aug. 25, at the Kenyon Athletic Center. “Welcome to the Hill, this special place in central Ohio that will soon feel like home,” said President Sean Decatur. Student Council President Delaney Barker ’20 also delivered greetings on behalf of the student body: “Soon you will understand exactly how magical this place is,” she assured the new arrivals.

Dean of Admissions and Financial Aid Diane Anci then introduced the new class to assembled faculty and staff. Hailing from 38 states and 25 countries, the first-year class represented over 400 individual high schools. Nearly 20% identify as students of color, and 11% are international. Nearly half of the class enrolled at Kenyon through a round of early decision admissions. “There is no question that a Kenyon education demands your attention,” Anci said. “And there is no question that it returns it in unexpected proportions.”

Three days of additional Orientation activities included academic preparations such as meetings with faculty advisors, language placement exams and the all-important registration for classes, as well as “Life on the Hill” sessions designed to acquaint new students with campus expectations and policies, and social events including a late-night ice cream party. Orientation culminated in the First-Year Sing, when all new students were invited to sing Kenyon’s four traditional songs on the steps of Rosse Hall, under the direction of Professor of Music Benjamin Locke.

The brief concert, which was livestreamed to an audience of parents and alumni watching on Facebook, began with some light and good-natured jeering, but culminated, as is tradition, with the entire community joining together to sing “Kokosing Farewell,” marking the new class’s symbolic acceptance into Kenyon. Although a sudden late-summer storm drenched last year’s Sing, this year saw the return of the pleasant weather that traditionally accompanies the event.

Following the first two days of classes, the Class of 2023’s first week at Kenyon culminated with a community-wide feast on Middle Path. Tables dressed with fresh sunflowers stretched from the College gates at Wiggin Street all the way to Ransom Hall, as Appalachian music by the band JMJ Crescent provided accompaniment for a meal featuring local meat, vegetables and baked goods. Seated on hay bales alongside faculty, staff and community members, students were able to enjoy dinner before taking part in games of croquet and cornhole on the lawn of Cromwell House, the traditional home of Kenyon’s president.

Concurrent to the feast, the Gund Gallery also hosted an opening reception for their fall exhibitions featuring Kenyon alumnae, including “Hue, Saturation, Value: The Archer Paintings,” by Meg Cranston ’82, and “For Girls Becoming Women; everyday encounters,” by Mia Halton ’73.

Highlights From the New Academic Year 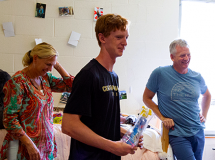 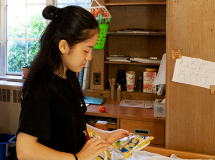 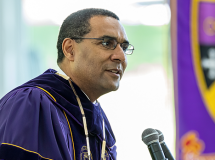 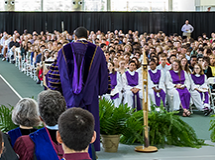 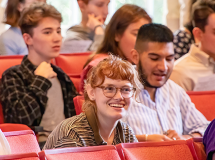 Students rehearse before the First-Year Sing (photo by Mike Reilly) 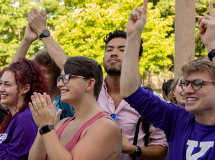 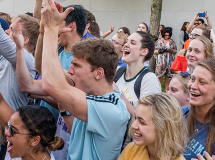 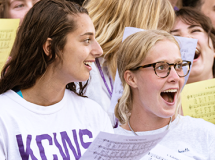 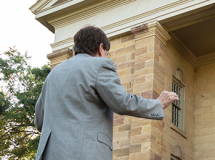 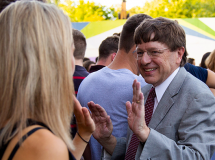 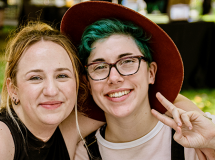