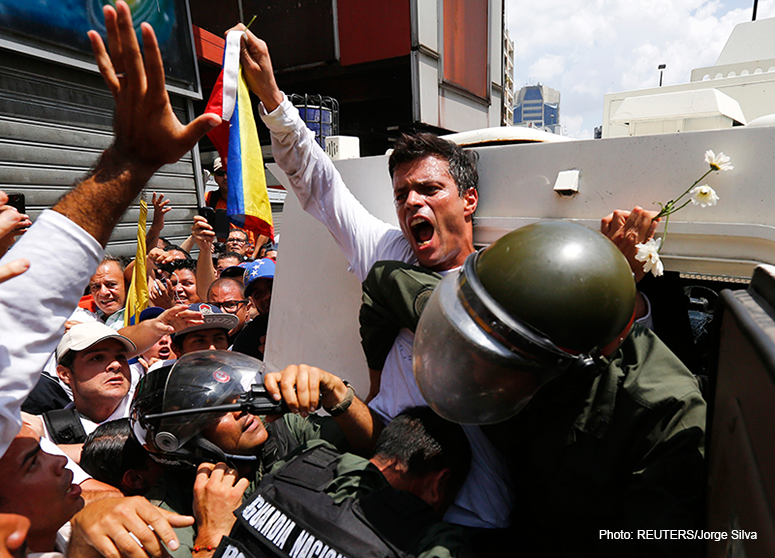 Leopoldo López ’93 is a leading opposition figure against Venezuelan president, Nicolás Maduro, successor to former president Hugo Chávez, who died 11 months ago. This week, López was arrested after three deaths following an anti-government rally in Caracas. Maduro supporters accuse López of inciting unrest, while human rights groups such as Amnesty International say his arrest is an attempt by the government to silence its political opponents.

Provost Joe Klesner, who had López in class when he was a student at Kenyon and also specializes in Latin American politics and international affairs, unravels the situation.

Q: As a Venezuelan opposition leader, what does Leopoldo López oppose? What does he stand for?

A: Venezuela is sharply divided between the supporters of Chavez and his successor, Maduro, and the opposition, including López. This split mirrors socioeconomic divisions in Venezuelan society.  Supporters of López tend to be more middle class in origin, while the Chavez and Maduro supporters tend to be poorer.

Chávez was a classic populist. He came to power promising to better the lives of poorer people. He characterized himself as a kind of Robin Hood. Chávez -- and Maduro even more so -- haven’t had much commitment to democratic process. They have been inclined to use their control of the state to distribute economic resources to their followers and to stack the cards against their opponents at election time. The López side regards them as elected dictators.

López would return Venezuela to a time when there were competitive elections and people could freely speak without being bullied by the state. He’s committed to a democratic practice in which who is in power is determined by who wins the most votes.

The other point to remember is that oil is Venezuela’s main source of revenue, and that is true of the Venezuelan state’s revenue bases, too. Venezuelan politics for 50 years has been about who controls oil revenues. The stakes are relatively high: If you control the state, you can spend the oil revenue. Chávez and Máduro said they would use the revenues to benefit poor Venezuelans. López and his supporters don’t think Chávez or Maduro have actually used the revenues to improve the lives of the people.

Q: How is López's arrest a game-changer in this situation?

A: I suspect López is trying to position himself within the opposition to be the leader. He’s one of a handful of opposition politicians who have taken lead roles, but he hasn’t been a presidential candidate before.

He’s trying to provoke a kind of standoff that is so public that there is much less likelihood that he will be abused while a prisoner. I think that is a risk. Máduro and his people are pretty ruthless. He could end up in a bad situation for taking this brave stand.

Q: What advantages does López have in this protest? What are his biggest challenges?

A: It is a profoundly and relatively evenly divided society.  Over the years, López’s side has public support from about 45 percent of the population, but that leaves the other 55 percent who have been mobilized to support Chávez forces. They have voted pretty regularly for that side, although there are grave questions about the fairness of the electoral process in Venezuela at this time. I don’t want this to come across as not being supportive of Leo, because I think he’s a very brave man. His efforts to try to bring democracy to society and have a fair and level playing field are important. But there are plenty of Venezuelans who wouldn’t be supportive of his message.

A: The Venezuelan government under Chávez and now Maduro has been our biggest adversary in Latin America in the past 15 years. Yet, they continue to sell us oil. We’re their biggest customer, by a wide margin, and Venezuela is one of our biggest sources of oil. But we’ve had very bad relationship with Venezuela since Chávez was in power. If López’s side came to power it would be more satisfying for the U.S.

Q: How can students apply what they learn at Kenyon to put this event in perspective?

A: A couple of themes probably resonate with students who are studying politics and society in Latin America. On the government side, there’s the continued practice of populism. Populist messages are quite popular and successful in Latin America. How can one oppose a populist like Chávez?  Another big theme would be a continued challenge of establishing a set of democratic procedures that everyone in the society can agree to that are in fact democratic. Most countries have democratic-sounding constitutions. But are the elections really fair? Can you really express opposition? In other words, are democratic institutions being subverted by politicians who don’t respect their opponents?  Anyone who has a commitment to democracy needs to think through the way in which politics are practiced on the ground.

Read a story about Leopold López from the 2007 Alumni Bulletin.