Best-selling young adult author John Green ’00 addressed 415 members of the Class of 2016 at Kenyon’s 188th Commencement ceremony Saturday, May 21, at 10:30 a.m. The livestreamed event was held in the Kenyon Athletic Center. A transcript of Green's speech is available here.

"You are probably familiar with the old line that a liberal arts education teaches people how to think. But I think it mostly teaches you how to listen—in your classes and in your readings, you’ve been listening," Green said to the Class of 2016. "You’ve also learned here that your voice gets stronger the more you listen."

A double major in English and religious studies at Kenyon, Green is the New York Times best-selling author of The Fault in Our Stars and Paper Towns, both of which have been adapted into feature films. The YouTube video blog he creates with his brother, Hank, has received more than 600 million views, spawning a community of fans called “nerdfighters” who support causes to help “decrease world suck.” He also engages with his fans on social media, drawing more than 5 million Twitter followers.

The senior class chose Mike Durham, Kenyon’s substance abuse educator and counselor, as the Baccalaureate speaker. The livestreamed service was held May 20 on Samuel Mather lawn. "You are capable of great wonders. Your potential is unlimited. You are more than a human being, you are a human becoming," Durham said to the Class of 2016.

Following Baccalaureate, the graduating class members gathered on the steps of Rosse Hall to participate in the cherished Kenyon tradition of Senior Sing. Michael Durham, substance abuse educator and counselor, addresses the Class of 2016 at Baccalaureate. In his remarks at Kenyon's 188th Commencement ceremony, President Sean Decatur advises graduates to wade into their troubled waters. 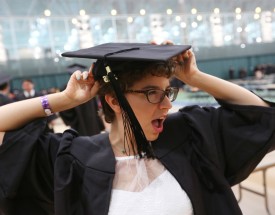 More about graduates' favorite moments from the 188th Commencement.
Join our path forward.
Give To Kenyon
Loading