Justin Roberts ’92 is riding the popular swell of “kindie” music. With nine albums of indie kids’ music and two Grammy nominations in the children’s category, he stands in the company of talents including They Might Be Giants (with whom Roberts is often compared), Barenaked Ladies, and Lisa Loeb—all turning out music for kids that pleases parents as well. Instead of being sticky sweet, kindie music is witty and smart.

The difference between Roberts and many other mainstream artists who’ve released kids’ music is that, for Roberts, children’s music represents the bulk of his success—and he’s happy with that. This is not a stepping stone to something else with more traditional commercial success. Like Willy the Whale in one of his head-bopping songs (“And, Willy, why you want to wive all awone in the desert/When, Willy, the fact is you’re a whale not a cactus”), Roberts has learned to do what he loves and what he does well.

While a Grammy win has been elusive—this year his Recess lost to Jennifer Gasoi’s Throw a Penny in the Wishing Well—he is critically acclaimed for his songwriting and performances with his band, the Not Ready for Naptime Players. The Washington Post called Roberts “the best of the bunch” in the children’s genre. USA Today described his music as appealing to “the young and the young at heart.” And the New York Times wrote that he has “a remarkable ability to see through a child’s eyes.”

Roberts’ songs study the details in life, the emotion in the most familiar situations. “Snow Day,” for example, tells the tale of hovering by the radio to see if school has been canceled. “Yellow Bus” offers a kid’s-eye view of waiting for the school bus. But his songs go a bit deeper, too. Yes, “Recess,” the title song of his latest album, is about recess, but with lines like, “There’s more beauty in the world than you could guess,” it’s also a reminder to take time to enjoy life and not just focus on the to-do list.

His songs might appeal most to the two- to eight-year-old set, but they possess an ageless quality as well. He notes that he has a bigger audience than most mainstream musicians. “A rock band has a much smaller demographic. Ultimately I’m writing for anyone from one to ninety,” he said, joking that junior high- and high school-age students may not be his biggest fans. “But we have grandparents  who listen to the music. I’m writing for all those people.”

Roberts takes his music seriously, but he finds plenty to enjoy outside of it. He relishes the theater scene in Chicago, where he lives (he’s divorced, no children), and especially smaller storefronts like The Gift Theatre and A Red Orchid Theatre, where Larry Grimm ’89 is a company member. Roberts started a project called Living Room Theater with Eric Ziegenhagen ’93, in which they present theater in residential apartments throughout the city and use donations to pay actors and for scripts.

He’s “obsessed” with French culture and has been taking French on and off at Alliance Française in Chicago and with private tutors. He’s traveled to France several times in the last few years. But, as with his music, there’s a certain playfulness even to his hobbies. “I also love to cook French meals where there is a lot of unnecessary straining of sauces and extra steps that you can’t quite figure out the reason for,” he said.

Another fascination for him has been philosophy. He came to Kenyon in 1988, convinced he wanted to be a philosophy major. “I was a weird high school person.” Classes with Donald Rogan and Vernon Schubel, both professors of religious studies, and Associate Professor of Philosophy Juan DePascuale led him to create a synoptic major in the philosophy of religion. Their teaching, he said, and his time on the Hill in general, play a big part in his songwriting today.

“I try not to teach lessons in my songs, but I think there’s a world view that comes across. I was very informed by my time at Kenyon,” he said. He mentioned his song “School’s Out” that documents the end of a school year with its accomplishments and losses. “It’s about time passing, being in the present moment, looking forward to the future. In these existential religion classes, those kind of ideas were in there.”

Music has always been the cornerstone of Roberts’ life. He was more interested in the record player than in playing with other kids when he was in preschool, to a point that the teacher pulled his parents aside to express concern. Instead of changing the behavior, they sent him to piano lessons and signed him up for choruses. By high school, he had formed a band that he called an “R.E.M. rip-off,” and they wrote their own songs.

When he got to Kenyon, he joined the Kokosingers and formed a band called Pimentos For Gus that he describes as “sort of alternative folk music,” playing everything from ballads to punk rock. “They were a big band on campus,” said Liam Davis ’90, who has produced all of Roberts’ albums—including one by Pimentos for Gus.

After graduation, Roberts moved to Minneapolis to teach preschool and continue making music with Pimentos For Gus. When the band split up in 1997, he recorded the children’s songs he’d been writing for the classroom and sent the tape to several friends, including Davis, who was producing music in Chicago.

“I thought they were really great,” Davis said of the songs. “I thought they deserved to be heard by as many people as possible, which I thought would probably be like 100 friends.

“We just kind of did it as a lark,” he said of producing Roberts’ first album, Great Big Sun. “We didn’t realize that it would be such a thing.”

Davis remembers his initial reaction to his friend’s early children’s music. “I didn’t have kids, so I was responding to the music itself,” Davis said. “When I was a kid, I listened to the Beatles because it sounded good. I can understand why kids are responding to it from a sonic perspective.”

Associate Professor of Psychology Tabitha Payne said her two-year-old daughter’s first concert was Justin Roberts when he played recently at Kenyon. It was music the whole family could enjoy. “A lot of kids’ music is high-pitch, squeaky voices,” Payne said. “It comes across as annoying. With Justin, the upbeat melodies with some humor and quirky perspectives remind us of They Might Be Giants, Phish, and Cake, bands we listened to in the 90s.”

Professional music critics agree. “He writes good power-pop songs,” said Stefan Shepherd, founder of zooglobble.com, a website that reviews family-suitable music, and the father of two. Music writer Jeff Bogle said, “The music is so energetic and poppy with amazing hooks and choruses. It’s earworm. It climbs inside you, and makes you want to move. You can’t help but fall for the melody.”

But it’s the words as well as the music that connects parents to Roberts, Shepherd said. “There is much more in his songs, subtext and lyrics, that works for the parents.”

Bogle, whose work can be found in Time Out New York Kids and on his blog, OWTK.com and who is a father of two, said Roberts’ music—and others in the kindie genre—fulfills a need for parents as much as kids. “Parents of my generation, mid-thirties, grew up with indie rock before it became background for iPod commercials. We had kids and wanted something more that wasn’t TV music or cartoonish.

“You want something you can pump fists with your kids, capture a piece of your own childhood. Now it exists.”

The Realm of Childhood

But parents’ interest in the music is only part of the reason the kindie genre has boomed. Money and technology also play a role. “The number of rock stars or those who can make a living has diminished,” Shepherd said. “The economics have led some people to say, ‘I’ll try other music.’

“Society has atomized a little bit. Everybody has their niche,” he said. “Kids’ music is just the same. People like me devote a considerable amount of attention to an otherwise marginalized category of music making. There’s still no mass market there.”

Few big music labels have a children’s category. On the other hand, home recording is easier than ever. “Anyone who is good at their craft can record an album at home,” Shepherd said. So while the quantity of children’s music has increased, the quality hasn’t necessarily—which may be why Roberts strikes such a chord with music lovers.

As for Roberts, kindie is where he’s at home. He credits his own musical inspiration as coming from melodic rock music like Elvis Costello, Big Star, Fountains of Wayne, the Beach Boys, and the Beatles. Lyrically, he’s drawn to singer/songwriters Ron Sexsmith, Nick Lowe, and Loudon Wainwright III (musically introduced to him by Schubel). But ultimately the biggest influence for him is life itself.

“There’s something about working in this realm of memory and childhood experience that really resonates with me,” Roberts said. “I’m first and foremost writing for myself because it has to be moving and meaningful for it to be worthwhile.”

It was love at first sound.

They have worked together ever since, from the early Pimentos for Gus cassette to the latest Grammy-award nominated album, Recess. The relationship represents mutual admiration.

“Working with him over the years, producing every single record, playing in the band, touring with him is a delight,” Roberts said. “I trust him implicitly, which is what you want in a producer.”

In the producer role, Davis said he’s the arrangement consultant, booking the studio and staffing the band. He is basically an artistic director for the albums, “like a movie director, but for a record.”

And within that capacity, say the critics, Davis is a star.

“Liam Davis is a genius in what he does with Justin’s songs,” said children’s music writer Jeff Bogle, founder of the blog OWTK.com. “From a hard-core music lover, what he does from a behind-the-scenes standpoint is unlike anything else in this world.”

Roberts is not the only music Davis produces. He works with other talent from singer-songwriters to punk bands. Right now, he’s producing work by Tracy Spuehler ’92—once part of the disbanded Pimentos for Gus—on music that he called “bright, funny, happy-
girl music.”

Davis makes music of his own outside of the children’s genre in a 60s-style band, which he said is like The Who, and in solo endeavors as well. His style? “Sad-boy music.” 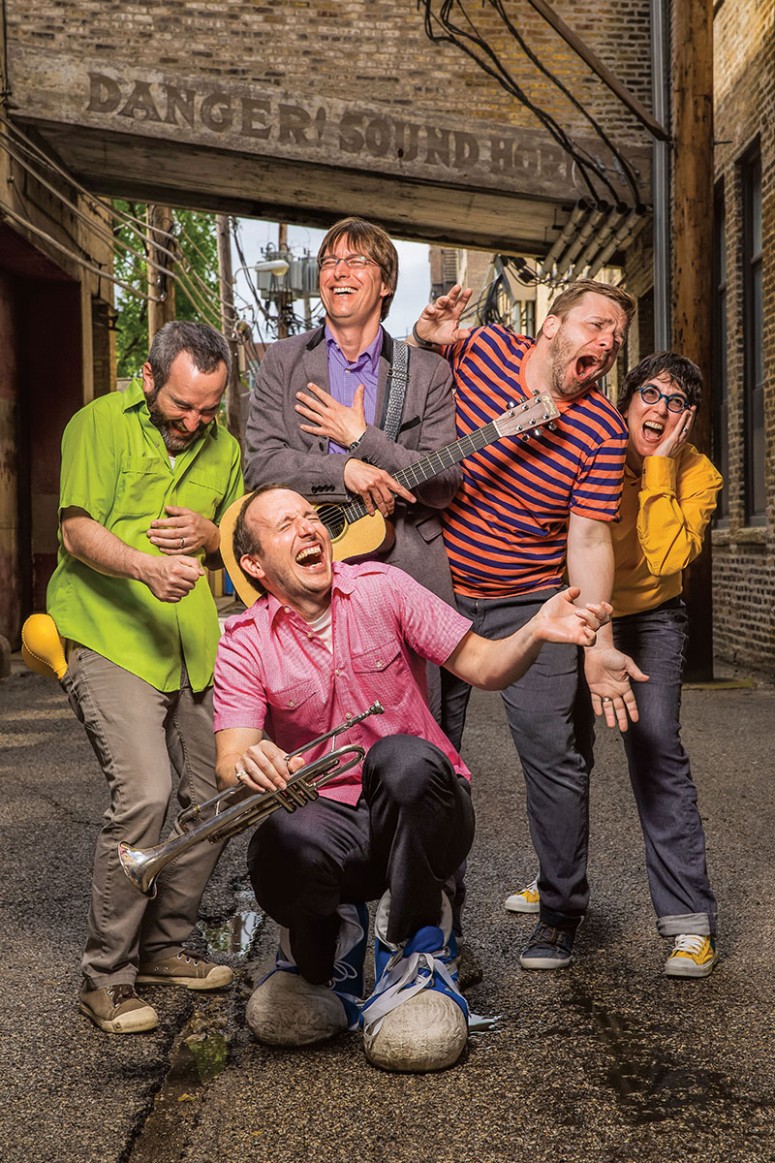