Immersed in the most pressure-filled contests of the season, the field hockey team, women’s soccer team and men’s soccer team delivered clutch performances that not only netted trophies, but automatic berths in upcoming NCAA Division III tournaments.

The Ladies soccer team began the day at Mavec Field by rallying from a 1-0 deficit to claim a 3-1 victory over the visiting Allegheny College Gators. Maggie Smith ’17, Gillian Blackwell ’18 and Becca Romaine ’15 scored Kenyon’s goals and propelled the Ladies into the NCAA tournament with a 12-7-1 record and the program’s first-ever NCAC tournament title. The road ahead includes a trip to Thomas More College on Saturday, Nov. 15, to tangle with Emory University in the first round of the national tournament.

Meanwhile at McBride Field, field hockey action got underway just one hour after the women’s soccer game started. The Ladies needed just one goal to put away the visiting Denison University Big Red. A goal by Maddie Breschi ’16 in the second half lifted Kenyon to its 12th consecutive victory. The Ladies will now take their 19-2 record into the NCAA tournament and will host a first-round game against Messiah College on Wednesday, Nov. 12.

Later in the day, under the lights of Ohio Wesleyan University’s Jay Martin Soccer Complex, the Lords soccer team earned its first win against the host Battling Bishops since the 2007 season. In dramatic fashion, Dalton Eudy ’17 scored the game-winner in overtime and delivered the first NCAC tournament title in Lords’ history. That win, along with a 17-1-1 record, gave the Kenyon men the right to host the first two rounds of the NCAA tournament, which will begin Saturday, Nov. 15 at Mavec Field with the Lords entertaining the Student Princes of Heidelberg University. 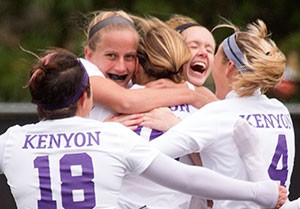