Daniel Torday ’00 published his first novel, The Last Flight of Poxl West, about a Jewish fighter pilot against the Nazis, narrated by his young nephew who adores him as a war hero and grand adventurer.

The title character writes a memoir of his escape from the Nazi offensive in Czechoslovakia, his love affairs, and his flights to bomb Germany as a member of the British Royal Air Force. Nephew Eli Goldstein begins to find that his idolized uncle romanticized some of the facts.

The book appeared on the cover of the New York Times Sunday Book Review, and Torday talked with Terry Gross on NPR’s Fresh Air about how the war still was a shadow in his childhood despite being two generations removed.

Torday, also a book review editor for the Kenyon Review, shares some thoughts on his novel and his Kenyon memories.

Your grandparents hid that they were Jewish for most of their lives. How did their decision color your writing?

Well, I'm not sure if I thought of it in quite these terms until right now, but I suppose there's just an almost foolish drive for honesty, for breaking down suppositions, that I'm always looking to bear out in a fiction. I mean, I don't want to psychoanalyze myself — then I'd have to charge myself $125 an hour — but maybe it has driven some of my aesthetics: No obfuscations. No style except style that pushes toward the greatest possible honesty. I don't mean I'd impose it on others in their work, only that it guides mine.

You've said that the question of whether you could tell a new story about the Holocaust weighed on you. People who have read your book praise it as a fresh take on the topic and World War II. How did you make sure it didn't blend in with the saturated field of Holocaust books?

I guess, in some ways, I honestly never did think of it as a "Holocaust" novel, exactly. That word pointedly never appears in Poxl at any point, and it's not used in any of the promotional materials for the book. I guess I just felt like I'd unearthed a particular story I'd not heard before about an aspect of a decades-old war, and had a familial connection to it, so that was the story. Sometimes your material picks you more than you pick it. Often. More often than not, even.

Could you describe your career path for Kenyon students and how it led to you writing your first novel?

I appreciate your thinking of it as a "career"! It's always felt more haphazard than that, and there sure has been a lot of providence. I was lucky enough to land an internship working at Esquire magazine the summer after my junior year at Kenyon, and then even luckier to find a job as an editor there a couple weeks after graduating. After a number of years there, I packed up and headed to get an MFA at Syracuse, where I wanted to sit at the foot of my favorite short story writer, George Saunders. He's got a good foot. Then I followed my amazing empathic talented wife, Erin Sullivan Torday ’99, down to Philadelphia, where she'd gotten into med school. I was lucky to find a job teaching at Bryn Mawr College, where I'm now director of creative writing. Which is all to say that you make your own luck, I guess, but there's also just a ton of luck involved. Also, patience.

What are some experiences from your time at Kenyon that have stuck with you?

I met my wife there. I met our best friends, who I still see all the time, one of whom is my older daughter's godmother and who is, to this day, one of my first readers of my work  — we met in a workshop my freshman year. On my first day of classes, Kim McMullen [John Crowe Ransom Professor of English] listened to me as if I had something new to say about T.S. Eliot's “The Wasteland” — impossibly generous! Everything changed in a flash. I took classes with the legendary religious studies professor Donald Rogan, the "superstar of nonfiction," according to David Foster Wallace; Lewis Hyde [Richard L. Thomas Professor of Creative Writing]; the editor of the Kenyon Review, David Lynn ’76; the legendary former editor of the Kenyon Review Philip Church; and with about 98 other life-changing mentors. I used to listen to [best-selling novelist] John Green ’00 type really, really fast, and really, really loud, right next to me in the library, and that's how I'd know he was there. I used to play pickup basketball outside the Bexley Apartments and feel a little embarrassed [Virginia Commonwealth basketball coach] Shaka Smart ’99 could see me from his apartment. I have an inexplicable love for central Ohio, its decrepit barns and hidden gorges, that will never flee me. Kenyon gave me the keys to the highway, a life, a family, a chance to read all of Faulkner, a minor in philosophy, a worldview, and a whole lot of purple T-shirts. What on Earth more could a person ask for? 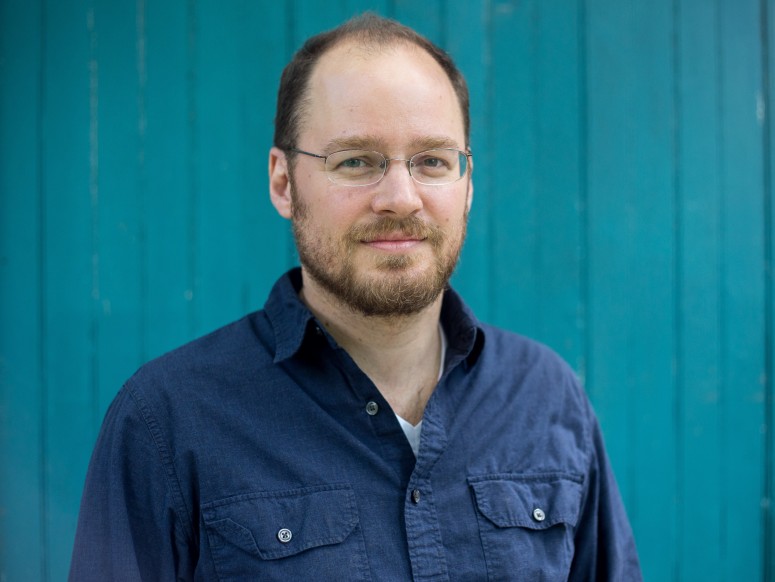