Washington Post criminal justice blogger Radley Balko filled an auditorium on campus to overflowing recently with the sights and sounds of police raids when making his case that American police squads have become too similar to military troops.

With about 150 people packing the Community Foundation Theater in Gund Gallery, Balko showed videos of raids during his talk Tuesday, Sept. 8, which had the same title as his 2013 book: Rise of the Warrior Cop: The Militarization of America’s Police Force. The presentation for Constitution Day was hosted by Kenyon’s Center for the Study of American Democracy.

Militarization is evidenced by the increasing use of SWAT teams with the same equipment as soldiers, he says, arguing that it encourages violence and causes more harm than it prevents. In one video of a raid that he showed, police fatally shot a suspect’s roommate, which forced some in the audience to look away. “This raid is actually very typical,” Balko said.

He showed a clip from a Fox News interview with a sheriff who instructed officers not to wear anything that would indicate their job while off-duty to protect themselves against police backlash. The idea that violence against police has increased is a misconception, Balko said, citing statistics that show the number of officers killed has declined since the mid-’90s, with this year on track to have one lowest numbers since the ’40s.

In an exercise Balko called “Cop or Soldier?,”  he flashed images of SWAT officers from around the country dressed in camouflage. SWAT teams, started in the ’60s  to handle rare events, now commonly accompany officers on raids of residences. The militarization is a result of poor law-making decisions, he said.

Kim Davidson ’18 said the talk was eye-opening. “As a flaming moderate, I appreciated both sides of the argument which were presented.”

Izzie Davies ’17 said she wants to read Balko’s book. “I felt like there was a lot I didn’t know, and it was interesting to see how it (militarization) got started.”

Full video of the event is available here. 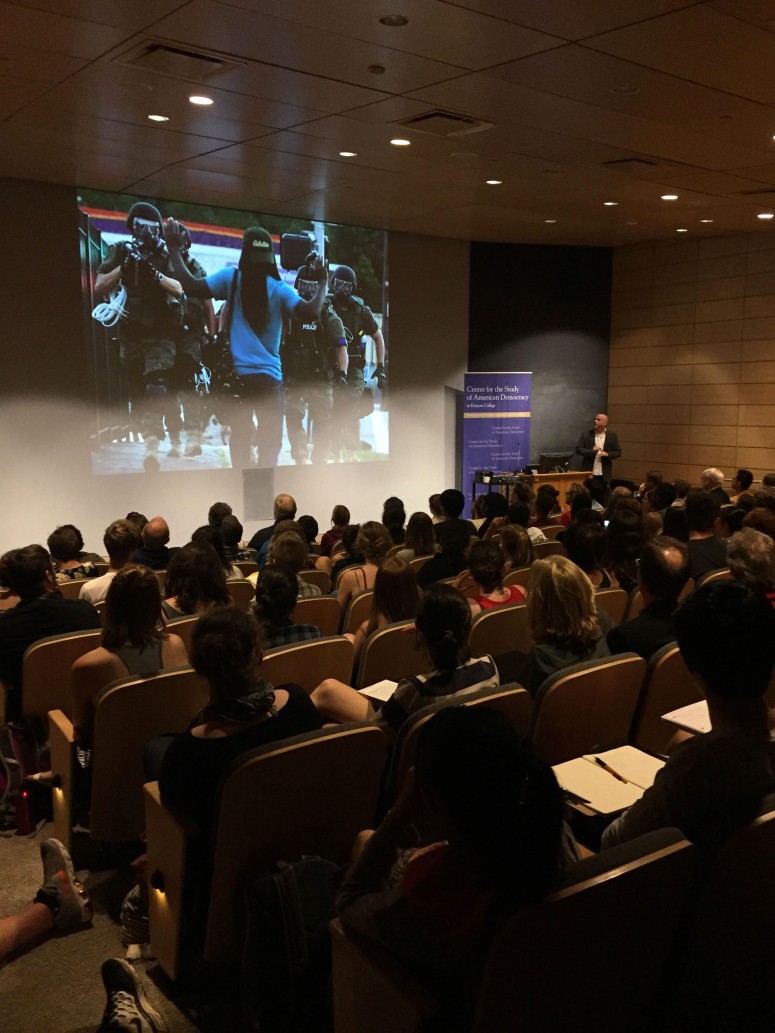