After graduating from Kenyon last spring, Andrew Tint ’13 spent his nights working in baseball and his days looking for a job to start his radio career.

Tint wrote game summaries and managed social media for the Newark Bears, a New Jersey-based Canadian-American Baseball League team, but his hope was to land an on-air job in radio. So he cold-called radio stations around the country.

His persistence paid off: In August, he was hired as the assistant manager at KRUU, 100.1FM, a solar-powered radio station in Fairfield, Iowa. In addition to reading the noon and evening news and helping with fund-raising for the non-commercial, listener-supported radio station, he hosts his own hour-long talk show called “Generation whY,” exploring news and issues relevant to millennials.

Tint found his passion for radio at Kenyon where he majored in religious studies. He worked with the Athletics Department, broadcasting games and a podcast with the coaches. In addition, he had an hour-long news show on student radio WKCO 91.9FM.

Marty Fuller, sports information director, said Tint came to him just when the department was trying to figure out Internet streaming. Tint wanted to broadcast soccer.

“It was good timing for us because we needed the help,” Fuller said. “He had a great passion for it. He did whatever we asked him to, probably even more.”

After the first year broadcasting soccer, Tint broadcast basketball and baseball, too.

Breaking into radio is notoriously difficult, and Tint faced the extra challenge of a speech impediment. He talked to those in the industry about his chances of getting on air, and remembers a conversation he had with legendary sports commentator Bob Costas.

“He told me, ‘If you’re good, you’re good,’” Tint said. He holds onto those words each time he’s on air, remembering to speak “extra slow” and to make a joke about the impediment as a clue to the audience.

For now, he’s happy at the station in Iowa, but ultimately he’d like to be in a bigger market. His dream job? Being a morning radio host in New York City.

“I think morning radio would be a lot of fun,” he said. “I love the news, have a passion for sports. But, right now, you take the job you can take.” 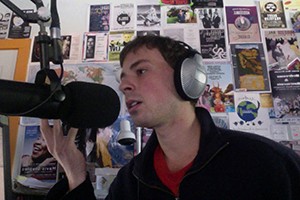