Complex love triangles and family drama collide at the Bolton Theater this week with the performance of The Seagull by Anton Chekhov. The production by the Kenyon College Dance and Drama Club is at 8 p.m. on Thursday, Friday, and Saturday.

"If it succeeds, it will move people at moments that might provoke them to ask questions about their own lives and the ways that they parallel the intelligently written reflection that is taking place on stage,” said the play’s director, James Dennen, assistant professor of drama and film.

The play takes place at a lakeside country estate and centers on Konstantine, a young playwright portrayed by Max Pescherine ’17 of New York City. Konstantine struggles to create theatrical art and earn the approval of his mother, a famous actress, but becomes enmeshed in a series of interlocking love triangles with other characters on the estate.

Issa Polstein ’15 of Maumee, Ohio, who plays Dom, said the play explores themes of the meanings of art and love. With its intellectual complexity and restlessness, he added that the play’s themes suit Kenyon, especially at this time of the year. “It’s a show that takes place during a very hot summer but everyone is just as miserable then as you would be in winter,” Polstein said. “I think there’s a definite sort of catharsis that you get out of the show that’s good for February at Kenyon.”

Dennen joined the faculty this academic year, making The Seagull his Kenyon directorial debut. In addition to a new director, more than half of the student cast is comprised of underclassmen, with two exceptions. Professor of Drama Ben Viccellio ’98 and Wendy MacLeod ’81, James Michael Playwright-in-Residence and professor of drama, anchor the ensemble, playing, respectively, a successful writer and a veteran actress.

"The cast has done nothing but impress me with hard work and great progress and surprise me with ideas and choices that I hadn't even imagined by myself,” Dennen said.

Working alongside Viccellio and MacLeod, Polstein said, benefits the student actors. “It’s kind of cool to see how people with experience go about this,” he said. “(MacLeod) is not an actress by trade. She’s a playwright, and she has really interesting contributions in terms of readings of lines or from a more literary perspective. That creates interesting conversations in the room.”

For Alex Minton ’17 of Sleepy Hollow, N.Y., , who plays Medvedenko, acting with professors in his first Kenyon theater production was intimidating at first. Those feelings subsided. “It’s just really exciting to be on stage with them,” he said. “They bring a level of professionalism to the show.” 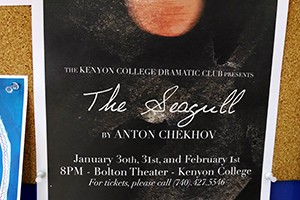