Having secured a six-figure book deal, Stephanie Danler ’06 is in the midst of fulfilling a classic Kenyon dream. But, for now, she’s still working as a waitress. Three weeks ago, the New York Times featured Danler thanks to her upcoming novel Sweetbitter, which tells the story of a young woman who arrives in New York, works at a restaurant and falls into a love triangle with her co-workers. Danler signed a two-book deal with Knopf Doubleday Publishing Group.

“It was very surreal,” Danler said. “I’m still working at the restaurant, and there’s this whole dichotomy between having signed this deal, but I’m at the restaurant still until the end of the month. So I’m still waiting tables.”

Danler began her Kenyon career as Stephanie Mannatt — a young woman who had been passionate about writing since childhood, and who enrolled at Kenyon in part because of its opportunities for budding writers. “I’ve been writing since I was about eight years old,” Danler wrote in an email to the Collegian. “In high school I wrote a short story and my teacher called me in after class and suggested that I pursue it. He was a Kenyon alum [Doug London ’74] and spoke highly of their writing program. Doug was instrumental in my considering and going to Kenyon.”

Settling into campus as an English major, Danler encountered a range of professors across the department. One whom she notes as instrumental in her development as a writer is Writer in Residence and Professor of English P.F. Kluge, who is also the Collegian’s advisor. “P.F. Kluge was tough on me in the best way, and I still hear his voice when I’m revising a sloppy sentence,” Danler wrote.

From Kluge’s perspective, Danler presented herself as a poised young woman with a vivid writing style when she took his Introduction to Fiction Seminar in the fall of 2003. “She was a lively and serious writer; you could tell that from the beginning,” Kluge said. “And she was, in a way, kind of mature for her age. She wrote sophisticated stories set in the world of young adults, with connections, betrayals, very densely and elaborately articulated.”

Kluge said that it is near-impossible to predict which students will make it in the writing world, but that Danler always had the focus and determination to push her forward. “Talent is promiscuous,” Kluge said. “There’s always plenty of it around. But does someone have the … commitment to taking a very long-shot chance on publishing in today’s world? Are they going to risk a couple of years of their life working on something, knowing that the chance of commercial or artistic failure is omnipresent? She, however, I think, did have that. And I think she always had that. And I think her time was coming, and now it’s arrived.”

Retired Professor of English Perry Lentz compared Danler’s record as a student in his yearlong American Literature course to another of Kenyon’s acclaimed authors. “Looking back at her record, it reminds me of the record of [young adult novelist] John Green ’00,” Lentz said. “Students with compellingly strong imaginations, and who really do seem to have … the disposition, the compulsion to be a writer, … they march to a different drummer, as one of the texts we read in American Literature says, and I think that’s sort of characteristic of her.”

After graduating in 2006, Danler immersed herself in a world separate from the realm of words and literature she found at Kenyon. “I fell in love with the world of restaurants — the food, the wine, the people,” Danler wrote in an email to the Collegian. She became a sommelier, or wine specialist, and manager at Tía Pol, and now waits tables at Buvette, both located in New York City.

However, she always kept writing.

“Even though my writing took a backseat to restaurant work for a few years, I never stopped thinking about it, and when I was accepted into graduate school I knew I was ready,” Danler wrote. “The restaurant world was familiar. I found the voice immediately; it was just a matter of working out the story.”

Now, Danler has proven more than capable of taking huge strides with her writing. While her novel Sweetbitter is still going through the editing process, Danler has the second installation of her two-book deal to think about come next spring.

“I am humbled by all of it,” Danler wrote. 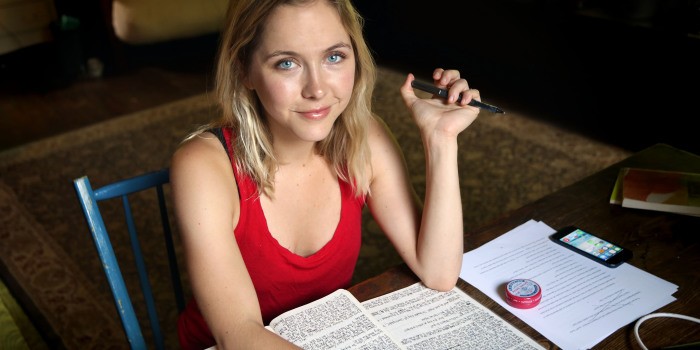 by Claire Oxford '18, the Kenyon Collegian