Those who drive up the gravel road to the Kenyon Farm are usually greeted by flocks of chickens, whose wandering and pecking stops only at the honk of a car horn, when all of the 60 or so heads raise and turn in unison toward the sound. Ducks waddle by, quacking noisily, and two goats stick their heads through the nearby fence, trying to get a closer look at visitors. The property buzzes with human activity, too, usually from the students who live in the farmhouse on the property.

The Kenyon Farm is a 10-acre student-run center just east of campus, integrated into the workings of the College food system. Eggs laid by the chickens are used for breakfasts by the Kenyon Inn. Vegetables and herbs grown on the land go into meals at Peirce. Sunflowers, once they bloom, will adorn tables of catered events.

The College purchased the farm in 2012 because it fit in with Kenyon’s commitment to sustainability, and agriculture resonated with some students as a possible career choice. “I’ve wanted to be a farmer since I was 4 years old,” said Aaron Naves ’16 of New York City who moved into the house on the property his sophomore year. Living on the farm means he’s able to work on his liberal arts degree – with a double major in classics and English – and gain experience as farmer.

Eli Redfern ’16, an economics and Spanish literature double major from Athens, Ohio, is interested in the non-monetary rewards of farming. “The Kenyon Farm shines a light on the fact that some jobs are just not that fulfilling,” he said, adding that farming is. “Even if you come for a day to do the work, it’s empowering.”

While the Kenyon Farm enlists the help of student and staff volunteers, the primary responsibilities fall to the residents. This summer, just Naves and Redfern occupy the house, but in the fall, three other students will move in.

The students living on the farm take on additional agriculture projects as they desire. Currently, they’re harvesting honey from a hive of native Ohio bees and coming up with ways to split the hive so it will produce even more honey. The students raised turkeys from pullet to slaughter this past year – and have a freezer full of turkey meat for their efforts. They’d like to start raising hogs, too.

The reality of the hard physical labor of day-to-day farming means some projects take longer to get started. The students divide daily chores into morning and evening shifts which include everything from feeding the animals, gathering eggs and watering the plants to building chicken coops and turkey tractors, all under the supervision of Dave Caldwell, a Gambier resident who works as the farm’s manager.

“My role is to make sure these things are done properly and that the kids have some instruction on how to plant and how to maintain the livestock,” said Caldwell.

The responsibilities at the Kenyon Farm are far greater than most other student centers, said Lisa Schott ’80, managing director of Philander Chase Corporation and adviser for sustainability and community initiatives.. “I explained to the students, ‘You are taking on a very serious extra-curricular activity that will be very time consuming with a lot of responsibility because you’re caring for live beings. You’re caring for animals,’” she said.

The students take the responsibilities personally. When one of the chicks that hatched last year was failing to thrive, Naves tucked it into his coat pocket and took it with him everywhere – including classes – to care for it. Today, it’s grown into one of the farm’s 60 healthy chickens. It’s what a caring farmer would do, he says.

Farming requires more than a few hours a day or even the commitment of a full-time job. It’s a lifestyle. “Farming is such a long-term cycle,” Redfern said. “It doesn’t adjust to semesters or summer breaks.” 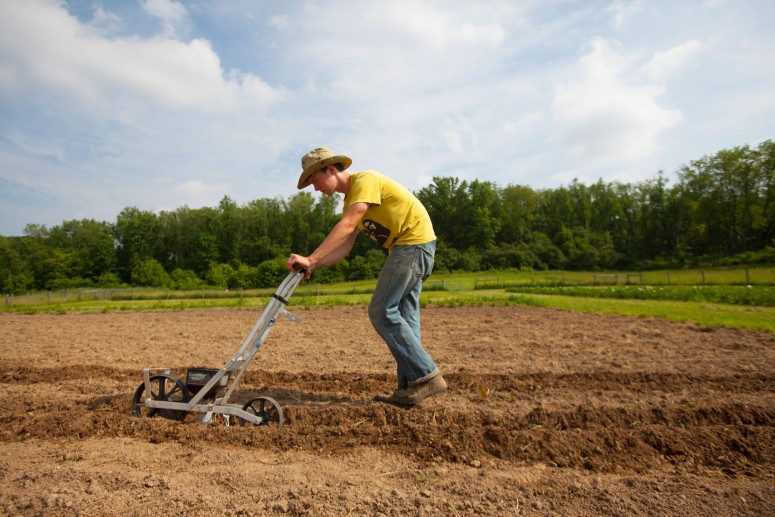