On Friday, Dec. 11, from 5 to 7 p.m., senior studio art majors opened the doors to their studios in Horvitz Hall for all to see the process and progress of their artwork.

“There is a diversity to what they’re doing this semester,” said Craig Hill, visiting assistant professor of art.

Hill and Professor of Art Claudia Esslinger teach the senior seminars, preparing the 16 art majors for their final spring exhibitions. The professors said attendees to the Open Studio event saw painting — both abstract and figurative — video, photography and sculpture, in very large and very small formats.

Themes varied broadly, from exploration of the outer world to self-discovery. “Contemporary issues certainly worked their way through,” Esslinger said.

Jackie Arkush ’16, who also is majoring in anthropology, put the finishing touches on a dollhouse-size re-creation of a classroom at Sandy Hook Elementary School where 20 first-graders and six teachers were killed in 2012. “Sandy Hook is the epitome of everything that is wrong with the view of mental health in this country,” said the Los Angeles resident. “I wanted to do something dark with miniatures. I wanted to remove them from the context of cute.”

Hill called her piece powerful. “The whole process of recreating the scene has an interesting psychological effect as she’s working,” he said. “It’s very familiar, and it’s really gut-wrenching.”

Chris McCann ’16 looked in the mirror for inspiration for his most recent artwork. Known for his photographs, the Locust Valley, New York, resident turned his camera on himself, producing striking images that he attached to wood blocks. “They’re not framed because I didn’t want another barrier,” he said.

Esslinger said the purpose was all about getting him to step in front of the camera. “I tried all semester to get him to do a self portrait, but he wouldn’t,” she said. “That’s exactly why he had to do it. He had to get beneath that skin.”

McCann said looking at the photographs was difficult. “At first I didn’t like them, but now I love them,” he said. “It feels so narcissistic, but I don’t care. I’ve never done something like this.”

Dylan Musler ’16, a double major in Asian studies from New York City, decided to go big — literally — this semester. She created large-scale figurative paintings with interpretations of Japanese rokurokubi mythology, which often features creatures that can stretch their necks to extraordinary lengths.

Her goal, she said, was to show that interactions between people are complicated. Some of the figures are smiling, while others show violence.

In addition to the senior studios being open and the downstairs gallery in Horvitz being filled with senior art, students from the “Installation Art” class showed their work, and pieces from other classes adorned the walls throughout the building.

Read Baldwin ’84 P’15 ’17, associate professor of art and department chair, said Open Studio was an event that was as interesting for Kenyon community members as it was for the seniors. “We always have big numbers through this building.” 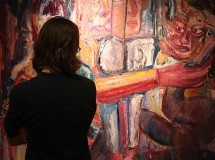 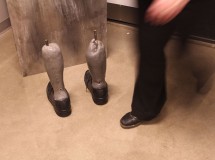 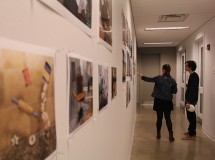 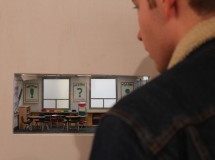 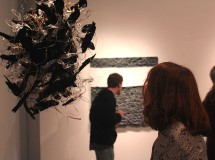 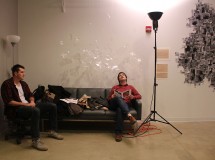 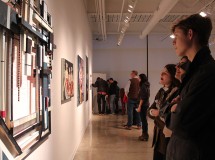