“Part of loving stories is loving people and honoring their experience,” says Jennifer Rudolph Walsh. She should know — as Executive Vice President and Co-Head of William Morris Endeavor’s (WME) Worldwide Books, Lectures and Conference Divisions, she sells as many bestsellers in a year as most book-lovers read. Of the 200-plus titles published each year by WME’s Worldwide Books Department, an average of 66 percent have made The New York Times bestseller list in the last seven years. So yeah, Walsh knows storytelling.

One of the world’s top literary agents, Walsh spoke with Bustle about her impressive literary career and her work with the groundbreaking women’s conference Together Live, which kicked off its second annual tour in September.

“I’ve always been very drawn to honest, heartfelt stories, whether they were fiction or nonfiction,” the literary agent says about the origins of her life spent among storytellers and their books. “People who share their lives from a vulnerable perspective create a magic energy for me and I’ve always wanted to be close to that.”

Walsh mentions just a handful of authors she’s worked with over the years: Ann Brashares of “The Sisterhood of the Traveling Pants”; Sue Monk Kidd of “The Secret Life of Bees”; Jeannette Walls, author of “The Glass Castle”; Alice Munro, aka: the world’s greatest living short story writer; and more — all authors I’ve read, and loved, and left room on my shelves for, for years. She’s also worked with some ceiling-smashing women: Arianna Huffington, Sheryl Sandberg, Oprah Winfrey, Brené Brown and Glennon Doyle — the writer with whom she created Together Live.

“I don’t see myself as an artist or a creator, but as somebody who can spot truth and who can see people who are spreading light in the world, and my ability is to build the highest platform for them, to give them the largest megaphone,” says Walsh. “I see myself as a partner in the creation; co-creation is my favorite thing. I’m not somebody who wants to sit alone in a room and come up with original thoughts, but I thank God for the people who can do that. I’ve been put in close contact with those people throughout my 25-year career, and I’ve been able to advocate for them, to spread the word, and to think creatively about connecting people and ideas to create something larger than one individual themselves.”

It’s this passion: for storytelling, for raising the voices of women and writers, for celebrating authenticity, and for bringing people together in powerful ways that acts as the foundation for Walsh’s work both at WME and on the Together Live tour. The tour, which features storytellers like bestselling author Glennon Doyle, actors Sophia Bush and Connie Britton, biomedical scientist Knatokie M. Ford, FIFA Women's World Cup champion Abby Wambach, and more, celebrates diverse, female voices and recognizes the power of storytelling to change the world. And, just like Walsh, Together Live is very much inspired by the literary world.

That’s one reason why book-lovers might be surprised to learn Walsh didn’t always love literature. “The truth is, I was not that kid with their nose in a book,” she says. “I was the kid in the back of the bus getting into trouble. I was kicked out of high school and told I failed to distinguish myself. That’s a bitter pill to swallow when you’re 17-years-old and you feel that you’ve already f***ed up so badly nobody even wants to recommend you to a college.”

Walsh did attend college, however, and it was there — at Kenyon College in Gambier, Ohio, where she earned her B.A. in English, and later an honorary doctorate — where she discovered the work of Maya Angelou and everything changed. “It wasn’t until I got to college that I found contemporary voices in fiction and nonfiction and I thought: ‘what the hell is this?’ I’d been reading old, dead men my whole life,” explains Walsh, of her transforming relationship with literature. “When I got to Kenyon College a professor gave us ‘I Know Why the Caged Bird Sings,’ which I loved; and then she told us that Maya Angelou was speaking in Columbus and we could all go. I was like: ‘authors are alive? You can go and hear them speak?’ I mean, literally, it was like in cartoons when the top of your head flips off — it rocked my world. It was a totally crazy concept for me.”

Listening to Walsh describe her experience attending Angelou’s reading, you can hear the first seeds of her career as a literary agent, and Together Live, being planted. “Listening to her [Angelou] speak and tell stories, I was holding hands with the person sitting next to me — who I didn’t even know — and sobbing. I was hearing my own story being told on stage,” Walsh says. “Even though the details of her story and my story had nothing in common, I knew I wanted to be as close to whatever that was as possible. It’s one thing to read it alone, but it’s another thing to hear it together. That was the first seed of my own breadcrumb of purpose.”

From there, Walsh accepted her first internship, at a company called The Writers Shop. Though the position was unpaid — a fact Walsh didn’t quite understand at the time — before her first month on the job she had negotiated her way into a $200-a-week paycheck. “It was my mistake, I didn’t know what the word ‘internship’ meant,” Walsh explains. “I wasn’t fancy, I wasn’t from a fancy place, so I thought I’d accepted a job. Working for free, that made no sense to me. But I’m the kind of person — I don’t care, if the floor needs to be scrubbed I’m going to scrub it. I just wanted to work my ass off.”

By the end of Walsh’s first summer on the job, she was hired to work for the company full time — still in her senior year of college, The Writers Shop let her work weekends, and sent manuscripts to her dorm room. After graduation, Walsh stayed, ultimately buying the company from her then-boss and mentor, and later selling it to William Morris.

“I began to see how my own passions, my own beliefs, my own fantasies, and my own life story were being told through the thousands of volumes of books I was representing,” Walsh says. “I could only take on things that I felt spoke to my heart or represented a part of who I am. So, my list was very small and very curated and really only included the people who I would go to the ends of the earth to protect and to advocate for — to amplify their messages. It’s the greatest honor of my life to be inside the creative process and to have the great blessing of shining a light forward for the people who I feel are changing the way we think and believe in the world.”

It’s clear from her energy, the tone of her voice, and her mile-a-minute storytelling that Walsh has unbelievable reverence for her career. She speaks like someone who, 25 years in, still can’t believe that she got this lucky, that this is really her life. But while rubbing elbows with folks like Oprah Winfrey and the Clintons might make some people exclusionary, Walsh clearly wants nothing more than to bring everyone along for the ride with her.

“One of the greatest privileges of working at WME is that it puts you in the most interesting rooms — including the Oval Office,” says Walsh. “There’s no room that being in this business has not given me the privilege of accessing. And there’s still this immigrants' child in me who just wants that for everybody. I had this incredible desire to take the wisdom from these small, elite rooms and shine it as far and wide as possible. I had a dream of democratizing this kind of wisdom and bringing it to people who need it the most and can afford it the least. The closer I’ve gotten to the greatest thinkers of our time, the more I want everybody to have that.”

And that’s where Together Live — an event held after the work day, in cities across the country that don’t often host such high-profile events, with ticket prices starting at just $25 — comes in.

“It feels like your kitchen table on the best night, with your best friends,” says Walsh of the tour. “There is just a joy and an easiness of the experience from start to finish. We’re all just sitting up on the stage in a puppy pile, listening to stories, holding hands, laughing, interrupting each other — that was our dream, but I didn’t know how that was actually going to manifest itself. But then it did, over and over and over again.”

Unlike many women’s conferences, Together Live is not about a work-life balance or having it all, but rather focused on convening women across diverse backgrounds and generations to share their raw stories, build community, take action and find self-love. The speakers are there to tell their own stories, promote intersectionality and espouse fierce authenticity.

“We really look for the most heartfelt, authentic people who are living their purpose out loud, and it’s very obvious to us when we see it,” Walsh says about the lineup of speakers Together Live assembles. “We’re not looking for people to get on the stage and tell other people how to live their lives; we’re looking for people who are going to get up there and share their own truths — who will allow our audience to live inside their questions, to reflect on what’s being shared, and to find their own way through all that, as opposed to someone who is just going to say: ‘here’s what you need to do.’”

And in a time of extreme divisiveness — politically, socially — a little big-hearted storytelling might be exactly what we all need.

“This is a vital, radical act of love, but it’s not political. I’m looking for opportunities to share similarities and move away from differences with people from all around the country,” says Walsh. “People are so hungry for meaning, and connection, and impact. All we hear is that the end of the world is coming, and that’s not the only story. It’s a true story, but it’s not the only story. When you don’t have the opportunity to hear stories about real heartbreak, addiction, betrayal, disappointment — and then also the flip side: triumph, connection, healing, elevation — if you don’t hear them, then you just think you’re alone in your process. Glennon Doyle and I even toyed with the idea of calling the tour Me Too, Me Too, because it’s in that 'me too' moment — when somebody says something that until then you thought was only true for you — when everything is illuminated. It changes everything.”

Based on last year’s tour, that “me too” moment really can change everything. “There were so many wonderful stories of people finding purpose,” Walsh says of her experience during the 2016 Together Tour. “There were stories of people coming alone and then leaving with a new connection, or returning home and changing their jobs, or changing a relationship, or finding something inside themselves that they’d always wanted to do but didn’t think they could. All from one evening. There’s nothing like it.” 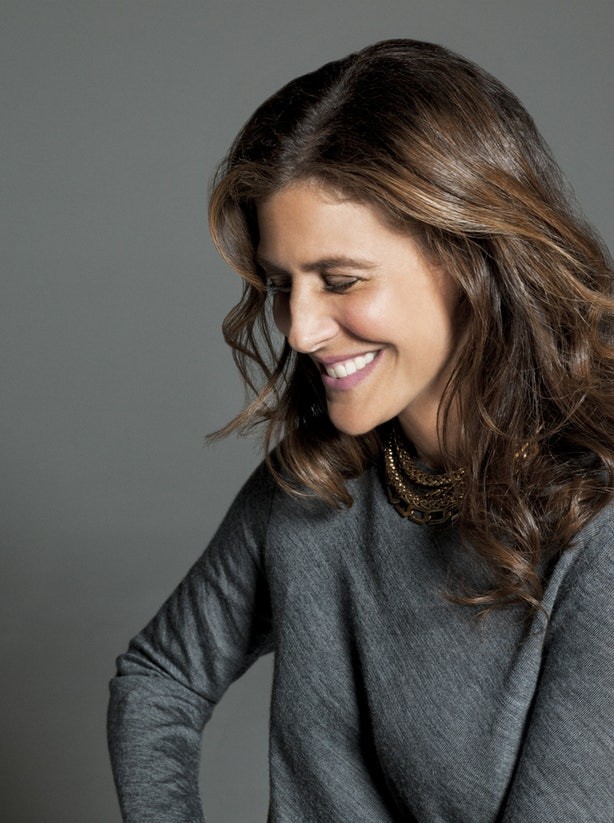