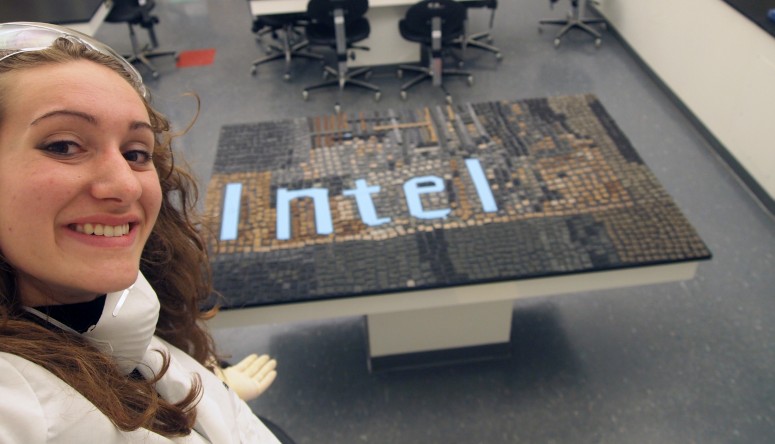 Jesseca Kusher ’19 wants to save the planet, one roof shingle at a time.

The first-year from Spartanburg, South Carolina, was recognized as a finalist at the Intel International Science and Engineering Fair for her development of a “sunscreen” for roofs to reduce production of ozone, a pollutant that thrives in hot conditions. She combined various minerals with clear roofing sealant, finessing a mixture that lowered the amount of heat absorbed by asphalt roofs. Her concoction was lauded for its environmental benefits — and its positive impact on homeowners’ air-conditioning bills.

Kusher brought her passion for research to Kenyon, already securing a position in the laboratory of Joan Slonczewski, Robert A. Oden Jr. Professor of Biology. She also is exploring her love for writing and theater, joining the staff of the Collegian and serving as president of Renegade, a theater troupe for first-years.

“The theater in many ways is like working in a lab,” Kusher said. “You have to really investigate every action you make in the same way you would do everything purposefully in a laboratory.”

Kusher is among the 493 students of the Class of 2019 contributing their talent to Kenyon. Also included in the class are:

When Cameron Messinides ’19 visited the White House last year, he was joined by a prestigious audience: his four fellow National Student Poets and First Lady Michelle Obama. Messinides, from Camden, South Carolina, kicked off a year packed with festivals, workshops and service events with a poetry reading in which he recited his work before Obama in the White House’s Blue Room.

“It was the biggest stage I’d been on,” Messinides said. “It gave me a lot of confidence moving forward into the rest of the year.”

A jury chooses National Student Poets annually from a pool of distinguished young writers who have won a national Scholastic Art and Writing Award. Part of Messinides’ work as a National Student Poet was to carry out a project benefiting his community. In partnership with the Peace Center in Greenville, South Carolina, he worked with White Horse Academy, a residential treatment program for adolescent boys who had been placed there as an alternative to juvenile detention. Messinides held workshops for the boys, advising them as they wrote and then read their own poems.

“That was an incredible experience. Just in the 15 or 20 minutes they had to write, they came up with some really, really brilliant stuff,” Messinides said.

Messinides hasn’t slowed down since starting at Kenyon. He is an associate at the Kenyon Review, and he blogs for WKCO, the student radio station. Messinides, a fan of visual art and graphic design, also plans to join the newly formed Kenyon Designers club. (His favorite font: “Amazing Grotesk.”)

If you ask Charlotte Gruman ’19 to recite lines from Angels in the Outfield, she could do it on the spot. Gruman, from Frankfort, Michigan, watched the movie almost every day after school while growing up in Singapore, passing the time until her parents came home from work.

“My amah (a housekeeper) had a VHS player in her room,” Gruman said. “She only had one VHS, and it was Angels in the Outfield. I watched that probably 17 times in a month.”

The movie sparked Gruman’s interest in filmmaking. Together with a friend from Michigan, Gruman won awards from the Michigan Movie Makers for She, a short film about a confused relationship that has garnered more than 400,000 views on YouTube. Gruman, who recently released another film, Georgia, strives to bring ordinary happenings into her work, describing her filmmaking style as “awkwardly realistic.”

“I really try to incorporate those breaks in conversation and times that people avoid bringing up the awkward stuff that nobody wants to talk about,” she said.

Gruman was familiar with the Hill long before move-in day, as her three siblings are Kenyon graduates. She is considering a major in art history and is already active with the Asia Society and the Council for Diversity and Social Justice. She also is hard at work on her latest film, Catalyst, due out next September.

No matter where he lives, Malik Ahmed Khan ’19 strives to make a difference in his community. Khan, who hails from Rawalpindi, Pakistan, appeared on national television in the country several times to raise awareness for various community causes, even performing magic tricks on air for an event supporting SOS Children’s Villages, a children’s charity. After experiencing racial prejudice while living as a teen in Glasgow, Scotland, Khan joined a sports group that focused on promoting racial integration and preventing discrimination. Now in Gambier, Khan is training to become a volunteer firefighter for the community, and with fellow members of the Middle Eastern Association, he helped organize an Eid dinner benefiting Syrian refugees.

“At Kenyon or at any place, you cannot just think about yourself,” Khan said. “You have to look around you, and you have to make sure that there is some societal presence to help those who may not be in the most favorable of circumstances.”

In addition to his work in the community, Khan has taken on a formidable course load this semester, pursuing interests in both economics and international studies. He also is exploring Kenyon’s variety of extracurricular activities and has plans to dress up as a zombie for an event at the upcoming running festival at the Brown Family Environmental Center.