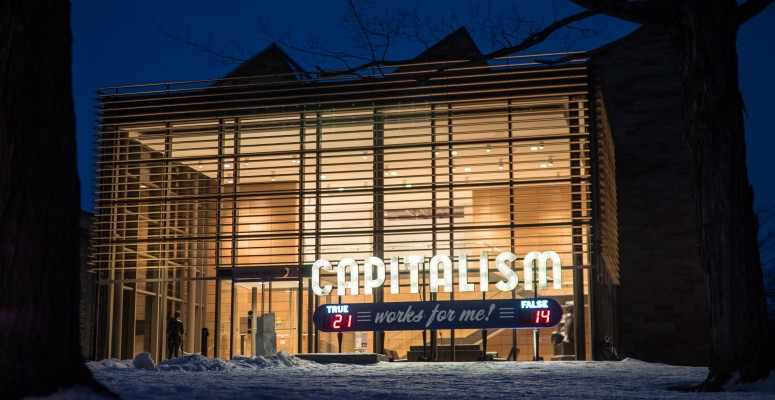 Conversations started from the moment Steve Lambert’s public sculpture was illuminated outside Gund Gallery. The sign's statement — "capitalism works for me" — and corresponding true/false poll sparked discussion around campus and on social media, particularly among students.

Chris Kwan ’16, a history major from Singapore, said the sign made him remember debates from the “Quest For Justice” class he took his first year at Kenyon. “All of my friends really have different views on capitalism and if it really is good for us,” said Kwan, who works as a student associate at the gallery. “But the one thing we all acknowledge, even if we don’t like it or like it, is that the only reason that a lot of us are at Kenyon is because of capitalism. If we didn’t have this economic system in place, we wouldn’t be able to afford to come here.”

At a stand in the lobby of the gallery, visitors can vote on whether they think capitalism works. The sign shows the daily tally of the number of people who voted true and false.

Alex Benthem de Grave ’16, a political science major from Princeton, New Jersey, said he liked that the sign didn’t take a side but instead sparked conversation. “I can identify with the people who said yes [to the poll],” he said. “But why are people saying no? I think it was a positive way to start a dialogue. It seems like people started a dialogue about it sort of anonymously at first. But that’s a nice transition to people actually discussing it on campus.”

The discussion was exactly what Natalie Marsh, director of the Gund Gallery, had in mind when she planned the “Resistance & Revolution: Responses in Contemporary Print, Technology and Community Activism” exhibit. “It’s provocative in its placement,” she said of Lambert’s piece. “But I didn’t know exactly what the response would be.”

Lambert’s sign serves as the entry point to the rest of the exhibit, which features a range of works by various artists on display through March 8. Intaglio prints by Enrique Chagoya, mass-produced prints by Shepard Fairey and additional works by Lambert offer visitors a look at politically engaged art from the last decade. Marsh said the inspiration for the exhibit came from contemplating the visual images from the Occupy movements a few years ago, along with current events such as those in Ferguson, Missouri.

“I wanted students to get some historical perspective, reminding them that there have been prior time periods leading up to our current moment,” Marsh said. “And that our current moment allows us some exceptionally creative options to be exploited in dynamic ways online and enabled through these distribution systems.”

Sarabeth Domal ’15, a studio art major from Avon-by-the-Sea, New Jersey, said the exhibit not only has started conversations among her friends, but also has influenced her own art. “I don’t deal with anything political [in my work],” said Domal, who works as a student associate at Gund. “But I’m focusing on time and memory in my photographs. I think the longer that you look at these works, the more you will understand their general context. And that’s how I want mine to be viewed as well.”

She hopes students take the time to visit the exhibit as a whole, not just comment on the sign outside the gallery. She said, “I hope that they come in and check out the exhibit because it brings up different topics in politics that I definitely think people should look into more.”