Summer Sendoff, the annual end-of-year party hosted by Kenyon’s Social Board, features musical acts, food, freebies and a whole lot of excited students (plus, of course, beer and wine for those over 21). In recent years, Social Board has been able to secure some big-name acts, including Chiddy Bang, Logic and Danny Brown. This year, the featured artist was Bas, with Brasstracks as the opener. The event serves as a much-needed break from coursework and other commitments that always pick up at the tail end of the semester.

Self-described as “HORNS, SYNTHS, DRUMS” on their Facebook page, Brasstracks opened Summer Sendoff just past 7 p.m. Listening to their newest EP, “Good Love,” their self-assessment is quite accurate. The songs on this EP all have a very similar composition: heavily synthesized strings, horns and drum tracks provide the rhythmic foundation of most of their tunes. Many of their songs feature vocalists such as Masego, Roses Gabor and Jay Prince. The song structures tend to follow the ABABCB pattern that is common in pop music everywhere. Most of the songs are high-energy and up-tempo – two qualities that are perfect for “party” music. I am usually a fan of anything under the “dance” or “electronic” umbrella. Thus, I was quite intrigued to hear that Brasstracks fit into this category. As soon as they took the stage and that trumpet blasted out its first few notes, I knew I was going to enjoy their performance. The two words that I believe describe their sound best are “electronic funk.” They combine all the groovy aspects of a large brass section from a jazz or big band with the 808 drum tracks and synths of newer electronic music. Their unique sound is extremely catchy, and the funkadelic duo of Conor Rayne and Ivan Jackson were a huge hit with Kenyon students on Friday night.

Check out two of Brasstracks’ best songs from Friday night: “Say U Won’t” and “Good Love,” both off their newest EP, “Good Love.” 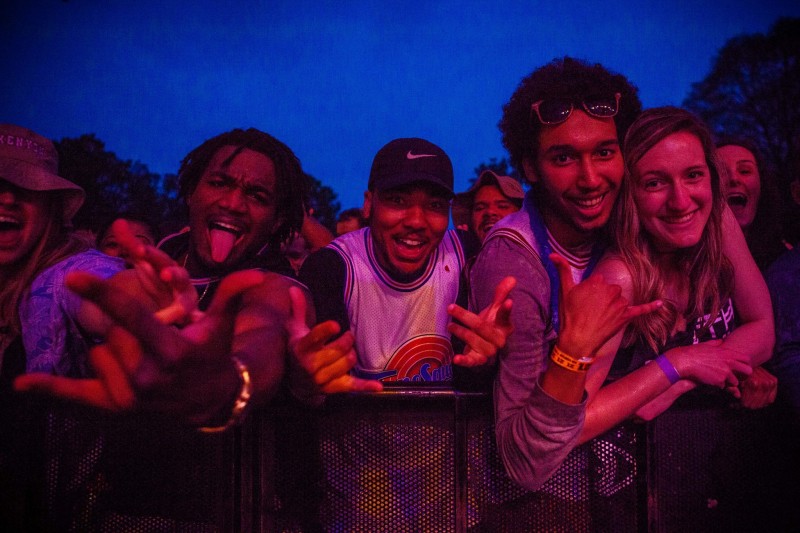 After Brasstracks set the tone for the evening, Bas took over the stage. This 31-year-old rapper, born and raised in Paris, didn’t even begin rapping until 2010. Since then, his popularity has grown exponentially. He is signed to J Cole’s Dreamville Records and has produced numerous songs with the boss of the record label. Bas has released two full records under this label, “Last Winter” in 2014, and his most recent release, “Too High to Riot,” in 2016.

After Brasstracks finished their set, rain started to fall, and by the time Bas took over the stage, it was a downpour. Still, Bas had no problem engaging the crowd. He took the stage with incredible energy with his opening song, “Too High to Riot.” He continued to work through his catalog, playing hits from his two albums and putting on an excellent show despite the atrocious conditions. Unfortunately, the performance was cut short after about 45 minutes due to the potential for severe weather.

Check out “Too High to Riot” and “Clouds Never Get Old” by Bas. Overall, myself and the majority of the student body eagerly awaited this past Friday afternoon, and we were not disappointed. Not only did students enjoy the free swag, food, and performances by Brasstracks and Bas, but Sendoff’s arrival also marked the beginning of the end of the spring semester. This means that seniors start come to terms with their graduation plans just weeks away. Juniors and sophomores anticipate their summer plans and internships. First-year students begin to realize they’ve almost completed their first year of college. This celebration represents a different rite of passage for each group of students involved, but one aspect of its significance is consistent across classes: summer is almost here.

Photos by Jack Zellweger ’17 for the Kenyon Collegian (Instagram: @zellwegerphotography)