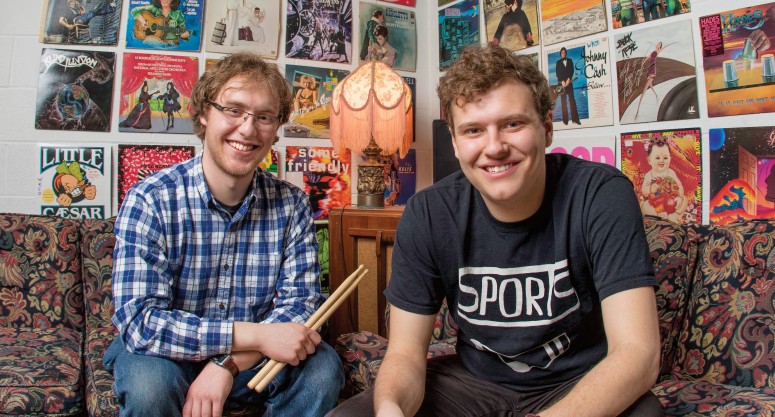 The smell hits first — a mix of junked papers and leftovers from lunch, with a hint of dreaming rock stars huddled in unventilated quarters for a few hours too long. On one side of a cavernous room, couches and old record covers line the walls; on the other, a long hallway leads to a maze of nooks filled with CDs and stray cables. Somewhere deep inside, two students giggle.

Welcome to the home of beloved Kenyon radio station WKCO and its equally prized, albeit less well-known, student-run recording studio. Cluttered with cables and spare drum-kit parts and decked out with sagging strands of holiday lights, the narrow studio retains the offbeat bravado of the broadcast and sound tech booths, which connect to the studio through two glass windows.

The masterminds — and co-managers — of the recording studio are Seth Reichert ’17, a music major from Bozeman, Montana, and Teddy Farkas ’16, a film major from New York City. Together, the duo has captured the sound of dozens of Kenyon musicians, storytellers and a cappella groups, boosting the campus music scene along the way. This spring alone, Reichert and Farkas worked with singer-songwriter Amanda Goodman ’18, indie rock band Park Strangers, a cappella group Take Five, a group of peer counselors and singer-songwriter Rioghnach Robinson ’16, among others. They even record in spaces around campus, packing up their microphones and soundboards for gigs in Storer Hall, the Horn Gallery and Ascension Hall.

The wide array of recording opportunities across campus tests the ability of Reichert and Farkas to consistently register the best sound possible. Artists’ personal styles and the acoustics of rooms around campus can differ drastically.

“A solo album presents a challenge in that you have to present it very cleanly and crisply but in a way that’s also interesting when you only have a guitar and a vocalist,” Reichert said. “It’s also a challenge when you’re recording a live eight-piece band in the studio and it’s loud and there’s drums and you have all these other things to think about.”

While mastering the art of recording, Reichert and Farkas have contended with failing equipment. A push by students in 2009 yielded some newer tools suitable for recording a cappella groups around campus. But interest in learning how to use the devices lagged, and by the time Farkas and Reichert arrived on the scene, much of the newly purchased gear had fallen into disrepair.

The two labored to bring the studio up to snuff, lobbying the student government for funds to upgrade older hardware. They added more than a dozen microphones, sound absorbers, a soundboard and even a drum kit. (Members of Walk the Moon are rumored to have swiped a floor tom from WKCO’s kit during their heyday in Gambier — the drum has since been replaced.) Bands appreciate the availability of WKCO’s equipment, as it occasionally is superior to their own.

“The drum kit that we play on I bought from the ADs [Alpha Delta Phis] for a case of beer,” Noah Weinman ’16, a member of the band Park Strangers, said. “It’s not great — $15 for a drum kit. But the WKCO kit is pretty nice.”

Farkas himself had not touched a soundboard before arriving at Kenyon. After coming across WKCO’s table at the student activities fair his first year, he began attending staff meetings and quickly became engrossed in the mechanics of the station and studio. Reichert, who dabbled in sound work in high school, built his chops through a WKCO internship his first year at Kenyon.

Booking a recording project through WKCO’s studio is simple — and free. Students email Farkas and Reichert stating their interest, and the co-managers work out a schedule and walk them through the steps to creating a masterpiece. Recording an entire album can require a significant time commitment — it took Farkas nearly 30 hours to capture tracks for a recent Park Strangers album before he and the band started mixing and editing the tracks together.

“Teddy has been with us every single step,” Weinman said. “We don’t really view [the album] as so much a product. At this point it’s a learning experience.”

“This is more just for the students than for us,” Farkas said. “All the work I do here, it’s totally free.”

Despite their success, both Farkas and Reichert know that their time at Kenyon, and at the studio, is waning. Even the location of the studio itself is in flux. As part of Kenyon’s Master Plan, Farr Hall, home of WKCO since the 1960s, is expected to be demolished, and a search for a permanent home for the studio is ongoing.

“One of the difficulties of running a campus organization, especially at a small school like Kenyon, is that there’s such a high turnover,” Reichert said. “Every four years, someone new is in charge. The trick at this point is, how are we going to find people who can take that on when we’re gone?”