Sam Geier ’16 notched the clinching point Sunday, May 15, and the Lords marched on to the quarterfinal round of the NCAA Division III men's tennis tournament after defeating the Case Western Reserve University Spartans, 5-2, at Medical Mutual Tennis Center. The victory pushed the Lords into the Elite Eight for the sixth time in the last nine seasons and for the first time since May 2013.

Kenyon, which currently owns a No. 17 national rank, will next take on No. 1-ranked Emory University on Monday, May 23, in Kalamazoo, Michigan. The winner will advance to Tuesday’s semifinal to take on either Johns Hopkins University or Bowdoin College for the right to play in Wednesday’s championship match.

In order to advance as a team, the Lords crafted a quick rally to overcome Case. The Spartans claimed the early lead as they won two out of the three doubles flights. Kenyon's lone doubles point came from the No. 3 pairing of Nicholas Paolucci ’19 and Mike Roberts ’17. They won by an 8-6 count over John Benedetto and David Zakhodin.

As the teams forged ahead to singles competition, Paolucci posted the Lords' second match point, defeating Case senior Louis Stuerke in straight sets. Max Smith ’18 followed up with another straight-set win for Kenyon at No. 6, as he rolled 6-4, 6-0.

After turning a 2-1 deficit into a 3-2 lead, the Lords moved one step closer to victory when Robert Turlington ’16 beat Robert Stroup rather handily 6-2, 6-1 in the No. 3 match.

In what turned out to be the deciding match, Geier, the top-ranked player in the Central Region, came through against third-ranked C.J. Krimbill. Geier won by a pair of 7-5 scores and gained the closing point as Krimbill's final forehand crosscourt shot drifted wide.

Kenyon (14-9) is no stranger to Emory (22-3). In February, the Lords lost 8-1 to the Eagles during the first round of the Intercollegiate Tennis Association’s Indoor Championship. In 2012, Emory defeated Kenyon, 5-3, in the NCAA Championship match. 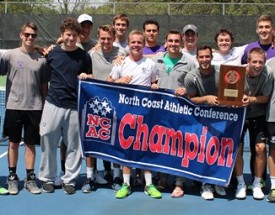 Ten in a Row

More about the tennis team's 10th NCAC title.
Join our path forward.
Give To Kenyon
Loading