Editor’s note: In anticipation of Emmy award-winning set designer Jim Fenhagen ’76 visiting campus, we are republishing a 2011 Alumni Bulletin article about him. Fenhagen will talk at Common Hour Thursday, April 2, at 11:10 a.m. in the Owen York Lecture Hall of Tomsich Hall. He also will be visiting classes in the Dance, Drama and Film Department.

He's a 1976 theater major who has won 17 Emmys. His work has appeared on major television networks from ABC to VH1. President Obama complimented his work on-air. And you've probably never heard his name.

Fenhagen has also designed sets for The Daily Show with Jon Stewart on Comedy Central, which led to his highest-profile compliment to date. President Obama visited The Daily Show Indecision 2010 program in Washington, D.C., and when he sat down with Stewart, his first comment was "nice set." "Of course, we've got that one on tape," Fenhagen says with a laugh.

“It's hard to know where I will get inspiration — art and architecture play a part, and so does industrial design," said Fenhagen, who is part of the brand experience agency Jack Morton in New York City. For the design of Morgan's desk, for example, he found inspiration sitting on his own desk. "I was looking at the curved metal base of my iMac computer — I just love that shape. I based the front of Piers's desk on that."

Fenhagen credits Kenyon for introducing him to set design as a career. He started as an art major, interested in becoming a painter. "But it was too solitary in my little artist's garret, painting away late at night by myself."

He switched to theater, originally focusing on acting. But his interest in art and painting eventually led him to set decorating. Fenhagen counts Daniel Parr, a former drama professor at Kenyon who died in 2002, as a great influence on him. Fenhagen started out helping Parr create the sets of many productions on campus. He says he did a little bit of everything: carpentry, painting, finding and producing props. He remembers one production where there was a scene in a modern apartment that called for paintings on the walls. "I ended up having to paint about 12 abstract paintings on relatively short notice. Some of them ended up being pretty good," he said.

After Kenyon, Fenhagen went to graduate school at New York University, and graduated just as cable television was taking off, creating a great demand for set designers. Much of his early work was on children's programming, where he won his first Emmy for designing the set of the PBS show Where in the World Is Carmen Sandiego. "Children's television was a great place for me to start because it is very theatrical and merged my theater background with my new interest in television," he says.

Many more Emmys have followed, including ones for NBC's The Martha Stewart Show and PBS's Between the Lions. "I do pinch myself sometimes. I can't believe I've won that many Emmys," Fenhagen says. "I've had some great opportunities."

While he has worked on many types of sets through the years, he has really made his mark on news programming. One of his proudest moments came in April 1988 when ABC's Nightline, hosted by Ted Koppel, did a town-hall-style meeting in Jerusalem featuring Palestinians and Israelis debating issues on stage together. In order to address concerns of the Palestinian representatives, Fenhagen designed the set with a low wall separating the spaces where the two sides sat on stage.

"Ted began the show by mentioning the wall and saying it represents the divide between the two sides and that they were going to try to cross it. And he puts his foot on the wall, flings his leg over and jumps over to the other side. He used the wall as a metaphor. That was a very important moment for me," Fenhagen said.

Working in news has been a particular challenge, Fenhagen said. "In theater, you have a script. A playwright has written something, and as a set designer you're interpreting it. But there's no script for news shows."

What he tries to do is find some unique feature for a set so that, when viewers see the program, "they know that they can only be watching that particular show." The background wall for Piers Morgan Tonight is a good example.

"Trying to find something iconic to build on is always important in set design. You take that one unique idea and filter that into all the rest of the design. You need to have the right feel for the right show." 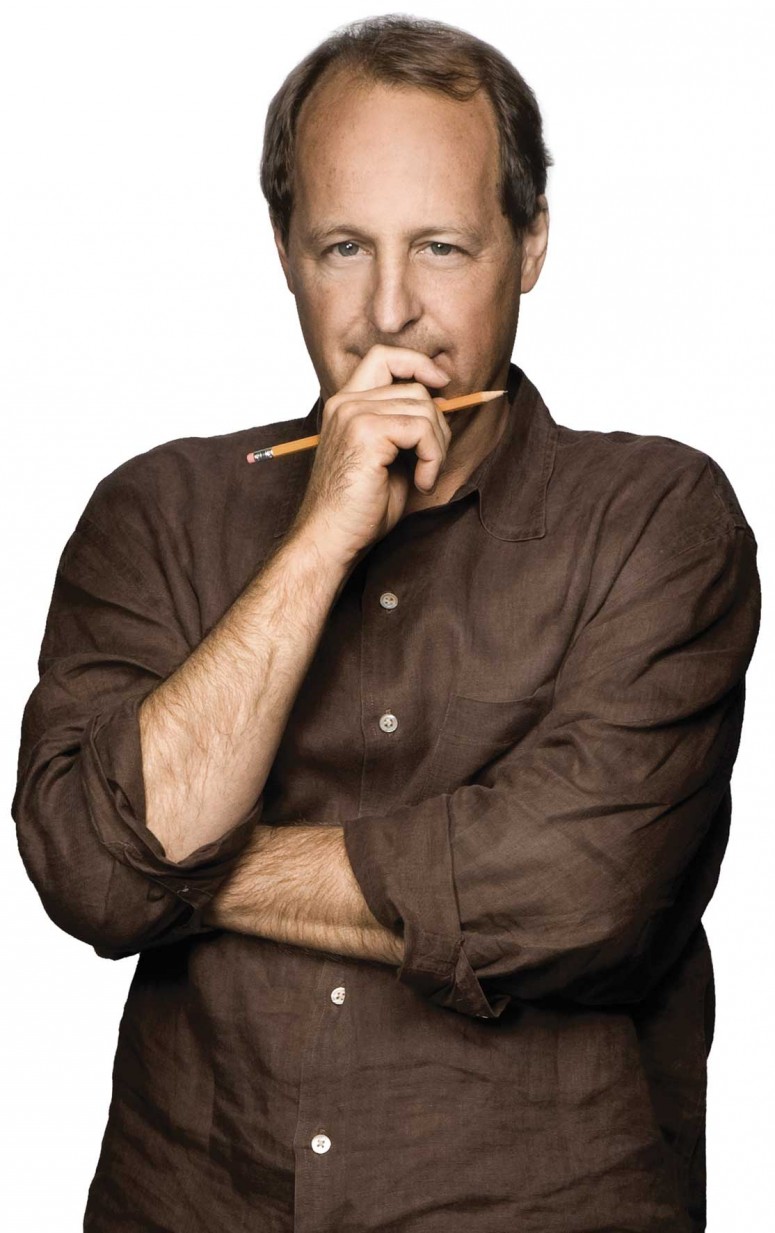 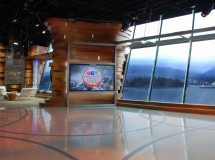 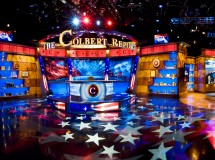 The "Colbert Report" set spoofs a news anchor's desk. The backdrop depicts subtle spokes of light radiating from the star's head, which helps him get into character, Fenhagen says. Shelves contain in-jokes for the observant, such as photographs of failed Supreme Court nominees Robert Bork and Harriet Meiers and books with titles like "Chicken Soup for the Military Soul." While creating the set for "Countdown with Keith Olbermann," Jim worked directly with Mark Rosenthal '73, who recruited Olbermann to cable network Current.