One of three Kenyon friends who started a grilled cheese cart works the griddle, sizzling sourdough with organic cheddar from a nearby dairy farm. At busy times, another takes orders and calls out “cheese on wheat” or “chocolate on white” to the assembly person, who slaps cheddar slices or sprinkles chocolate chips between bread.

The three seniors, Lucy Adams, Michael Buse and Cathy Mayer, started The Mad Cow food cart because they wanted more choices for late-night eats on the weekends. Since the beginning of the semester, they have set up the cart about one night a week outside of Gund Commons or another spot where a party or event is happening.

They priced the grilled cheese at $5 and chocolate sandwiches at $3 to offer an affordable snack with high-quality ingredients as an alternative to other food options, such as the Village Market grocery that closes at midnight or delivery of wings, pizza, and fried mac and cheese wedges from the Gambier Grill.

Buse, a history major from Clayton, Missouri, said some people think of the disease when they first hear the cart’s name. “Some people over the age of 30 think we’re being ironic about the name, but we really meant no affiliation to mad cow (disease),” he said. As they worked over the summer to get Health Department certification and Kenyon’s permission, they added potential business names to a document. They took turns deleting names until only one was left.

The students turned to the online crowdfunding platform Kickstarter this summer to raise money for their startup, securing $2,000 in a month, double their goal.

“It sort of validated what we were doing, and it (the business) had an audience that supported it and wanted the same things we did,” Mayer said.

With Adams and Buse on campus over the summer and Mayer working remotely, they consulted with Fred Linger, manager of business services at Kenyon, who connected them with their cheese supplier and gave them access to the Peirce Pub kitchen, where their food is stored and prepped.

The farmer who sells them the cheese, Doug Daniels of Meadow Maid Dairy in Fredericktown, operates his own food stands and loaned them the cart to use for free. They also sell Daniels’ soft-serve ice cream on occasion.

The sandwiches have fresh-baked bread — sourdough is the cart owners’ favorite — from Lanning’s Foods, a popular food supplier in Mount Vernon. The sandwiches are browned without butter, and customers can embellish with a special ingredient that often comes from the Kenyon Farm, such as zucchini-based slaw. Avocados grown at Mayer’s house in Santa Monica, California, were the extra option the night of the cart’s debut in August.

“It’s really simple,” said Adams, of Hastings-on-Hudson, New York. “As long as you have good ingredients, it’s not that hard.”

The Social Board, which plans concerts, dances and other events on campus, paid the cart Sept. 4 for 150 grilled cheese and 75 chocolate sandwiches served at dinnertime before a film screening. The business went through 25 pounds of cheese and 20 loaves of bread, nearly selling out, Buse said. The cart had steady business, with students often producing a chorus of compliments as they tasted the crispy sandwiches oozing with cheese or chocolate.

The three said the business has been profitable for them in its short existence, and they have hired student workers to help out.

Adams, Buse and Mayer plan to run the cart whenever the weather permits, taking a break during the winter. They post their plans on social media; a recent Instagram advertised a special: “Four cheeses, three pieces of bread, one happy stomach.” 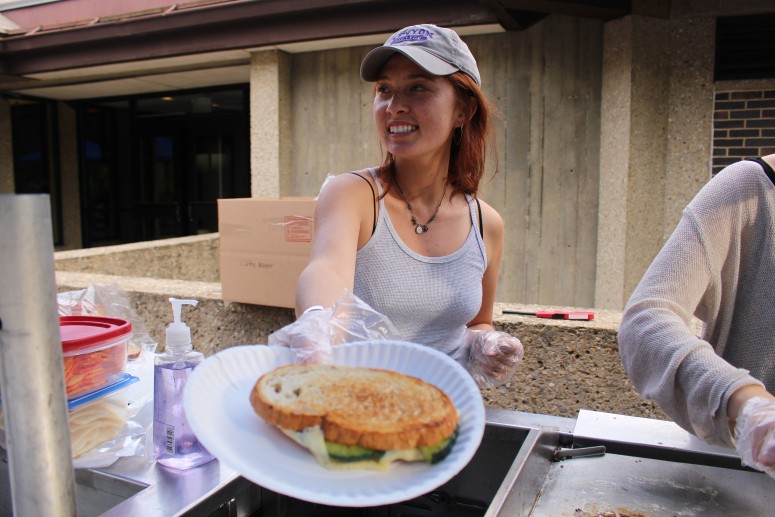