Stage manager Katie Stevenson ’21 looks up at the lights above the stage from the Bolton Theater control room before a rehearsal of “The House of Bernarda Alba.” Directed by Visiting Assistant Professor of Drama Tom Aulino and performed by an all-female cast, the Kenyon College Dramatic Club (KCDC) production opened Oct. 17 with four performances over three days.

Stevenson flips through her stage notes in the control room before the last performance of “The House of Bernarda Alba” on Saturday evening. Arriving an hour before the doors open, Stevenson moves with expert efficiency as she preps the stage, crew and cast before the audience arrives. A view from the control room as the cast runs through warm-ups in full costumes. 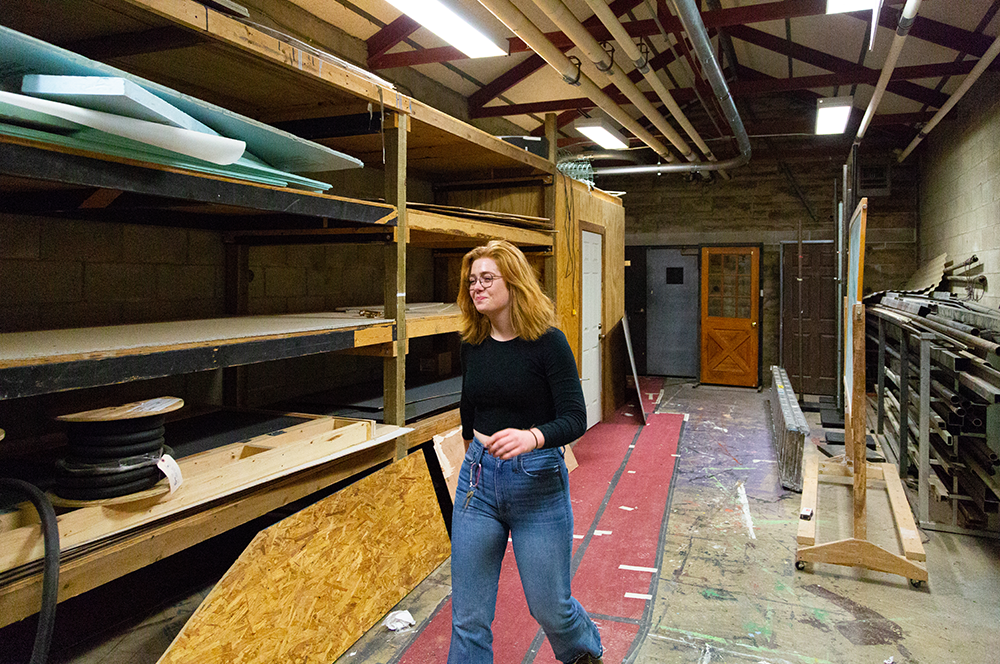 Before the show, Stevenson is in constant movement backstage as she walks between meetings with the cast and crew. During a quick stop in the dressing room, Stevenson (left) has a conversation with Maggie Perkins ’20 (right), head of the costume department. 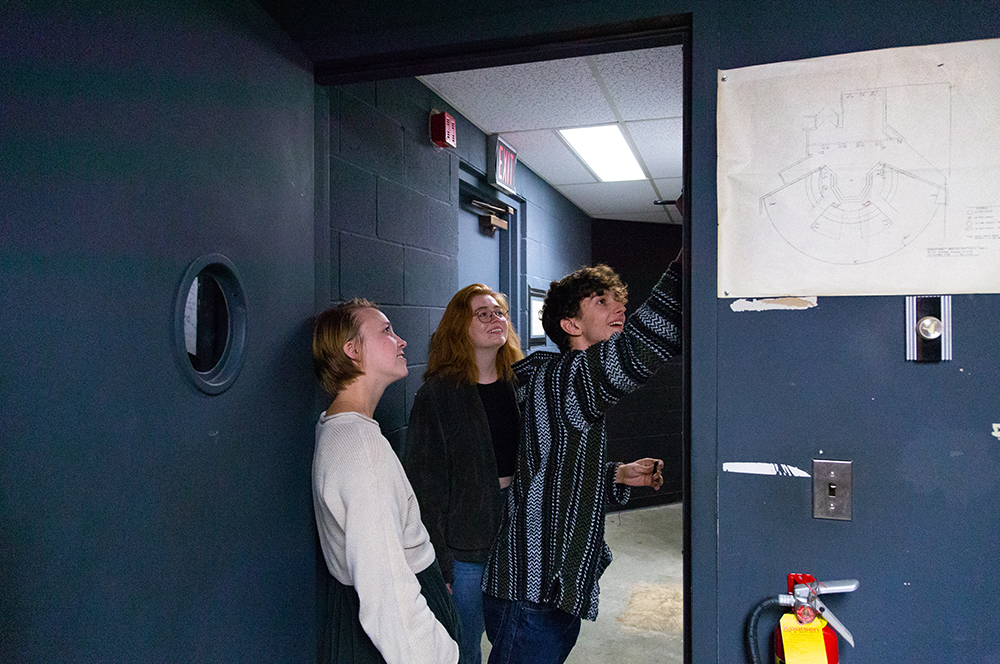 Stevenson (center) watches as sound board operators Kennedy Fraizer ’22 (left) and James DiSandro ’22 (right) sign the wall outside of the control room, part of a long-standing tradition where each crew member writes their name along with the production they are working on. Stevenson writes “The House of Bernarda Alba” underneath her name on the wall. Stevenson takes a moment to chat with Kris Conant, production and box office manager for the Department of Dance, Drama and Film, about 30 minutes before doors open. 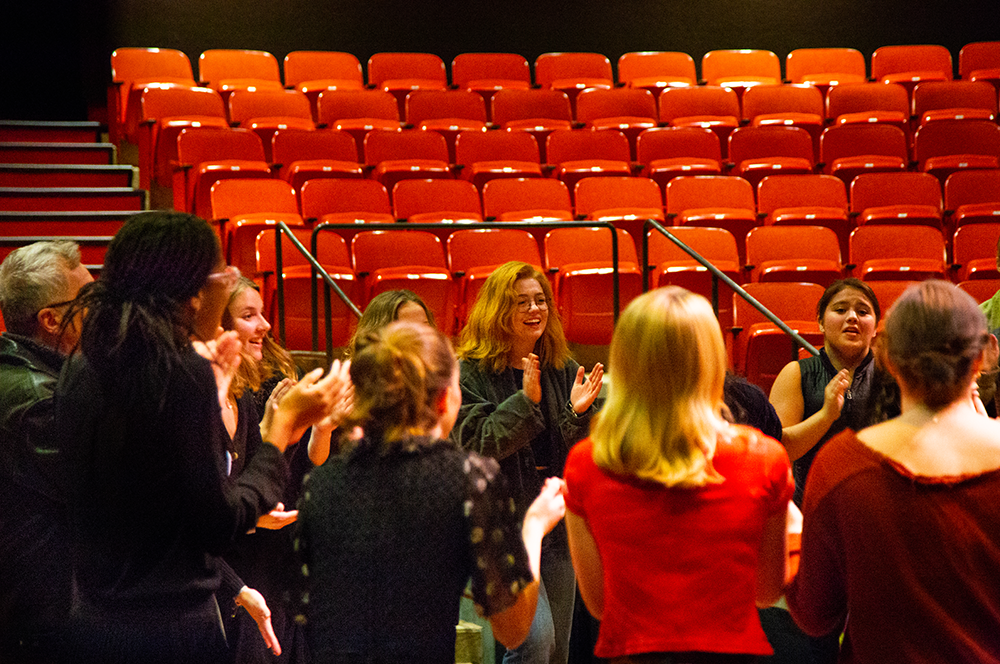 Stevenson (center) does warm-ups along with the cast about 20 minutes before doors open. Vocal warm-ups continue as each actor moves in and out of the circle of dancing, jump-starting the team’s energy and excitement. 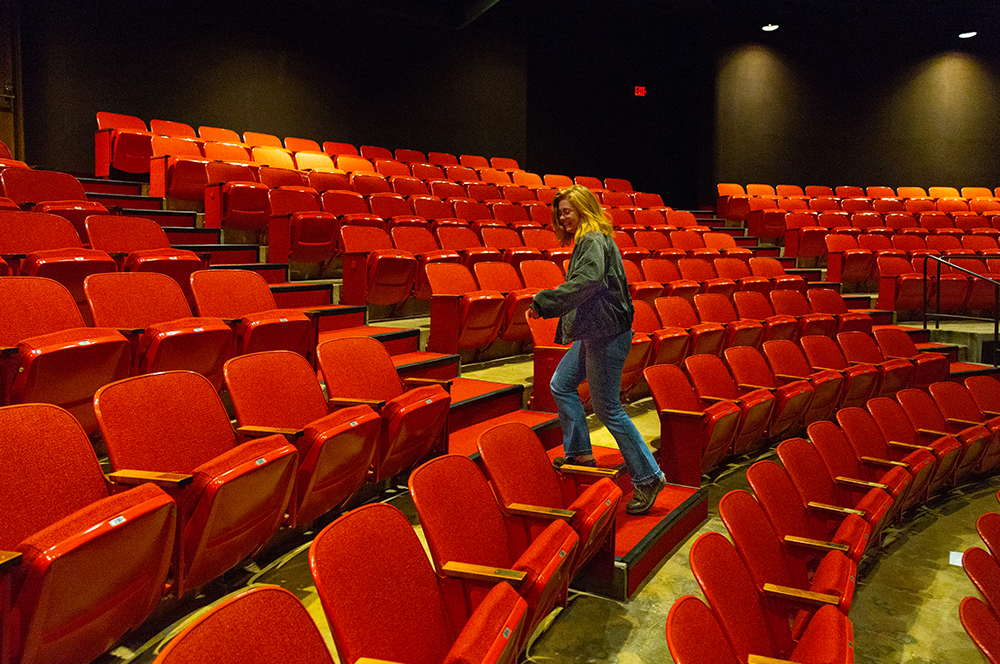 Ten minutes before doors open, Stevenson heads back up to the control room while the actors move backstage for final preparation. In “The House of Bernarda Alba,” five sisters live within the walls of an oppressive house in a Spanish village, denying their hopes and desires in order to remain obedient to their tyrannical mother. Federico García Lorca completed the play in 1936, shortly before he was murdered at the hands of fascist forces in Spain.