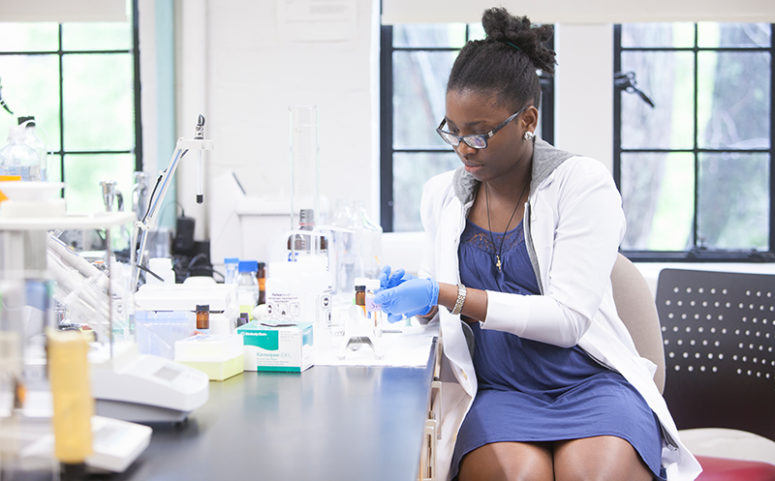 Each summer, the science laboratories at Kenyon are open to talented students who have competed to participate in the Summer Science Scholars Program. Through this program, which offers a fellowship award of $3,500 plus free housing and funds for materials, Scholars enjoy extraordinary opportunities to pursue original research.

Working closely with faculty members, these students spend their summers learning a range of laboratory and field research techniques and honing their writing skills. This hands-on preparation is a key reason that Kenyon graduates are so successful when they apply to medical schools, Ph.D. programs, research institutes and science-related firms.

For neuroscience major Olubusola Olukoya '15, from Lagos, Nigeria, the summer program provides freedom from the time constraints of the academic year so she can focus completely on her research. Olukoya spends the school year combining lab work with pursuit of her interdisciplinary neuroscience curriculum, mentoring first-year students, guiding tours, staffing alumni events and participating in spiritual life.

In past years, Olukoya has assisted Professor of Neuroscience Hewlet McFarlane during the Summer Kenyon Academic Program for inner-city high-school students. His research program explored links between brain chemistry and behavior, including an emphasis on autism – a subject in which Olukoya has been interested since high school.

As a Summer Science Scholar, she will work on another project relating to autism in which she tests whether the effectiveness of a compound known to reduce repetitive behaviors in mice is influenced by its effect on dopamine levels in the brain. These mice function as a model for autism because they have behavioral characteristics that match cardinal traits of the disorder.

“We hypothesize that the repetitive behavior we see in our mouse model is a compensatory behavior driven by the low dopamine levels in their brains,” Olukoya said. Dopamine is a neurotransmitter, a chemical messenger between nerve cells that affects the brain’s reward system and motor function as well as other systems. Part of the experimentation will involve administering drugs that block dopamine to see if the loss of that chemical in the brain alters the beneficial effects of the drug.

Olukoya says she plans to work as a researcher for at least two years after graduation before she applies to medical schools. Meanwhile, she will make immediate use of study findings from this summer in her Honors Program thesis. And when she moves on to her next professional or academic phase, she expects her research background to serve as evidence of her many scholarly strengths.

“It will be helpful to have research experience that demonstrates that I’m competent in independent thinking, that shows creativity and dedication to a cause,” she said. “I’m thankful the research we’re doing has implications for the behavioral component of autism treatment.”

McFarlane said the summer program should be an excellent pathway for Olukoya’s post graduation plans. “What’s great about the Summer Science Scholars Program is the students work with you in your program so they have to acquire what skills you have. They leave with very sophisticated laboratory, writing, and research skills. That makes them very competitive,” McFarlane said.

The 2014 Summer Science Scholars are:

Sarah Frantz '15. Modeling the effect of size on gut function

Issam Hamdallah '16. The role of surA, hlpA, degP, and bamA in extreme acid and base resistance in Escherichia coli

Hayley Howard '15. The effect of a heat wave on photosynthesis and respiration on Glycine max (soybean)

Nathaniel Fox '16. A project directed toward the synthesis of 5-Methylcyclopenta[c]pyridine

Katie Hoener '15. Kinetic analysis of CHY4 and CHY5 in the catabolism of valine in Arabidopsis thaliana

Camelia Milnes '15. Investigating a novel and versatile synthesis of the cyclopenta[c]pyridine substructure

Robin Belton '16. Approximating the volume of  a solid of revolution

Elizabeth Greco '15. A study of Brownian motion in planar domains

Olubusola Olukoya '15. The role of striatal dopamine levels on the frequency of repetitive self-grooming behavior in the BTBR T+tf/J mouse model for autism.

Theresa Chmiel '17. Epi-fluorescent confocal microscopy for use in the imaging and study of giant lipid bilayer vesicles

Sarah Liegner '15. The relationship between stress and aggression