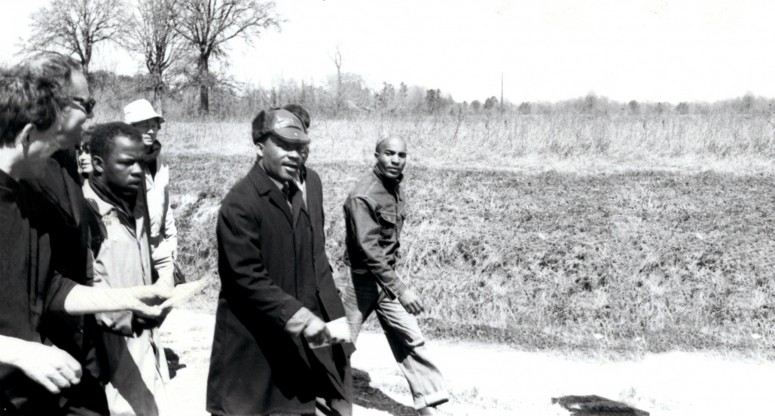 Student photo from the Kenyon Collegian

Student photo from the Kenyon Collegian

Three students—Walter R. Butler ’68, Breece McKinney ’68 and Stuart Revo ’68—were driving back from Daytona Beach, Fla., when they decided to stop in Montgomery to watch the last leg of the 50-mile march. They were joined by John Allerdice ’67 and Nathan Levin, who traveled from Gambier, Ohio, to support the cause.

Butler, an English major from Louisville, Ky., remembers his determination to see King. “I wanted to be up front where King was. I didn’t want to walk in the back,” he said. “So, I got out my camera and walked to the front of the line where there was a swarm of people in front of King, press people from all over the world. If you wanted to take a picture of King, you had to get in a line.”

After Butler filled a roll of film with photos of King, he went to a drugstore in Selma on the way home to purchase more. “It was very clear that they didn’t want to sell me any film,” he said. “They thought I was one of those agitator types.” He was surprised to see that the stool seats at the lunch counter all had been removed so that no one could sit down. “The civil rights act only had been passed the summer before. It hadn’t been in effect for even a year yet,” he added.

When Butler returned to campus, he recounted his experience in the Kenyon Collegian, writing that he participated in the march “with no other thought in mind but seeing the illustrious Dr. King and his ragged followers on their march to the capitol.” In the article, he described King as “wearing a heavy overcoat and a green cap with fuzzy brown earmuffs.”

Looking back on the event, Butler recalls the march being well executed in spite of the unusually cold and bleak weather, which took its toll on the weary marchers. He wrote, “Occasionally, a voice would call out ‘(What do) we want?’ The panting throng would somehow manage to reply ‘freedom!’ Someone else cried again: ‘When do we want it?’ Somewhat fewer cheered ‘now!’ The last movement of the three-part cheer faded into the huffing and puffing of walking up the hill.”

Butler’s classmates, Allerdice and Levin, reported in the Collegian that they were inspired by what they witnessed in Montgomery. “We had marched with the king,” they wrote. “He asked his people to bear with him as he explained why things were so. He spoke as a scholar of history. He spoke to the poor white. He talked of revolution. He talked of love. Once again he told us of a dream when judgment would roll down as waters and righteousness as a mighty stream.”