On Friday, Jan. 20, more than 160 students and other members of the Kenyon community will pile onto three buses and settle in for an overnight road trip from Gambier to Washington, D.C., making their way to what is being called one of the biggest political protests in American history: the Women’s March on Washington.

Some will wear hand-knitted pink “pussyhats” to keep warm. Others will carry witty, colorful posters. But for the students participating in this event, which is expected to draw a crowd of around 200,000 protesters to the nation’s capital on Jan. 21, the most important thing is simply showing up. And they have Emily Carter ’17, an English major from New York City, to thank for helping them get there.

When Carter first heard about the national event, which takes place the day after the inauguration of President-elect Donald J. Trump, she knew she wanted to participate. Carter said that while she appreciated the support she felt throughout the 2016 election, as a member of the Kenyon community, news of the Women’s March inspired her to try and “take that community outside and see what we can do beyond our campus,” she said.

She sent an email to Kenyon’s all-student listserv to gauge interest in a bus trip to D.C., and the response, she said, was overwhelming. “I was expecting maybe 10 or so people to sign up,” she said. Instead, more than 200 expressed interest in attending. “It made me realize how much of a need this was,” she said. “I felt like I needed to do something, and this seemed like a great culmination of my time at Kenyon, which has been so focused on community and collectivity.”

According to an official Women’s March press release, the purpose of the event — which is open to people of all genders — is to “send a message to all levels of government, including but not limited to the incoming Presidential administration, that we stand together in solidarity and we expect elected leaders to act to protect the rights of women, their families and their communities.”

The message has resonated not only with students but with the greater Kenyon community as well.

“I'm so blown away by how far-reaching the Kenyon network has been,” Carter said. Parents, alumni, family members, professors and fellow students, like Emma Welsh-Huggins ’17, have offered Carter assistance in planning the trip, from providing food for the journey to offering the use of board rooms, offices and churches for the students to organize before the march.

For a number of students, the march represents their first foray into political activism. Cameron Messinides ’19, an American studies major from Camden, South Carolina, said he has never been a part of anything like this, but he considers the march an important opportunity to show solidarity with “the women in my life who matter to me, who have affected me and taught me. It’s just a general feeling of responsibility to family and friends, that I should be out there standing with them and for them in something like this.”

Messinides admitted that until recently, he had been somewhat complacent, politically. The result of the 2016 presidential election caught him by surprise, though, and moved him to action. “I’m excited to get politically active in something like this,” he said. “I’m hoping to jump in head first and see other people engaging in activism, to try and weed out that complacency and move past it.”

When Kalki Aseged ’17, a neuroscience major from Blacklick, Ohio, first read about the march online, she never considered attending because she didn’t have a way of getting to D.C. Immediately after reading Carter’s email, however, she signed up for the bus trip.

“During this past election season, and frankly long before then, there has been a lot of discussion about what a woman can or cannot do,” she said.

“I think that this march will give voice to a lot of frustrations that women in this country have felt in the past few years, particularly when it comes to the way we are discussed in the mass media, the levels of female representation in male-dominated work fields and our reproductive rights. As someone with fairly little influence in the decisions made in D.C., I feel like this trip will be a great opportunity for me to join a force that will hopefully make an impact, even if small, to the way women are treated in this country in the future.”

Carter’s hope for the event is that it facilitates community learning and understanding. “This election has brought up a lot of different emotions for different people. That we can all be at the same place with all of those emotions, I think, is going to be the most powerful thing,” she said. “Hopefully, the conversations that follow will create healing and change in different ways.” Photos From the Women's March on Washington 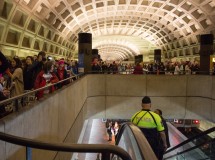 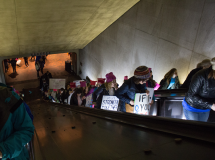 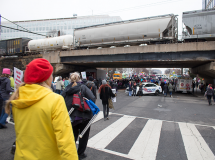