As a final step in the move toward graduation, senior studio art majors display their work at Gund Gallery. “To be able to show your work and to be able to put it in a real gallery space is really exciting,” said Amber Kraus ’15 of New York City.

The senior exhibits take place in two sessions, one beginning Thursday, March 18, and the other Wednesday, April 1.

Kraus, whose work will be shown in the first session, has been pondering her senior project for months, trying to tie together studio art and art history — her other major — with her environmental studies concentration. Her exhibit, called “Portraits of Waste,” features four paintings made by tracing the shadows of sculptures she created from reclaimed materials. “I think when people see them on the canvas, there’s this dichotomy between the form being very intriguing and interesting and the title: why it’s waste material. I wanted to encourage the viewer to think about where the raw material is coming from and why it is cast off.”

Associate Professor of Art Read Baldwin ’84 said studio art majors put a lot of time into deciding on their final exhibit. “From the minute a student declares in studio art, their imagination begins to sparkle with the possibilities that lie ahead,” he said.

Claire Popovich ’15 from Kensington, Maryland, who is majoring in anthropology in addition to studio art, also went through a process in deciding on her final project, moving from two-dimensional abstractions to three-dimensional sculptures. She cuts line drawings from large photographs of road trips she has taken, then pins them to the wall and casts them in a harsh light so only bits of the actual photographs are discernable. “I tried to capture the disorienting nature of anxiety and how it kind of separates you from reality,” she said.

Being able to share her work during the senior exhibit is particularly gratifying, said Popovich, whose work will be featured in the first session. “It’s exciting because I get to engage with the community and show them my art. It’s such a great opportunity to understand how a gallery works.”

“We always enjoy the opportunity to mentor senior studio art majors as they are developing their final projects,” said Gund Gallery Director Natalie Marsh. In the future, Marsh said the gallery looks forward to including professional practice workshops and an end-of-year group exhibition of senior work during the final week of classes through commencement to extend the celebration of students’ achievements beyond the immediate Kenyon community to the many families who come for graduation.

“I’ve seen hundreds of senior art exhibitions, and I’m really impressed with the range of the work being created by Kenyon’s senior art majors,” said Christopher Yates, assistant director of the Gund Gallery. Yates is a freelance art critic who came to Kenyon after 16 years at Columbus College of Art & Design. “They clearly have diverse and fulfilling professional lives ahead of them.”

For some students, the senior exhibit represents what may be a one-time experience. Kraus, for example, has accepted a job after graduation in the sustainability department of a real estate company in New York. “For myself, someone who is going into a slightly different field and incorporating the arts in a slightly different way, I don’t really know when the next time is I might be in a show,” she said. “This is really exciting.”

Baldwin says the show both recognizes the achievements of the college experience, while preparing students for the future — whatever direction they take. “Exhibiting is the culmination of their artistic experience at Kenyon, and a true capstone on their academic journey,” said Baldwin. “The senior exhibits are an immersive experiential endeavor that prepares art majors for the professional rigors that lie ahead.” 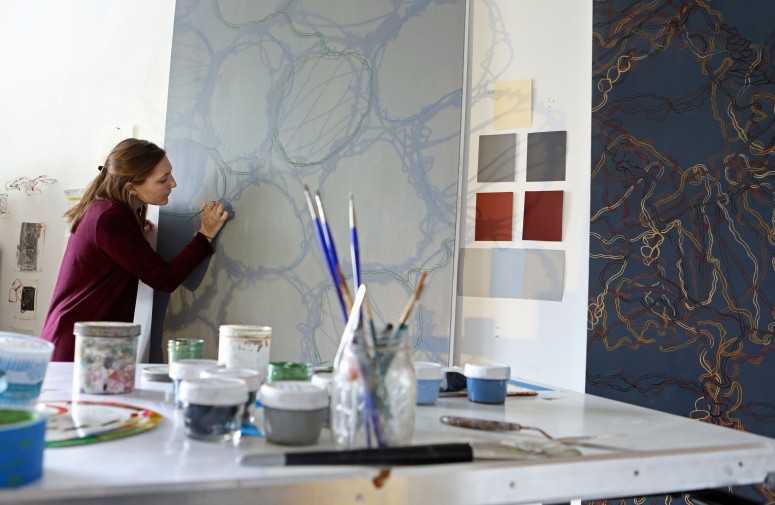 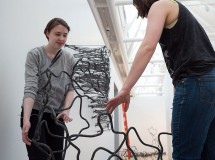 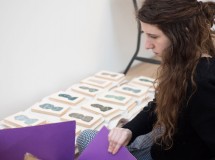 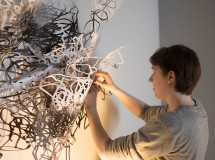