The three-year Middle Path restoration project enters its second phase in May in the heart of the campus, from just south of the Middle Path gates to the doorstep of Old Kenyon.

The restoration is intended to improve universal access and reduce maintenance costs while preserving the look, feel and sound of the path. The project brings to the path a 10-inch, gravel-base layer under a 4-inch seam of stabilized granite gravel with a loose-gravel surface. A semi-permeable bonding agent is used to stabilize the gravel.

Environmental Management, Inc., headquartered in Plain City, Ohio, will begin this phase of the project May 26, after planting 49 trees along the portion of the path that was restored last year between Brooklyn Street and Bexley Hall. Trees that had lined that north section of the path were removed because they were under stress, damaged and ailing.

At least one tree along the south section of the path — at the northwest corner of the intersection of Middle Path and the walkway between Hanna and Leonard residence halls — will be removed during the next phase of the project. “It’s obviously suffering,” Steve Arnett, director of facility operations, said.

Four new trees, all sugar maples, will be planted. The College now counts 98 trees along the path in the new construction area.

An assessment of tree health along Middle Path performed in 2012 by Michael Van Valkenburgh Associates Landscape Architects of Cambridge, Massachusetts, found that virtually all of the stately trees in the South Campus area directed their roots away from the hard-packed path. Every effort will be made to protect root systems. “The only way I can see us having to cut other ones down is if we’re excavating and we run into a main root system that we didn’t know was there,” Arnett said. A tree with a damaged root system could threaten the life of the tree and become a safety hazard.

Some trees along the path will undergo pruning. “People will see us near the other trees,” Arnett said, “just to get the dead wood out of them and shape them up a little bit.”

The restoration work is expected to take 10 weeks, concluding at the end of July. As work progresses, beginning just south of the gates, wooden bridges will be built as east/west overpasses at four points. The finished path will require about three weeks to cure before foot traffic is allowed, Arnett said.

Arnett is pleased with the performance of the north section of the path now under traffic since last summer. The gravel has held, he said, and drainage has improved.

Vehicle traffic on the restored path is limited to 1,700 pounds, which means no cars or trucks with the exception of emergency vehicles.

Problems with universal accessibility and maintenance triggered interest in the restoration of Middle Path, which was established in 1842 from Old Kenyon to Wiggin Street and extended to Bexley Hall in 1860. The Kenyon College Board of Trustees approved the Middle Path restoration that was proposed by the College Operating Division. The project was recommended in the landscape master plan prepared by Michael Van Valkenburgh Associates. The firm was hired by the Buildings and Grounds Committee of the board of trustees, and the consultants worked with a Kenyon steering committee that includes 13 people representing the administration, alumni, faculty, staff and the village of Gambier. The Gambier Village Council approved the project.

The third phase of the restoration project, including the gates and moving north to Brooklyn Street, is planned for 2016.

Enlarged views of renderings of the project are available view 1, view 2 and view 3. 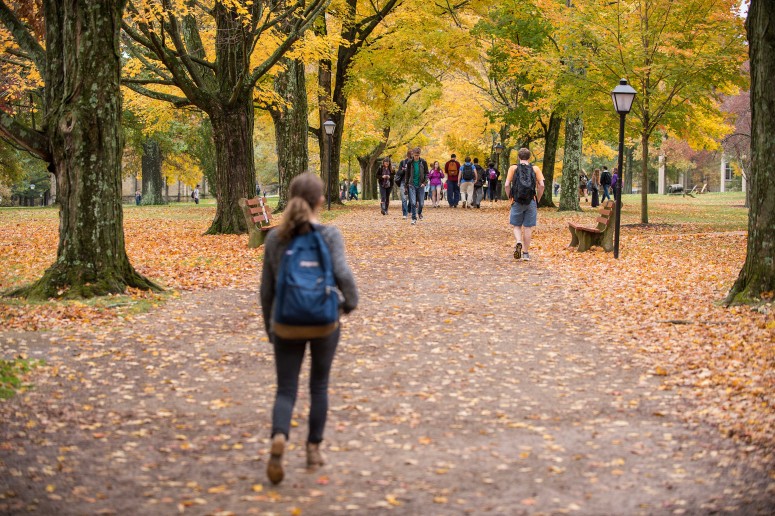 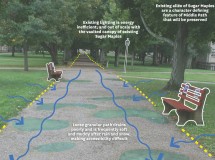