Kenyon will publicly christen its new solar power installation on the roof of the Village Inn restaurant on Monday, May 1, at 2 p.m. The new photovoltaic panels will power the three apartments above the restaurant and are projected to offset 80 percent of the residents' power usage.

Eric Holdener, assistant professor of physics and scientific computing, and students in his “Solar Power Systems: Science, Policy and Practicum” class facilitated this undertaking along with Jerry Kelly ’96. Holdener and Kelly team-teach the course, which is gives students insight into solar power generation and the solar industry while also benefiting the College with renewable energy sources.

This is the team’s second installation of solar energy systems at Kenyon. Holdener and Kelly first worked with students to install solar panels in fall 2015 at the Kenyon Farm. They began team-teaching their course as a special topic in January 2016, and it is now offered once every academic year.

Kelly has worked in the solar industry since 2010. He worked at Third Sun Solar for four years, and the company has also been involved in the installations. “Our students evaluated five campus sites for solar last year, and the College selected the VI as our next project,” Kelly said. “This semester's students are evaluating sites for next year's project — perhaps the new Village Market building, or the bookstore roof.” The installation at the Village Inn cost $34,000.

The ultimate goal is for students in the course to install about a dozen solar energy systems over the next five to eight years, ushering in a new generation of clean energy for the College. “Our students will be prepared with in-depth knowledge and experience to compete well for solar industry jobs, should they choose to start their careers there,” Kelly said. 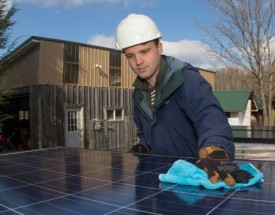 Alumni, faculty and students collaborate to install solar panels at the Kenyon Farm.

More about solar panels at the Kenyon Farm
Join our path forward.
Give To Kenyon
Loading