Schools in a small town in Belize received new solar panels thanks to the work of eight students and two professors who spent their spring break in the Central American country. Due to a lack of resources, electricity costs in Belize are four to five times higher than in the U.S.

To save cash-strapped, rural schools hundreds of dollars per year in utility costs, the students affixed solar panels weighing 50 pounds each to the metal rooftops of one- and two-story buildings. According to Nora Boles ’20 of Arlington, Virginia, the children at the schools asked them to come to their homes, too. “They said, ‘Our electric bills are really expensive. We need this. Can you come to our house and do it?’’’

It is a need that James Skon, visiting professor of mathematics and computer science, has been addressing with student groups for 30 years. This is his third trip with Kenyon students, who raised about $2,000 each to make the journey. They were joined by Robert Alexander, visiting professor of economics and environmental studies.

“I care about renewable energy and felt that if I were going to visit a foreign country that I should give back,” Teahelahn Keithrafferty ’19, an American studies major from Racine, Wisconsin, said. “We had quite a bit of interaction with the Belizean people, especially with the schoolkids.”

The students worked at four elementary schools and one preschool. In addition to installing panels, the students presented classroom demonstrations about solar power and replaced old light bulbs with more energy-efficient LEDs.

The project will continue at Kenyon, where students can access live data showing how much power the panels are generating and how much money the schools are saving. “We are attempting to carefully document exactly what the investment is in a solar installation, and then use the data about the energy produced to determine how long it will take to pay off the installation cost, or to reach the point of generating ‘free’ electricity,” Skon said. His longer-term goal is to integrate this project, and the analysis of the data, into courses at Kenyon.

Other students who participated in the trip were Carolina Andrade ’19 of Oklahoma City; Clara Altfeld ’19 of Austin, Texas; Meredith Glover ’20 of Cincinnati; Hannah Hertz ’19 of Davis, California; Erin Keleske ’18 of Racine, Wisconsin; and Caitlin Kennedy ’19 of Montclair, New Jersey. 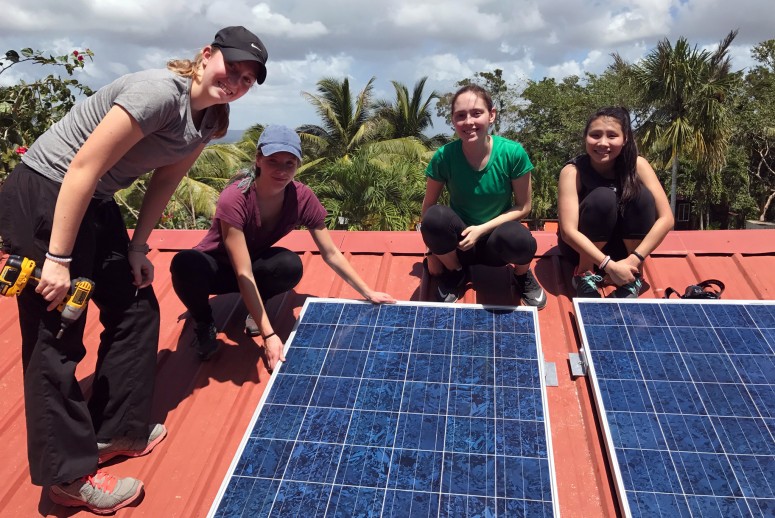