Selected from a pool that spanned all three NCAA divisions, each scholarship winner receives a one-time, nonrenewable grant of $10,000. Each sports season (fall, winter, spring) there are 21 scholarships available for men and 21 for women for use in an accredited graduate program. The scholarships are awarded to student-athletes who excel academically and athletically and who are in their final year of intercollegiate athletics competition.

All three Kenyon recipients were members of the swimming and diving program. With the addition of Orbach-Mandel and Wilson, the Ladies program now has 35 scholarship winners, while the addition of McCoy gives the Lords 33 winners. Since the NCAA began the postgraduate program 55 years ago, 85 Kenyon student-athletes have received scholarships. That total ranks second among all NCAA Division III institutions.

McCoy, who majored in economics and was a 2019 team captain, plans to put his scholarship to work at the University of Georgia School of Law. In the pool, McCoy swam for four seasons and was a three-time NCAA qualifier. He specialized in distance events, as well as the 400-yard individual medley. He won three career NCAA All-America awards and one All-North Coast Athletic Conference (NCAC) honor.

On the women’s side, Orbach-Mandel was a 25-time NCAA All-American who majored in economics. She swam in four straight NCAA Championships and captured three national relay titles over the past two seasons. She was an eight-time conference champion and a 14-time All-NCAC honoree. She was named Kenyon’s 2019 NCAC Scholar-Athlete award winner and was selected as Kenyon’s nominee for the NCAC Pam Smith Woman of the Year Nominee. Additionally, Orbach-Mandel, who plans to study sports business in graduate school after spending two years working in the NCAA’s finance division, was voted to a first-team spot on the Google Cloud 2018-19 Academic All-District VII Women’s At-Large Team.

Wilson also was voted on to the 2018-19 Academic All-District VII Women’s At-Large Team. She studied molecular biology at Kenyon and aims to move on to medical school, after spending a year working at Mount Carmel St. Ann’s hospital in Westerville, Ohio. In the water, Wilson was a 19-time NCAA All-American with two national relay titles. At the conference level, she earned six NCAC event championship titles and was a 16-time All-NCAC honoree. Wilson was one of Kenyon’s Jess Willard Falkenstine Award winners for integrity and leadership and was the winner of the program’s Stephen E. Bennett Memorial Award for devotion to training and competition. 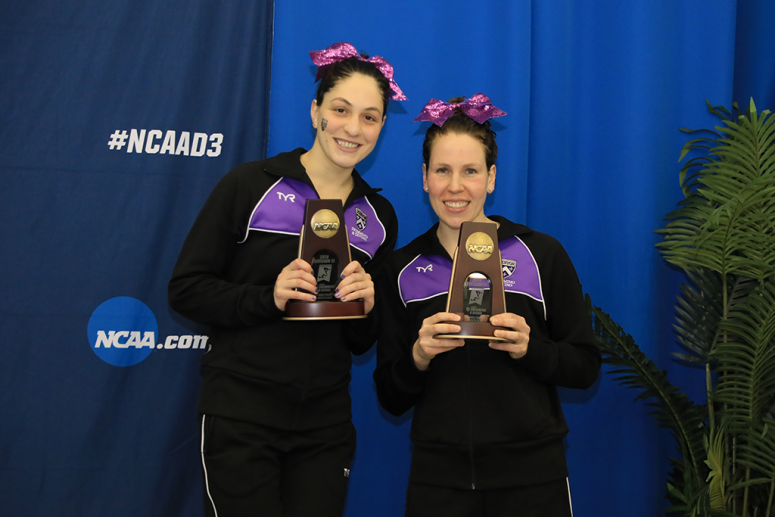 Hannah Orbach-Mandel ’19 and Abby Wilson ’19 at the 2019 NCAA DIII Swimming and Diving Championship.