While the event unavoidably drew comparisons to American electoral politics in 2016, the panel focused on populist phenomena in other countries during the past century. Powers, who is also CSAD’s assistant director, led by discussing two 20th-century authoritarian leaders, Juan Perón of Argentina and Alberto Fujimori of Peru, who both enjoyed popularity before bringing their nations to ruin.

Perón was “coarse and crass in his language, but that was part of his appeal: he was one of us,” Powers said. Along with his musically famous wife, Evita, Perón was a charismatic leader who, while not lower class himself, proved an aspirational figure for the poor and was able to gain power against an establishment considered corrupt and elite.

In Fujimori’s case, Powers claimed Peruvians “stopped caring a lot about democracy” and sought a leader who would protect against the dangers of economic crisis, terrorism and hyperinflation. Powers concluded that democracies face trouble when people feel left out from the democratic process, and that authoritarians can arise even if they don’t present coherent policy ideas.

Camerra-Rowe, who focuses on comparative politics and European politics, recently returned from a sabbatical in Denmark, where she said many Danes would inquire about the popularity of Donald Trump in the U.S. Camerra-Rowe noted that populism is not merely an American phenomenon, as it has enjoyed a resurgence in Europe, with the strengthening of right-wing parties in Denmark, France, Germany, Scandinavia and Sweden.

Although these parties differ across nations, Camerra-Rowe identified several factors common in their rise, including a loosening of voter attachments to centrist parties, increasing economic insecurity and concerns over immigration and national identity. “I don’t think the populist right-wing parties are a fleeting development in Europe,” Camerra-Rowe said, predicting that parties in several nations, particularly France, could gain strength and even assume power following upcoming elections.

Villegas approached the topic of populism from a theoretical perspective, explaining the division of society into “civil” and “anticivil” factions. The sociologist examined the concept of “the people” as it applied to movements in the Philippines, Venezuela and Ecuador, and pointed to weak electoral rules and presidential (as opposed to parliamentary) systems as contributing factors to authoritarian control.

“There are cultural dimensions to populism,” Villegas said. For example, former Venezuelan president Hugo Chavez would appear on television, bonding with civilians and decreeing legislation. As part of the “performance of populism,” politicians would often merge right- and left-wing discontentment.

During the question-and-answer portion of the panel, the panelists discussed how Trump compares in the realm of populists throughout history.

“Whereas classic populists are giving voice to new identities, he’s appealing to old ones that feel unheard,” she added.

Professors Camerra-Rowe and Powers will continue their discussion on politics and democracy during CSAD’s “From Hill to Hill” event Oct. 6-8. For more information, visit CSAD online. 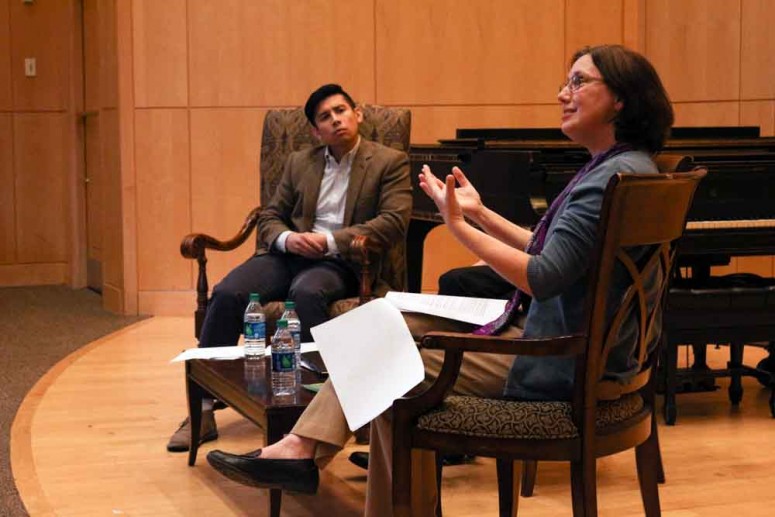