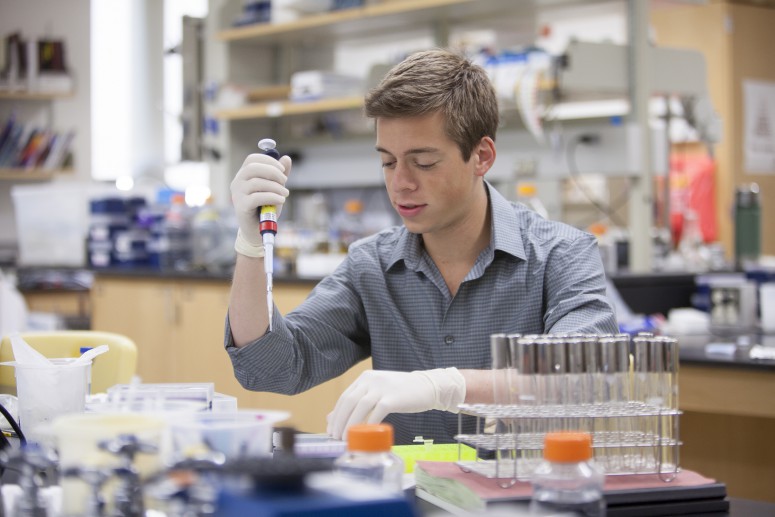 At Kenyon, science isn’t just something you “take.” It’s something you “do,” hands-on, in the lab and field. Kenyon students enjoy extraordinary opportunities to pursue original research. That’s one reason they are so successful when they apply to medical schools, Ph.D. programs, research institutes, and science-related firms.

The most intensive research experiences are reserved for participants in the Summer Science Scholars Program. Scholars spend the summer months on campus, working closely with faculty members. The opportunity is available as early as the summer following your first year at Kenyon.

This year, 42 Summer Science Scholars are conducting research in anthropology, biology, chemistry, psychology, and physics. A fellowship award of $3,500 (plus free housing and funds for materials) supports each student.

Summer started a little early for Eric Engelbrecht, a rising senior from Pleasantville, N.Y., who launched his project a few weeks before the spring semester ended. Engelbrecht, working in the lab of Associate Professor of Biology Wade Powell, expects to devote between two and three months to the growth of multiple populations of mutated clonal frog cell lines. Once he established the lines in the spring, Engelbrecht had a daily duty to shepherd the cells’ growth and use them in experiments.

Powell’s lab focuses on a protein called the Aryl Hydrocarbon Receptor, which binds to such chemicals as dioxins, PCBs, and cigarette smoke components, and influences the biological effects of those contaminants in animals and humans.

“We’re interested in the effect of different kinds of pollution, and particularly dioxin, on frogs, and we’ve done a lot of characterization of the Aryl Hydrocarbon Receptor in the African clawed frog,” Powell says. “One interesting difference between frogs and people is that frogs have two of these receptors, whereas people and mice have only one. We’re interested in what the difference is between those two receptors. Unusually, having a more complicated model may help us dissect away different functions of the single human protein.”

To tease out that difference, Engelbrecht is genetically manipulating frog cells to delete the receptors. The newly created lines will allow the scientists to test the effects of dioxin on cells with and without any of the receptors present, and cells containing just one receptor or the other. He is using a sophisticated genome-editing tool called a TALEN, or transcription activator-like effector nuclease, to create the new cell lines. The approach allows scientists to modify the genome of any organism, disrupting its DNA and, in this case, preventing a targeted gene from making the key receptor.

“The receptors have only 86 percent amino acid identity, which is a significant difference between such closely related proteins,” Engelbrecht says. “That’s one reason we think that the two copies of the receptor in frogs have different functions.”

Powell typically hosts two to three Summer Science Scholars each year. His National Institutes of Health funding covers their stipends, and the students’ work contributes to the steady pace of discoveries that help explain why some species are sensitive to pollutants and others are not.

The team effort is as important for Powell, who describes himself as the “head coach” of the lab, as it is for students who are exposed to research opportunities rarely available to undergraduates. “Having that period of full-time work in the summer enables students to really participate in science on the professional level – not just in the laboratory, but in the realm of meetings and publications, and developing colleagues and contacts outside of Kenyon,” he says.

This isn’t Engelbrecht’s first summer of scientific pursuit. He spent the summer of 2012 at the University of Louisville, conducting cancer research. That experience, as well as the science classes he took in his earlier years at Kenyon, changed the course of his college career. Originally attracted to Kenyon for its English Department, Engelbrecht is now a molecular biology major planning a post-graduate life devoted to health-related research.

These are the Summer Science Scholars for 2013:

Rachel Rhee '15, Columbus, Ohio. "The Role of Maillard Reaction Products and Reactive Oxygen Species in the Growth and Survival of Escherichia Coli."

Audrey White '14, New York City. "The Effect of Thermoperiod and Photoperiod on the Phenotype and Thermoregulation of the Harlequin Bug (Murgantia Histrionica)."

Harry Hurley '14, Maplewood, N.J. "A Classic Approach to a Classic Problem: Induction by Chlorine to Increase the Efficacy of Lewis Acid Catalysis and Elucidate the Rate Determining Step."

Grant Jenkins '14, Kirkland, Wash. "A Comparison of Tests for Interaction in a Two-Way Layout with Replication."

Maureen Hirt '14, Bloomington, Ind." In the Mind of an Athlete: A Meta-Analysis of the Influence of Perfectionism and Competitiveness on Athletic Performance."