If one were to ask a Kenyon student a month ago to describe Nate Lotze ’14, it is unlikely they would have said “a folk musician.” Answers such as “English major” or “captain of the baseball team” would be more likely to come up. Lotze kept his passion for music mostly hidden during his time as a student at Kenyon. Now, Lotze has surprised both his peers and former teammates with the release of a five-song EP, entitled Psalms and Shovels. The EP was released on Oct. 5 and is available on platforms such as iTunes and Spotify.

Music is nothing new to Lotze, who began playing guitar and singing in high school and continued writing songs throughout his time at Kenyon. Some of those songs are included on the EP. “[Baseball] was my main priority and my main extracurricular activity,” he said. “So I was just writing these songs on my own and playing them on my own.”

After graduation, when Lotze began working for an environmental non-profit organization in Columbus, he found more time to devote to music. He began performing at open mics around the city, and decided to record and release his EP. Lotze is still performing at open mics, and he has also booked a few shows. “I’m going to try and continue playing as much as I can and try to gain new fans and just see where things take me,” he said.

Although Lotze did not play with any other Kenyon musicians during his time as a student, he says he wishes he had. He is open to working with other groups as his music progresses. “I’m looking to hopefully collaborate in the future with more people, to add more instruments to the mix and create a more complex sound,” he said.

Right now, Lotze’s sound is simple: just guitar and vocals. His music is in keeping with folk and Americana traditions, and he cites Bob Dylan, Woody Guthrie and more contemporary folk artists Joe Pug and Josh Ritter as influences. The slow tempo of the music gives the listener a chance to appreciate the carefully crafted lyrics, such as, “It’s not the thoughts themselves that will kill you; it’s the way they spin around,” from his song “In the Heartland Now.” Lotze sings in a low, but gentle voice, with a bit of a rasp and a hush to it. It evokes the same feelings of longing and nostalgia that he sings about. Tanner Zaas ’15, one of Lotze’s former baseball teammates, described the theme of his lyrics as “subtle memories, things you don’t appreciate at the time. But looking back, they mean something to you.”

Zaas and Lotze’s other friends who knew about his music were not surprised when he released the EP. “That’s Nate,” Zaas said. “He finds something he really likes and then he gets really good at it and he puts all his energy into it.”

Lotze would love to become a full-time musician one day, but for now, he is just seeing where his passion takes him. “I would love to be able to play music for a living and support myself that way,” he said. “Although that’s not the be-all end-all. I love playing music and writing songs, so I just want to continue to do that as much as possible.” 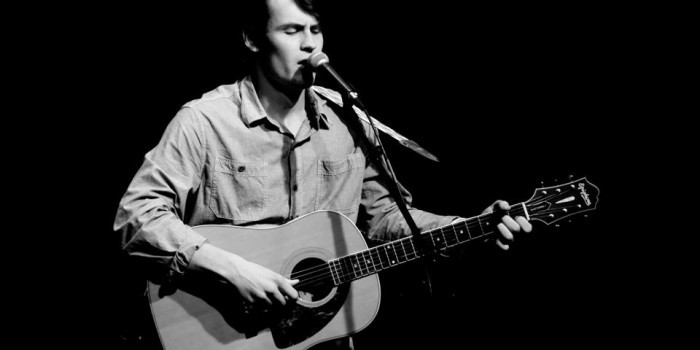 Photo courtesy of the Kenyon Collegian

by Anna Dunlavey '15, the Kenyon Collegian