Taking a page from "Miss Peregrine’s Home for Peculiar Children," the best-selling young-adult novel by Ransom Riggs '01 that was adapted to a blockbuster film, we searched Kenyon’s archives to find the College's most peculiar, unidentified photos.

We then asked for your help in describing, in 150 words or less, what was happening in each image, and received more than 500 stories from 284 alumni, students and prospective students. Ranging from hauntingly eerie to flat-out frightening, here are the winning stories that quickened our pulses and left us wanting to read more.

First-place winners are receiving a signed copy of Riggs' latest work, "Tales of the Peculiar." Entries were judged by the Office of Communications and College Historian and Keeper of Kenyoniana Tom Stamp '73. 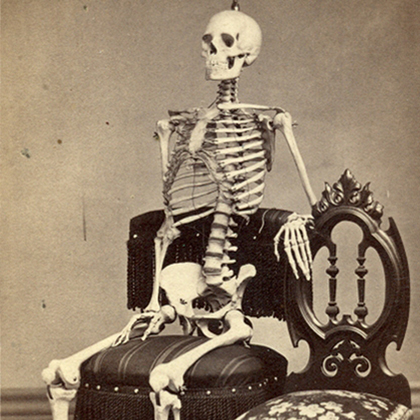 “Tell me,” said Professor Timothy J. Courtman, “how did this man die?”
His group of students observed the skeleton which was casually sitting down, and fidgeted.
Eventually one brave young man suggested, “Perhaps he was shot in the head?”
“Wrong!” Courtman shouted. “There would have been an indentation from the bullet penetrating the skull.”
The young man stepped back, embarrassed.
Then the hand of a young girl came up. Courtman barely saw her, she was so small compared to the others. He didn’t think she would have the right answer, but it was best to amuse her.
“Poison,” said the girl definitively. “He was sitting at the dinner table, and someone poisoned his meal before serving it to him. He hasn’t moved since.”
The serial murderer Courtman — though one must understand that this name was only an alias — smiled. Here was someone he could work with during his next killing.

She left him on a rainy day in mid October when the leaves were slowly catching fire with red and orange pigments. Fall turned to a biting, lonely winter, and he waited. Fifty falls came and went until his skin withered like the leaves on the trees and his breath lost its warmth with the winter breeze. He waited until his body gave in to the changing seasons and putrefied. All that was left of him were the bones that used to ache with the approaching cold, waiting for the warmth of his lover to return to his side. Eventually, he could not miss her for he had lost his heart, and he found comfort in this, for he had finally found some respite from the pain she had caused him. He found his peace sitting next to her eternally empty chair. 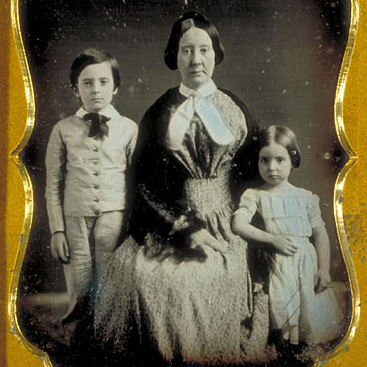 It’s not that she was wholly unwell, my mother. She just had her own ways of seeing, never mind if no one else could see the same. Take this photo, for example. We dressed in our best: my stiff jacket, Mother’s beaded bonnet. But not even then, while we stood there, waiting for the photographer to compose his image, could she refuse to indulge – for in her mind, in her lap, was her cat. It had died - years ago, in fact, when she was a girl herself. But my mother insisted she still felt him brush against her ankles, leap into her lap. This photo is one reminder among many, her arm gently crooked over the negative space of his body. A child can get used to many things, and I forgave her this idiosyncrasy. However, my dear sister, a mimic from the beginning, did not fare so well.

"Mummy, can I move yet?" Harold mumbled keeping his posture stiff and his mouth straight as he possibly could. "I really want to go play in the stables."
"Not yet," his mother replied firmly, through closed lips as well. "Not until we get our photograph taken. You don't want to ruin the photograph, do you dear."
"No mummy. But-" Harold complain, moving his head slightly towards his mother.
"Stay still Harold! Stop talking and stay still like your sister Alice."
Harold glanced at his sister, who hadn't moved since they took their places. He promptly sighed and held his pose for a few more moments, before he grew antsy again.
But before he could act, or complain, a bright light flashed, and Harold nor his family could move forevermore.

The Kenyon baseball league was coming together for their group photo on the Sunday after their big win. The group, a strapping collection of jubilant victors, posed for their picture immortalizing them in their sportive spirit. The boy in the foreground, known only as Sam, once belonged to that very baseball team. He was the star pitcher, lined up to play professionally, until one October night. It was the bottom of the ninth, and Sam was preparing for a 9 to nothing win. He threw the best ball of his life, but the batter hit it just the right way to send it rocketing towards poor Sam's head. The ball hit him square in the left eye, and he died from head trauma that day. Nevertheless, Sam still wanted to sit in the team photo, much to the surprise of the boys when the picture later developed.

The sick thud of metal echoes in his mind, bringing back vivid memories of times he would rather forget. The harsh pant of exhaled anger into a biting winter air, the spattering of scarlet blood onto crisp, freshly-fallen snow. He straightens his tie and tries not to look at the boy and the metal bat next to him. No one but the two of them would ever know. The eleventh member of the team used to be a physics major. He used to date a girl named Cynthia. He used to be alive. Frustrated, the boy drags his attention back to the present. He sets his square jaw and his gaze on the camera. His tie feels suffocating, as if there were a dead man’s chokehold around his throat. If he imagines hard enough, it could be his hands bruising his collar. He needs a drink after this is over. They were just lying innocently in an ancient trunk in my attic; a plain white blanket and a dainty pair of pointed heels. When I unfolded the blanket, a picture fell out. It swirled through the dusty air and landed softly the floor, illuminated by a solitary shaft of sunlight.
A scream caught in my throat as the girl’s haunted, empty eyes bored into me. Quickly, I flipped the picture over - I never wanted to see that face again.
On the back of the photo, there were several lines of old-fashioned writing. Squinting to decipher the faded script, I saw that the snapshot was dated some two hundred years previously. The caption read, “Lizzie wearing her favorite shoes. Westbury Asylum, May 1849.”
When I turned around, she was floating in front of me, her eyes wide and her mouth set in a deranged smile.
“I want my shoes back.”

They called her witch-girl. Lyddie called them boring.
“Honestly,” she said to me, leaning against one of her trees. “I would have hoped society had moved on since Salem. Or at least found more creative insults.”
I smiled at her. It was strained. I couldn’t understand why she didn’t fear their fear.
“What can they do? Kill me? Not likely.”
But she had to know that there were a thousand tortures to be found just in the skeptical lift of an eyebrow. They could have destroyed her without saying a word, and they said plenty.
“Sticks and stones, darling.”
Was she—was she proud, then? Of being different enough to merit their hatred?
She looked up at me then, a sweet, sly smile on her lips. The whites of her eyes nearly swallowed up her irises, and I was suddenly, horribly, afraid of her too. There was always something odd about them, even if we couldn't completely name it back then. Something not quite right about the way they spoke, or smiled, or ate their sandwiches.
We were children and they were different.
They were identical, like clones, but we were never quite sure if they were septuplets or not. I don’t even think Miss Breckenridge knew, because they didn't have parents to inform her of their reading levels, even though she already knew the obvious: all illiterate.
We mocked them constantly for it. How cruel we were, almost deserving what they did to us. Almost.
Of course, no one could ever be certain it was of their doing, but I swear I heard all seven chanting, over and over and over, and laughing, as the flames devoured the rest of us in the schoolhouse.
But we were just children.
And they were something else.

A rare studio portrait of the Gambier Ethereals, whose 1888 Charter established it as "a society of gentle folk dedicated to the appreciation and promotion of the virtues of the fairer sex." It was not until late 1892 that the society was roiled by the discovery of the irregular membership of Carl Schmort, a Danville chicken farmer, here pictured top row, second from left. Despite vigorous protests and increasingly creative interpretations, the bylaws of the Charter did not yield grounds for the exclusion of Mr. Schmort from membership; later and more direct efforts to do so eventually led to Mr. Schmort's recourse to legal remedy, culminating in the influential decision of the United States Supreme Court in Schmort v. Ethereals (1894), which established an important precedent in the interpretation of the term "fair" under the 14th Amendment to the United States Constitution. Spectacles, feathers, tablecloths, and tea.
I smiled faintly at the perfect set up. A perfect day, perfect picture.
“Would you like some tea?” I would ask them, and being the kind men they were, they would say yes. One of them had brought his camera, claiming that this would be a party no one would ever forget. Oh, how right he was. I was in charge of the drinks, just as I always was.
“Would you like some tea?” The question was asked and answered with thirsty nods and fine sipping. Quickly, nods turned into convulsions and writhing; sipping turned into gasping and choking. Their eyes widened and their hands clawed at the beautiful tablecloth. Glass shattered, and I watched as the camera lay in the middle of the storm.
Another perfect picture. Still a beautiful day. Such a perfect murder.
Corpses, blood, cyanide, and me.

The table of horrors is not just any table. It lures people to it like bears to honey. This is what happened to Mary Thonger. She was walking in the forest one, when she came across a beautiful table; polished wood, frilled tablecloth, elegant chairs. She just couldn't resist eating some of the delicious food that was upon it. She put a grapefruit into her mouth, and gagged. It was horrid! And then she saw the table for what it really was: A crumbling slab with rotten food and no chairs. Mary tried to leave, but couldn't. You see, this is the curse of the table: Once you eat from it, you see it for what it really is. But you cannot leave, either. The table keeps you there. And so Mary stayed there for the rest of her life, forcing the rotten food down her throat, unable to resist. Master of the Peculiar

More about Ransom Riggs '01.
Join our path forward.
Give To Kenyon
Loading