Best-selling author Ransom Riggs '01 visited campus Tuesday, April 1, to talk about his life, work and time as a student at Kenyon. Hollow City, the sequel to best-seller Miss Peregrine’s Home for Peculiar Children, was released in January of this year. Riggs expects the final installment in the trilogy to come out in the summer of 2015. The Collegian sat down with Riggs for a chat.

Kenyon Collegian: When and how did you know you wanted to write?

Ransom Riggs: I was writing from the time I was a little kid. … I was obsessed with C. S. Lewis and The Chronicles of Narnia, mysteries for kids and stuff … until about the eighth grade when I discovered movies and fell totally, hardcore in love with movies and decided that’s what I wanted to do for a living. … "I’m going to go to a liberal arts school and read a lot of books and then I’m going to go to film school and then I’m going to be a famous movie director." That all happened except for the famous movie director part — they don’t really tell you in film that it’s not a real job. Have a solid plan B. During film school, I was sort of helping pay my way through film school by writing. … The blogging work mutated into a chance to write a book for an independent publisher. … Then I had a sort of open door to a publisher who liked me.

KC: The idea for that book, Miss Peregrine’s Home for Peculiar Children, came from a collection of interesting pictures. Where did you find the pictures and how did you go from there?

RR: A flea market. Los Angeles has a lot of junk for sale. I’ve always loved photography. I took photography [at Kenyon] and I couldn’t afford to collect photography by known photographers. It didn’t really occur to me to do anything with them, but then it started to creep up on me. This idea that maybe I could do something with these. I turned them into two different books, Talking Pictures and then Miss Peregrine's. It was great because they were sort of lost, orphaned photographs.

KC: Did you plan to always write for the young adult audience?

RR: I didn’t mean to. I didn’t even really know about it except that John [Green ’00] had been writing books for teenagers and I liked his books. This weird sci-fi mystery thing that I had in mind didn’t seem anything like his books, or any teen books I knew about, so it didn’t occur to me that they might be YA until Barnes & Noble decided [to] shelve [them] in the young adult section. And I was like, "Oh! Well, I guess I’m a young adult author."

KC: You’ve often been compared to Green because you both went to Kenyon and are both successful writers. How do you feel about those comparisons?

RR: They’re very flattering. I like that our books are just different enough though, you know? We’re not sort of eating from the same trough, but there’s plenty of overlap. It’s really cool that we started out here — we were in a comedy group together, that’s why I know John. We started writing together for these sketch comedy things, then we became friends. That we would both end up having this sort of parallel career track...the same really weird, rare, can’t-apply-for job — it’s just so random. It’s some weird little bit of magic.

KC: What advice do you have for Kenyon writers who aspire to your level of success?

RR: I feel like my success was partly the result of not aiming specifically for what I was doing. The bullseye for being a professional writer for a living is very small, and I don’t think I could’ve hit it on purpose. I was aiming for something else. Going to Kenyon taught me to use a lot of different parts of my brain and explore a lot of different things at once. Don’t be afraid to learn something new, don’t be afraid to reach into a subject you don’t know very much about and...learn on the job. 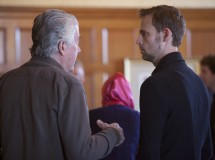 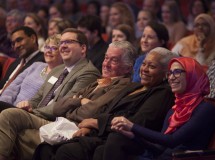 Ransom Riggs '01 poses with a fan during his book signing.