On Saturday, Oct. 13, Kenyon announced the public launch of its largest fundraising campaign ever, titled Our Path Forward: The Campaign for Kenyon. The $300 million comprehensive campaign funds the vision of the Kenyon 2020 strategic plan and prepares the College for its third century.

“With the talent, energy and support of the entire Kenyon community, we will continue to set the standard for excellence in liberal arts education, at a time when its values and principles are needed more than ever,” President Sean Decatur said. “This campaign will ensure that Kenyon reflects the diverse world our graduates will enter and will equip faculty and students to pursue game-changing questions in the classroom, in the field and in their lives beyond Kenyon.”

Three major priorities for the campaign include fundraising for endowed scholarships and professorships; support for internship and research opportunities, community-engaged learning and off-campus study; and increased capacity to adapt Kenyon’s campus for more innovative and collaborative learning and teaching. The campaign also aims to boost contributions to the Kenyon Fund, an annual giving fund that helps power Kenyon’s yearly activities and reduces reliance on tuition income.

“Kenyon made a profound difference in my own life — the education, the relationships, the push to excel and the honors scholarship that made it all possible. At reunions and on the board of trustees, I’ve seen the unparalleled loyalty that Kenyon inspires, this deep-seated belief that we have a treasure here in Gambier and we must keep it thriving for generations to come,” said campaign co-chair Rose Brintlinger Fealy ’84, who is chief financial officer and chief administrative officer at the Museum of Science and Industry in Chicago. ”This campaign will extend our pathway and build bridges to the future — a future of accomplishments, excellence and discovery in our students and our faculty. Many dreams will be turned into reality.”

A $100 million fundraising goal for endowment for financial aid is the largest single priority of the campaign. Reaching this goal would enable the College to increase the number of low-income students on campus by 10 percent and double the proportion of the financial aid budget that is supported by endowment. As part of this goal, with the leadership of former Kenyon College Board of Trustees chair Barry F. Schwartz ’70, the College launched a $20 million effort to establish the President’s Fund, aimed at giving Kenyon the financial capacity to bring more talented underrepresented students from low-income backgrounds to Kenyon.

Increasing support for faculty through endowed professorships and faculty development funds represents a $25 million goal of the campaign. Endowed professorships are vital in the recruitment of top-tier faculty members. Four faculty positions have so far been endowed through Our Path Forward, including a Distinguished Professor of Diversity and Inclusion, established in 2018 in honor of Professor of American Studies Peter Rutkoff through gifts from his former students and others.

Through Our Path Forward, the College seeks to raise $60 million toward experiential learning efforts, so the College can strengthen the bridge between what students learn and how they will use it after graduation. Additional funding will continue Kenyon’s progress in providing more undergraduate research opportunities, more stipends for students to take unpaid internships, and stronger apprenticeship programs on campus, such as the Gund Gallery Associates and the Kenyon Review Associates.

Campaign priorities also include an $80 million goal to create vibrant facilities that will foster collaboration and innovation among faculty and students. Already the College has received a $75 million donation — its single largest in history — to support the development of a new library and academic quadrangle as well as academic programs. This West Quad project will be a hub for 21st-century learning and teaching and will allow the College to make significant progress toward a more physically accessible campus. Additional projects include two new buildings for the Department of English, completed this fall, as well as construction in downtown Gambier that will create more apartment-style living for students and new retail spaces.

“For nearly two centuries, Kenyon has educated students to be leaders in their communities, giving them the capacity to tackle some of society’s most complex issues and helping them use their education to make a difference in the lives of others,” Vice President for Advancement Colleen Garland said. “This campaign will give Kenyon the ability to open access to this transformative liberal arts education to even more of the world’s best and brightest students and to supply them with the resources needed to advance their visions.”

More than 12,000 donors so far have supported the campaign, driving more than $200 million in gifts. This comprehensive campaign follows the successful “We Are Kenyon” comprehensive campaign, publicly launched in 2007, which raised more than $240 million. Our Path Forward is led by campaign co-chairs Brintlinger Fealy; David Horvitz ’74, the chairman of SouthOcean Capital Partners in Fort Lauderdale, Florida; and Jim Parker ’81, president of Parker Plastics, Inc., in Pleasant Prairie, Wisconsin. Honorary chairs are Buffy Ireland Hallinan ’76 of Gambier and Richard L. Thomas ’53, the retired chairman of First Chicago NBD Corp. in Chicago. 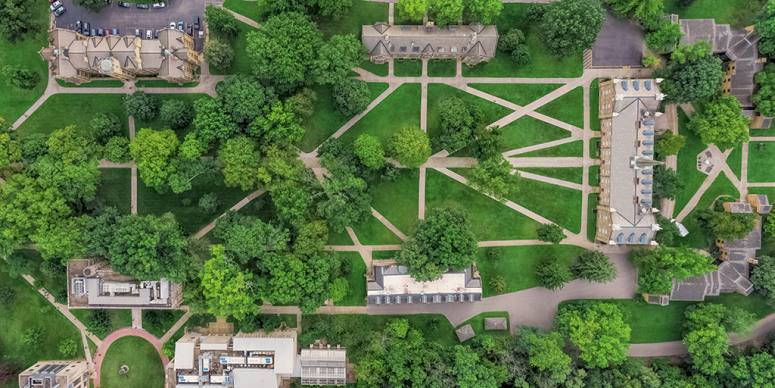 The Our Path Forward campaign has been gathering momentum on the Hill, and the celebration will advance across the country in 2019. This $300 million comprehensive campaign — Kenyon’s most ambitious ever — is a partnership with the entire Kenyon community and those who value a transformational education.

Learn more about the campaign.
Join our path forward.
Give To Kenyon
Loading