The winter main-stage production is theater favorite Our Town, the sentimental fable that cautions viewers to take stock of their lives.

Famously moving, and spanning the lives and deaths of residents of a small American town, Our Town invites the audience to participate in a meditation on the human condition through theater.

The narrator talks directly to the people in the room, orienting their attention and reminding them that they’re not in Grover’s Corners, New Hampshire, in the early 1900s, but actually in the town and theater and time where the performance is taking place.

As the play ends, the narrator eases the audience back to the reality that the play cautions against: where life moves so quickly that people never witness its full glory, said director James Dennen, assistant professor of drama. In Kenyon's production, the actors actively resist this bleak life sentence, as authored by Wilder, he said.

"The players go rogue in the tiny spaces before and after the playwright's lines, in order to prove him wrong," Dennen said. "But ultimately, in spite of themselves, they wind up bringing home to our own Bolton Theater spectators — we hope — the very questions that Wilder places so potently at the heart of the play: How can we live life while we have it? And, can the theater itself help us rise to meet this challenge?"

Stage manager Amy Young ’16, a drama and art history double major from Shaker Heights, Ohio, said she has met with Dennen for “hours upon hours” outside of rehearsal talking about how to approach specific lines. “It challenges you to get to a certain level of specificity, and Jim is there with you every step of the way,” she said.

Assistant director Abby Armato ’17, a drama and English double major from Downers Grove, Illinois, said Dennen trusts the student directors’ opinions. “It’s cool because I get to sit here and watch this thing come to life and say, ‘That was my idea,’ and, ‘That was my blocking.’ It’s very validating,” she said.

Stage manger Natalie Kane ’18, a drama and history major from Mountain Lakes, New Jersey, said that along with some added reflection, the production will include the traditional moments that viewers would want in a staging of Our Town, such as a signature scene when two main characters talk to each other on top of ladders.

“It’s a very iconic piece of American theater,” she said. “It definitely holds up and still has something to say.”

The Bolton Theater box office is open 1 to 5 p.m. Monday through Saturday during the week of the show, plus the hour before the play. Student tickets are $2.

­– Timmy Broderick ’16 contributed to this article. 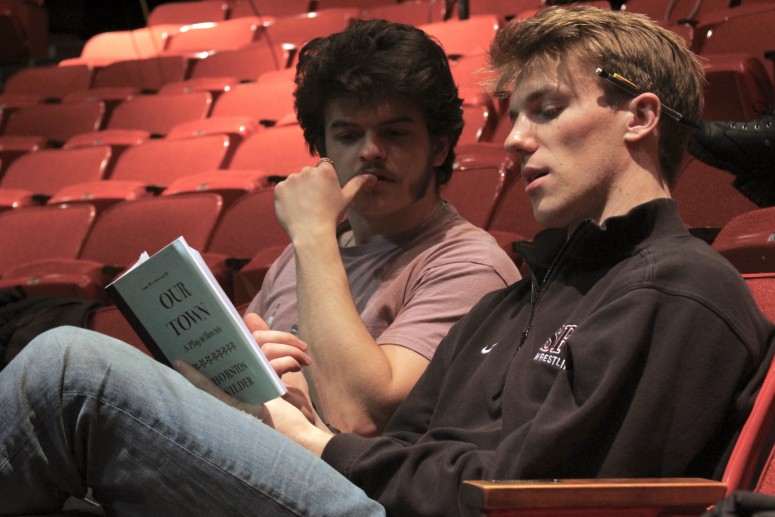