From warm Texas summer nights to gruesome war crimes, Tarfia Faizullah’s poetry has connected with and drawn readers into unexpected situations of both intimacy and struggle. The award-winning poet brings her talent to Kenyon Tuesday, March 17, at 4:10 p.m. in the Cheever Room of Finn House.

Faizullah has been on campus before as an instructor in the 2014 Kenyon Review Young Writers workshop. Sarah Bence ’15, an English major from Okemos, Michigan, who was a resident assistant during the summer workshop, recalls Faizullah as “a magnetic presence. She takes a very amorphous art form that is often criticized as being useless, fluffy, pointless or a hobby and transforms it into a method for social change.”

Seam, Faizullah’s debut collection of poems, won the 2015 Great Lakes College Association New Writers Award. The work recounts the harrowing experience of female victims of rape and torture by the Pakistani army during the 1971 Liberation War. “With patience and immaculate lyric precision, and with sublime attention to language and the courage to interrogate her privilege and curiosity, Faizullah twines a seam where the wounds are remembered. … This is a powerful debut,” wrote Jean Valentine, a National Book Award winner and author of Break the Glass.

Aimee Nezhukumatathil, recipient of a National Endowment for the Arts grant and author of Lucky Fish, notes the inherent topicality and relevance of Faizullah’s poetry. “This is a poetry of news — where brutality, desire and beauty combine to form a rich testament of what poetry can do,” she said.

Bence said she is excited to see Faizullah back on campus. “Her passion for social change has influenced my own writing, and, I sense, an oncoming wave of poetry that draws back the curtain of injustice and makes poetry into both an art form and a chance to help others.” 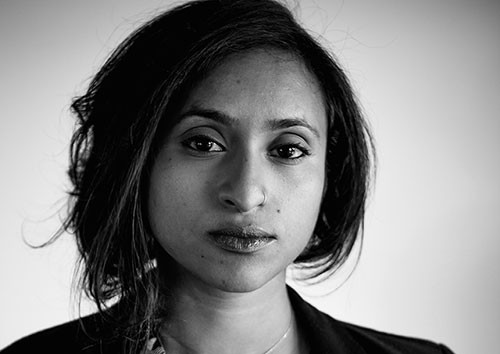