An open house Jan. 23 heralded the beginning of the new Black Box Theater, located between Gaskin Avenue and the Craft Center on the northern end of campus.

The new $300,000 building is larger and more accessible than the theater’s previous location, the former 1905 bank building on Chase Avenue that was removed last summer to make way for a building with new student apartments and the Village Market.

“This is really exciting because it feels like a space for creations. It’s a very theatrical space,” said Julia Weinberg ’17, a drama major from Richmond, Virginia. “It’s different from the old Black Box because of the amount of performance space and the technical booth space.”

Students and staff members who came to the open house could see the light grid 14 feet above the theater floor. There is no raised stage, but at the open house, risers framed three sides of the performance space to show how moveable seating could accommodate about 75 people. A large black curtain hung across the southern end of the space to hide a garage door that will allow for easy transfer of equipment or scenery to the building.

The new Black Box also has a storage room and a green room for actors to await their time to perform. It also has bathrooms, which the old bank building did not; guests attending events there had to use public restrooms across the street in Farr Hall. The theater will be managed this semester by Ethan Fuirst ’17, a film major from Chappaqua, New York.

The building is operated by the Division of Student Affairs. The first performance in the new Black Box will be held Jan. 28 by the Ballpit Whalers, an improve comedy group that performs 20-45 minute plays based on suggestions from the audience.

Each semester, the Black Box Theater usually hosts three or four student productions and serves as a lab for drama classes such as “The Lighting Designer” and “The Actor.” Last fall, students used Weaver Cottage for rehearsal and performance space as they waited for completion of the new Black Box.

After the Peoples Bank of Gambier vacated its building on Chase Avenue in 1998, the College bought it to use as office space. It later became the home for experimental theater by students, but accessibility to the building was a problem, and the performance and audience space was limited to only 750 square feet.

Construction on the new, more accessible Black Box Theater began in late August 2016. The new theater building is 2,000 square feet, with 900 square feet of performance space. The exterior of the theater mimics the gray exterior of the neighboring Craft Center, also known as the “art barn.”

Meanwhile, construction continues on the 5,850-square-foot Village Market building at the corner of Chase and Brooklyn streets. The concrete foundation now supports the framing structure of the building, which will house the market on the first floor and apartments for 12 students on the upper floors. It is projected to be completed by the summer of 2017.

Construction also continues on two new buildings behind Farr Hall. These buildings will each house eight students in apartment-style living similar to the North Campus Apartments. There will be a courtyard between the buildings and Farr Hall. Work on that site began in December 2016 and is expected to be completed in the fall of 2017.

Construction Sights: Work on the site of the old bank building on Chase Avenue is set to begin, continuing a slate of improvements to downtown Gambier. 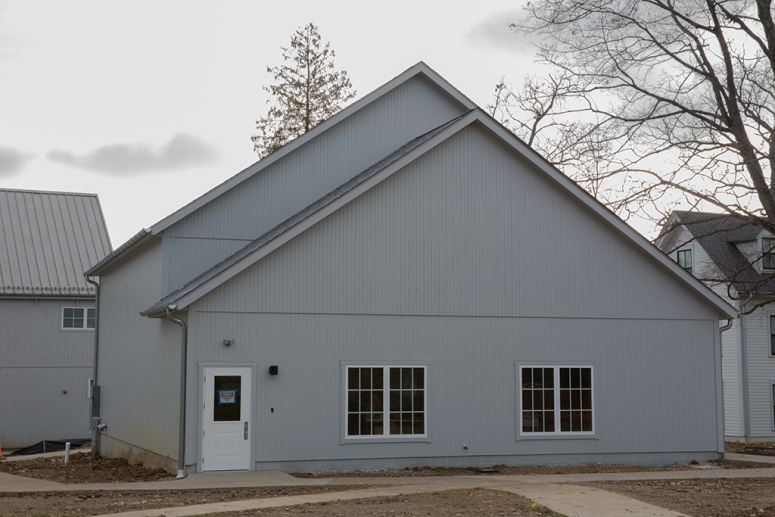