The Brown Family Environmental Center, Kenyon’s expansive nature preserve just down the Hill, is celebrating 20 years of providing students a living laboratory and a place to have fun, relax or get some exercise outside.

Students measure trees in biology class, test the Kokosing River for research projects, have tried spear throwing like Neanderthals and create dances inspired by the landscape.

The 480-acre preserve is one of the College’s strongest links to nearby communities, welcoming 16,000 children for field trips since opening in 1995. In the last decade, the BFEC doubled the number of people reached through programs including nature hikes, garden talks and trail runs.

Following a liberal arts commitment to learning in the context of one’s surroundings, students are challenged to care about the BFEC land, plants and animals.

“Part of the idea is if you have an awareness of this space and are personally connected to it, you care about what happens to it, and that allows you to imagine and care further,” said BFEC Programming Director Heather Doherty ’98. “Suddenly, an injury to this space and what lives here is a personal injury. Then you take it further to your state or your world.”

An anniversary celebration in September included a hike with wading in the river, live music and free frozen custard. Kenyon dance students performed in the gardens and prairie. Two activities were planned just for students: tubing in the river and climbing a giant sycamore tree with harnesses.

The land was a farm purchased in the late ’80s, the first of many plots the College has helped preserve in the years since. A cornfield was converted to a prairie and a goat paddock changed to a wildlife garden with ponds and plants to attract butterflies. Railroad tracks through the property became the Kokosing Gap Trail, as staff and volunteers cleared 8 miles of trails over the years and planted 10,000 trees.

Erin Keleske ’18, a BFEC student manager who lives in the house and wants to go into conservation work, said the center was a major factor in her decision to come to Kenyon. Acres free from distraction help her destress, she said.

“I don't think I fully comprehended what a wonderful resource I had at my disposal until I tried to explain it to friends back home,” said Keleske, of Racine, Wisconsin.

When Doherty was a student in the ’90s, she helped plant saplings along the river and visited the pine plantation of 1,000 trees that were 4 feet tall. Now those trees form a pine fortress forest, she said. “It smells exactly the same to me now as it did 20 years ago.”

The idea for the nature center started with former President Philip Jordan and his wife, Sheila, who came to Kenyon in 1975 informed about land preservation from their time at Connecticut College.

Kenyon found the money to buy the farm that became the BFEC during lean budget years after the landowner considered adding a mobile home park across from Kenyon’s entrance. “The whole natural ambience of Gambier is preserved by the environmental center,” Phil Jordan said.

After the initial purchase, finding donors to expand and improve the property became easier, he said. “Kenyon’s setting is essential to the character of the College and the learning that goes on there. I’m absolutely convinced of that.”

The Jordans, both given honorary Kenyon degrees, shared their vision with Ray Heithaus ’68 when he and his wife, Pat, joined the biology faculty in 1980.

Ray, a professor emeritus of environmental science and biology, said he scouted land with interesting natural features farther from campus, and the College was lucky to get space next door. “There aren’t too many facilities like this that are walking distance from campus,” he said.

He helped plan the land lab from scratch, and Pat, a retired biology instructor, had a large role in developing lab exercises for what was then called the Kenyon Center for Environmental Study.

The name was changed in 1999 with an endowing gift honoring former Kenyon Dean and 1911 graduate Robert Bowen Brown and his family, which includes several other Kenyon graduates.

The Resource Center opened a couple years later, adding a laboratory classroom space and allowing larger groups than the house. Now, the building is reaching its capacity limits.

Doherty and the Jordans have the same favorite spot on the property: the hill behind the prairie where visitors can see the spire of Old Kenyon. The Jordans went there for a cold sunrise on New Year’s Day in 2000 to contemplate the new century. “It’s a place that can change them (students),” Sheila Jordan said.

Doherty likes to lead moonrise hikes to the hill to watch the sunset and the moon appear alongside the spire. Students see a different view of campus lit up at night from afar and start to realize where Kenyon fits into the landscape, she said. “It is really magical.” 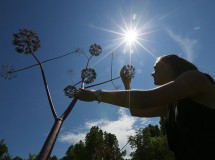 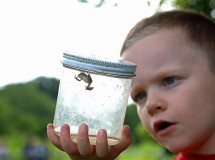 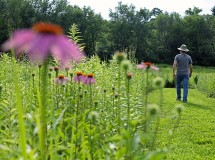 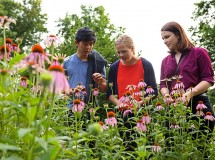