From the time she arrived on the Hill, Erin Keleske ’18 has been seeing green. Keleske, from Racine, Wisconsin, originally intended to be an English major at Kenyon, but that plan quickly changed once she got intimately involved in environmental sustainability and recycling efforts across campus. Now a biology and environmental studies double major, Keleske recently was recognized for her dedication to the Kenyon community with a Charles J. Ping Student Service Award.

Keleske became the first Kenyon student to win the award, which is given by the Ohio Campus Compact, a nonprofit coalition of college and university presidents working to promote the civic purposes of higher education. The award is granted to undergraduate students for their outstanding leadership and commitment to community service. A Kenyon committee proposed Keleske as a potential nominee for the award, and President Sean Decatur approved the nomination and wrote her letter of recommendation.

“It feels good to be nominated,” Keleske said. “It’s easy to get stuck in the day-to-day rut when you’re doing these campus service things, and it kind of becomes second nature that it’s what you do on campus.”

Dave Heithaus ’99, director of green initiatives, has worked with Keleske since her sophomore year, when she served as a student manager of the Brown Family Environmental Center (BFEC). This year, in addition to leading field trips at the BFEC, Keleske worked with Heithaus as an intern in the Office of Green Initiatives.

“Erin’s really all-in,” Heithaus said. “She’s very high energy, she doesn’t shy away from any challenge, but she’s also really thoughtful. She doesn't go off in wild directions. She thinks things through, and she anticipates problems.”

The Office of Green Initiatives is responsible for spearheading Kenyon’s efforts to become a more environmentally sustainable college. Keleske is a crucial leader in its recycling and renewable energy work, and she also serves as president of the Environmental Campus Organization (ECO), a student-run group that focuses on environmental initiatives. Her work extends into fostering stronger relationships with Knox County residents, too, through her efforts with local food-sourcing and rummage sales to promote clothes recycling.

Director of Community Partnerships Jen Odenweller described Keleske as an effective, inspirational voice adept at connecting with local community members. “Erin leads by example,” Odenweller said. “Her character, her energy, her personality bring people together. When I look at all the groups and initiatives she’s involved in, I look at the positivity she brings and the intentional line of thinking, of asking the extra questions and of being respectful in how we engage with others.”

Keleske, who is also the recipient of a Charitable Service Scholarship from the Association of Episcopal Colleges, will stay in Gambier this summer to conduct research as a Summer Science Scholar. She will work with Associate Professor of Biology Drew Kerkhoff to study paleoclimatology and how plant biodiversity is affected by climate change velocity over millions of years. 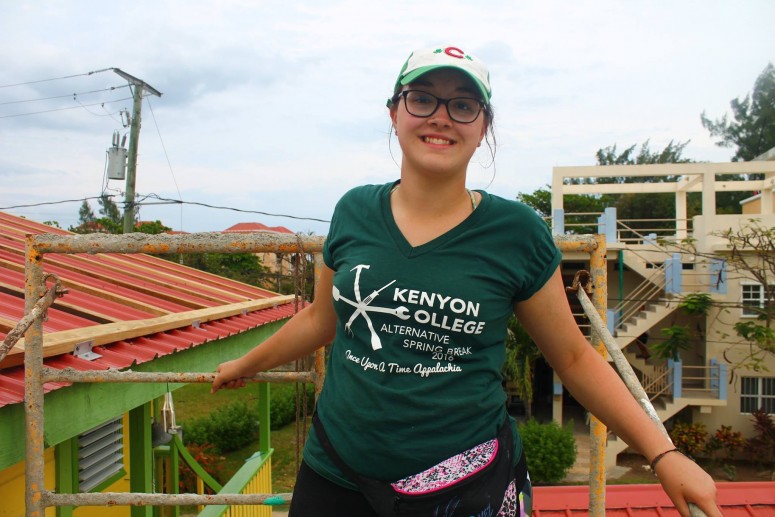