Kenyon dancers performing nine pieces in the spring dance concert will depict a homeless woman on the fringes of society and explore themes including memories, comfort zones and trust in relationships.

The dance department’s three 8 p.m. performances at Bolton Theater will take place Thursday, April 30; Friday, May 1; and Saturday, May 2.

The concert will include a series of powerful, personal vignettes by 15 senior dancers created during an eight-day intensive guest residency at the Department of Dance, Drama and Film by performance artist Tim Miller, known for solo performances across the world.

Miller has written books about his life as a gay performer, taught at various universities and co-founded performance spaces in Manhattan and Santa Monica, California. The dancers performing his Cut from the Same Cloth will examine hiding places, dreams, memories and desires, Professor of Dance Balinda Craig-Quijada said.

In a duet choreographed by Professor of Dance Julie Brodie, the pair explores the idea of trust and give-and-take in a relationship. Pinky Promise, a playful piece full of physical contact, is performed by Elizabeth Furman ’15, a dance major from Brooklyn, New York, and Amelia Dunnell ’17, a Spanish major from Montclair, New Jersey. Furman also choreographed a dance in the show titled Replica Till I See You, working with six dancers and six prom dresses.

Gabby Mitchell ’15, who majors in anthropology and dance, will present her senior capstone in which she studied the notations for Depression-era piece Tenant of the Street and taught the dance to Brodie to perform at the concert. The solo piece depicts a homeless woman whom many people would ignore. “But the work makes you look,” said Mitchell, of Liberty Township, Ohio. “The movement is stark and dramatic with a full use of space, set to street noises of New York City.”

A piece called Secret Planet choreographed by Lauren Glover ’16, a dance major from Boulder, Colorado, is a short and energetic showcase of the differing styles of six dancers framed by animalistic movements, she said.

In collaboration with eight dancers, Gina Jacobs Thomas, visiting assistant professor of dance, choreographed a piece that delves into the experience of outgrowing something or someone familiar but being afraid to move on. “Groups of dancers assemble and dissolve through the space, exploring what happens when someone moves beyond the comfort zone,” she said.

Another dance was inspired by a three-month visit by Emily Graf ’15 to the Patagonia backcountry in South America and the culture shock she had upon returning to the U.S. Graf, an English major from Chicago, created Lung Study in which five dancers interpret the differences between intellectual and physical types of work.

Tickets for Kenyon students cost $2, and general admission seats go for $7.50. The box office at the theater is open from 1 to 5 p.m. Monday through Saturday and an hour before the shows. Contact the box office at 740-427-5546. 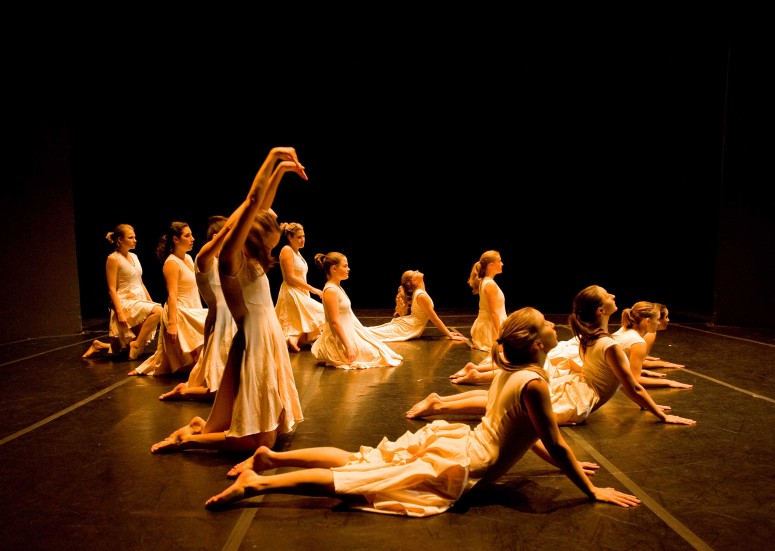