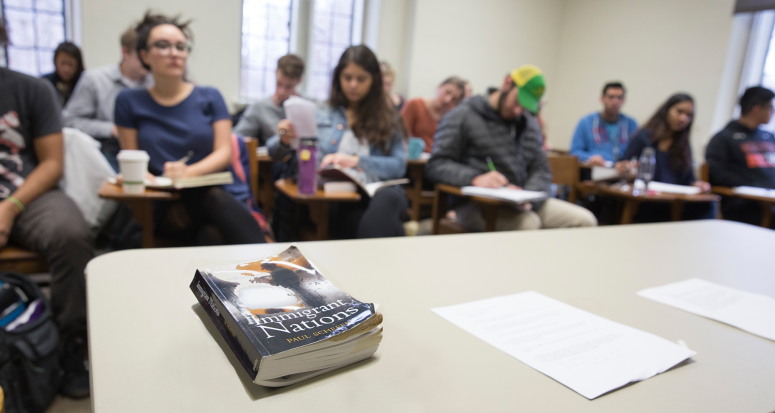 Some immigrants seeking asylum in Ohio have powerful voices working on their behalf: Kenyon students.

A class of 21 students teamed with the nonprofit Immigrant Worker Project last semester to research cases for nearly a dozen immigrants seeking protection in the U.S. from difficult conditions in their home countries. The upper-level political science class, “Immigration, Citizenship and National Identity,” aims to help students learn about the complexities of the immigration system and the people involved in it, said Assistant Professor of Political Science Nancy Powers ’83, who has taught the course for four years.

Powers partnered with Jeff Stewart, director of the Canton, Ohio-based nonprofit, to formulate a course based on the real-life cases of individuals in Ohio going through immigration court proceedings and facing deportation. Stewart gave students cases to research, asking them to find articles, data and reports from credible sources about the immigrants’ home countries —and ideally hometowns —to help substantiate the specific conditions and threats in the migrants’ cases for asylum.

“As they do that fine-grained research, they really come to understand why people migrate,” Powers said. “None of the cases are simple. They involve people’s lives, which are complicated.”

Claire Oxford ’18, a Spanish and English double major from Paxton, Massachusetts, was assigned the case of a young woman fleeing sexual violence in her native Honduras. In conducting research for the young woman’s asylum petition, Oxford learned about different regions in Honduras and studied trends in sexual violence and poverty that other Honduran women seeking asylum in the U.S. faced.

“You wanted to get into the work because it wasn’t just a paper,” Oxford said. “It applied to something that was actually happening in somebody’s life. It carried much more weight and was much more engrossing” than a traditional research project.

The documents that students gathered and annotated in support of the immigrants’ cases were presented to the judges ruling on the asylum requests. In a case last year that was “on the razor’s edge,” Powers said, the thorough work by the students helped “swing the weight,” leading the judge to decide against deportation.

“Our research made the difference,” Powers said. “It doesn’t happen every time, but it can happen, and that’s part of what makes it so motivating.”

As part of the course, Powers requires students to delve into the State Department’s website as if they were applying for visas themselves. The exercise highlights how difficult it can be, especially for non-native English speakers, to navigate the U.S. immigration system.

“It was amazing that we, as college students fluent in English, could hardly figure it out,” said Catherine Von Holt ’19 of St. Louis. “It made it real.”

Oxford added, “It was eye-opening in terms of the minutiae and all the obstacles that face people immigrating into the U.S.”

The elective class counts as credit toward a political science major, an international studies major or a Latino/a studies concentration. Powers says she recognizes that students may feel uncomfortable defending people who are not in the country lawfully, and she gives her students the option to pursue a different assignment. So far, no one has objected to the project. Additionally, students learn about the policies, politics and ethics of immigration in regions around the world and discuss what it means to be a citizen of a nation.

The class demonstrates Kenyon’s mission to bolster community-engaged learning, applying academic knowledge to real-world problems to promote civic responsibility. Though the course examines migrant issues from far-away regions such as Central America and Europe, the effects of immigration challenges can be readily found in communities surrounding Gambier — a fact that hit home for some students.

“This class made me feel like I have the power and opportunity to be helpful,” Von Holt said. 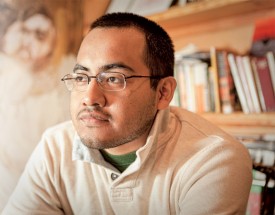 Marco Saavedra ’11, who came without documentation to the U.S. as a child, has been thrust into the international spotlight through his passion for immigration reform.

More about Marco Saavedra '11.
Join our path forward.
Give To Kenyon
Loading