Student musicians and vocalists will showcase their talent in the Angela Waite Student Recital in Brandi Recital Hall on Saturday, Jan. 17, at 7 p.m. Each of the 10 musicians — with majors from English to math — has been selected by the faculty in their music juries based on their impressive performance.

Sam Teeter ’15, an English major from Topeka, Kan., is one of two seniors who will perform. Teeter, who has been playing the violin since the age of five, will tackle the Giga movement from Bach’s second partita for violin.  “I first became interested in [the violin] when I saw a photo in our local paper of a boy my age playing [it],” Teeter said. “I loved classical music when I was little, and I pestered my mother for two weeks until she got me lessons.”

Teeter has been studying with Ariane Sletner, adjunct instructor of violin. “She is an excellent teacher,” he said.

The Angela Waite Recital is named after the wife of Kenyon trustee Charles P. Waite Jr. ‘77, who made a donation in her name as an anniversary gift in 2000. 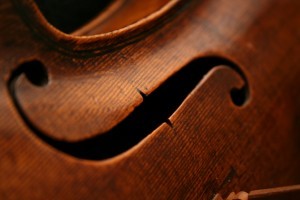