In her first field hockey match at Kenyon, Rachel Hall ’15, a neuroscience major from Los Angeles, took the field as a starter. Hall did not register a single stat, and her team endured a 6-1 drubbing from Centre College. She finished the season with six goals and a pair of assists.

Fast forward to this season. Hall is now one of the most prolific offensive players in the history of Kenyon field hockey. On Oct. 18, Hall scored the Ladies’ final goal in a 5-2 victory at Wittenberg University, bumping her tally up to 42 goals and 101 points over her Kenyon career. Both those totals are Kenyon records, eclipsing marks previously owned by Carrie Moore ’99.

““I am very humbled to be a part of Kenyon's field hockey history,” Hall said. “Being a part of this program has been one of the best parts of my experience here.”

Hall not only has come a long way as an individual athlete — she has helped steer the team along the same path of improvement. The Ladies concluded her first-year season in 20113 with a 7-11 record. This season, the team owns a 14-2 mark, sits in first place in the conference standings and is vying for the program’s first North Coast Athletic Conference (NCAC) championship since the 2007 team grabbed a share of the title.

“Rachel has worked hard to improve the past couple of years. She has really focused on getting the most out of her position,” Head Field Hockey Coach Jacque DeMarco said. “She is very competitive and focused on doing whatever she can do to make her team successful. Her ball control and eliminations have really made her a force in the NCAC. I could not be prouder of her.”

Hall, a 2013 All-NCAC and All-Region first-team honoree, leads the Ladies this season with 27 points on 11 goals and five assists. 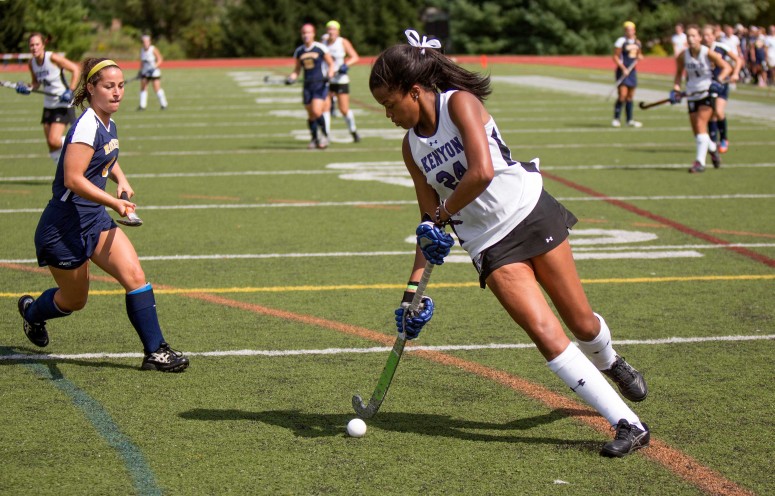