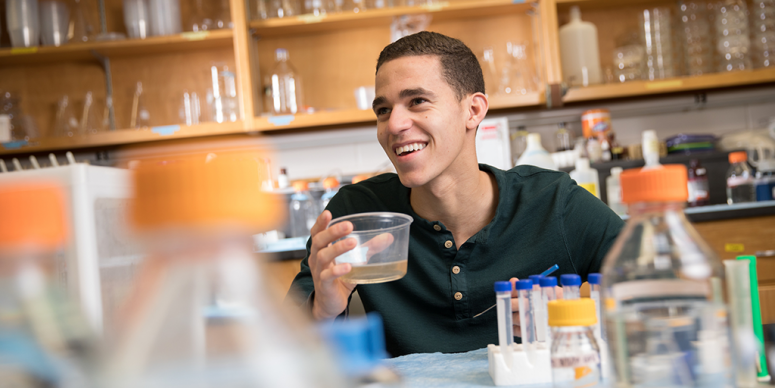 As a member of Professor of Biology Chris Gillen’s research team, David Anderson ’19 examines the life cycle of mosquitoes, among the most adaptable animals in the world but also one of the most dangerous.

“Our lab focuses on the eradication of mosquitoes,” said Anderson, a biology major on the pre-med track at Kenyon. “They are responsible for more than one million deaths per year because they transmit diseases such as yellow fever, the Zika virus and malaria.”

Anderson’s research earned him acceptance into the Exceptional Research Opportunities Program, which will send him to Harvard University this summer. “My list of preferred labs all had to do with research on preventing disease,” said Anderson, who will be paired with a mentor investigator at Harvard and receive a $5,000 stipend.

Anderson, a self-described “intuitive and curious person,” expressed an interest in science at an early age, opting to watch “Nature” instead of cartoons. Before his first year at Kenyon, he participated in the Kenyon Educational Enrichment Program (KEEP), which introduced him to his advisor, Gillen.

“David combines the intellect and curiosity to ask the right questions, and practical lab skills to make the proper judgments,” Gillen said. “You need both to be a good researcher, and he has them.”

Meanwhile, Anderson, from Urbana, Illinois, has embraced the opportunity to understand science at a deeper level at Kenyon. “It’s really easy to follow a process step by step, but it’s more challenging to understand the science behind each step,” said Anderson, who added that this award has inspired him to steer his focus toward medical research.

The Exceptional Research Opportunities Program is funded by the Howard Hughes Medical Institute, which also awarded Kenyon a $1 million grant to help recruit and advance underrepresented students in the natural sciences. Twenty-four schools nationwide were selected to participate in the Inclusive Excellence initiative, which focuses on helping schools break down institutional barriers to inclusion of students underrepresented in science education. 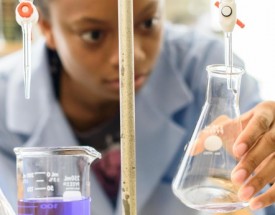 Kenyon will receive a $1 million grant to engage underrepresented students in the natural sciences.

Read more about the grant.
Join our path forward.
Give To Kenyon
Loading