Professor of Political Science David Rowe is an expert on economic sanctions and the causes of World War I. At Kenyon, he teaches courses in international relations, comparative politics and political economy, has developed a nationally recognized course on terrorism and is the former director of the international studies program. We asked Rowe five questions about his view of the recent meeting in Singapore between President Donald Trump and North Korean leader Kim Jong Un.

The joint statement signed by Trump and Kim identifies four goals: to establish relations between the United States and North Korea, to achieve peace on the Korean peninsula, to work toward denuclearization of the Korean peninsula, and to recover and repatriate remains from Korean War dead. What do you make of these four goals?

The goals are both reasonable and laudable. Northeast Asia is one of the most dangerous regions of the globe. Creating a strong, stable, and secure peace on the Korean peninsula would make the world a safer and more prosperous place. Unfortunately, the summit’s goals are too vaguely stated, nor does the joint statement develop a sufficient framework to achieve them.

For example, the U.S. and North Korea do not define denuclearization in the same way. Despite how the agreement is being touted by the White House, it is important to note that North Korea did not commit to dismantle its nuclear arsenal and weapons capability in the joint statement — something that should have been relatively straightforward to promise.

What North Korea actually committed to was “to work toward complete denuclearization of the Korean Peninsula.” This is something else entirely. Although the U.S. withdrew its nuclear weapons from South Korea in the early 1990s, the presence of U.S. forces there (as part of the U.S. promise to keep South Korea safe) means that these weapons could be rapidly reintroduced to the peninsula in a crisis. For North Korea, the complete denuclearization of the Korean peninsula means the removal of all U.S. forces from South Korea, a step that would undermine the U.S.-South Korean defense alliance.

Note too how North Korea’s commitment under this agreement is entirely consistent with efforts by North Korea to build out its nuclear arsenal even further. If the growing nuclear threat from North Korea leads the U.S. to abandon South Korea and pull its troops out, North Korea will have achieved a major step in its efforts to denuclearize the Korean peninsula — by ensuring the permanent removal of American forces. In short, nothing in how the goals are stated or framed actually commits North Korea to dismantle its own nuclear arsenal or even change its behavior.

At the summit, Trump pledged to suspend joint military exercises with South Korea. Did North Korea make an equivalent concession, and how will this affect our security relationship with South Korea?

South Korea (and Japan) should be very worried. Joint military exercises with allies have two important purposes. Most apparent, they allow us to practice and train with our allies to use military force to defend ourselves should war break out. Well-trained militaries are always better than poorly trained ones and comprise a stronger deterrent to potential rivals and adversaries. Most important, but less apparent, joint exercises signal that we share fundamental interests and values with our allies, interests and values important enough to fight and die defending.

By unilaterally ending these exercises without consulting or warning South Korea, President Trump has signaled that he considers South Korea (and given its geographic proximity, Japan) to be outside the sphere of vital U.S. interests. He even reiterated the point in his press conference when he complained that the joint exercises were “tremendously expensive,” and that he wants to “get our soldiers out” of South Korea and “bring them back home.”

North Korea made no significant concessions. The earlier destruction of the North Korean nuclear testing site and its promise to dismantle a missile testing facility are empty gestures. The site (built inside a mountain) suffered a major collapse and was rendered unusable after North Korea’s last nuclear test. North Korea has also pretty much perfected its missile engines so it’s not clear that more testing is needed. What North Korea did not do, either in the joint statement, or in statements surrounding the summit, was commit to any action that would be costly to it, its interests, or the continued development of its nuclear arsenal.

Most people would probably agree that any sort of summit is better than war, which seemed like a real possibility just a few months ago. But in the longer term, what does this summit mean for both U.S. and North Korea foreign policy?

I disagree with the premise that any sort of summit is better than war. Bad summits can make wars more, not less, likely. The series of European summits over the Sudeten crisis in 1938 may have prevented a war between Nazi Germany and Czechoslovakia (at Czechoslovakia’s expense), but they also signaled to Hitler that Britain and France were weak and unwilling to defend the post-World War I order, green-lighted German aggression, and thus paved the way for the exponentially more destructive World War II.

Remember, too, that the fears about the possibility of war just a few months ago arose from a crisis of Trump’s own making. They arose from the Twitter war between Kim and Trump about who had the bigger button. For more than three decades, successive U.S. administrations have seriously contemplated war to disarm North Korea’s nuclear capabilities and concluded each time that it was simply too costly given South Korea’s vulnerability to even a conventional North Korean attack (Seoul is only 35 miles from the Demilitarized Zone and within range of North Korean artillery).

Historically, the U.S. instead opted for a strategy of military deterrence to dissuade North Korea from attacking South Korea, Japan or the U.S. To paraphrase Teddy Roosevelt, American policy was to speak softly but carry a big stick. Absent a change of regime in North Korea, military deterrence is the only strategy that can simultaneously manage the threat that North Korea poses to the U.S. and fulfill the American obligation to protect South Korea. The essence of President Trump’s strategy to defuse the Korean conflict is to try to buy good behavior from North Korea by offering to abandon our obligation to protect to South Korea, a strategy otherwise known as appeasement.

North Korea has made no concessions but gained major benefits from the summit. It has reduced the threat from the U.S., as the U.S. has ended joint exercises with South Korea, sown substantial doubts about the willingness of the U.S. to make good on its promises to protect South Korea and Japan, strengthened Kim’s domestic standing by elevating North Korea’s status as a political equal of the U.S., and gained breathing space that will likely see the de facto relaxation of sanctions over time. In short, Kim’s strategy of nuclear belligerence has yielded enormous dividends at very low cost.

Over the longer term, I think the summit makes northeast Asia less secure. Growing doubts about the U.S. commitment to maintaining its security alliances with South Korea and Japan are likely to invite more opportunistic behavior not only from North Korea, but also China and even Russia. In this context, it is important to remember that one factor that contributed to the Korean War was a speech by U.S. Secretary of State Dean Acheson that neglected to include South Korea within the sphere of American interests in Asia.

Some have criticized Trump for praising Kim Jong Un and implicitly elevating the international status of North Korea. Others have pointed out that the U.S. has regularly cozied up to brutal dictators when it was politically convenient. Is Trump’s attitude toward Kim truly out of the ordinary, or par for the course?

Trump’s attitude toward Kim, and the elevation of the status of North Korea, is par for Trump, but out of the mainstream for post-World War II U.S. foreign policy. As a global power, the U.S. has tolerated repressive regimes as allies for the sake of global stability. But the U.S. has always been uneasy about our relations with these regimes. We encouraged the spread of democratic governments and the promotion of human rights within them, because we saw a world built around the liberal values of human rights secured through democratic politics as the best guarantor of peace and stability. In fact, South Korea, now a liberal democracy, was once an authoritarian dictatorship. The global spread of democracy within an American-led liberal world order has been a remarkable achievement of American foreign policy.

Trump sees the world differently, in terms of might makes right. He has displayed no interest in promoting human rights, the rule of law or democratic forms of government. One of the most striking things is the degree to which he disparages the United States’ longstanding democratic allies while praising dictators such as Russia’s Putin, China’s Xi, Turkey’s Erdogan and now North Korea’s Kim for their strength in ruling their peoples.

Taken together, the outcomes of the past week’s G-7 meeting and the North Korea summit suggest that we are witnessing the end of the post-World War II, American-led, liberal world order. Such major shifts in the structure of the international system rarely result in a world that is more peaceful or secure.

You’re an expert on economic sanctions. What role did sanctions play in getting both countries to this point and what role will they play in the future?

Economic sanctions have created severe economic stress in North Korea, but they are more of an inconvenience than an existential threat to the regime. Clearly North Korea would be better off if sanctions were lifted, but I cannot imagine North Korea surrendering its nuclear weapons because of them. I think sanctions will play even less of a role in the future. It is costly for third countries such as China to enforce them, and I think their willingness to do so will fade over time. 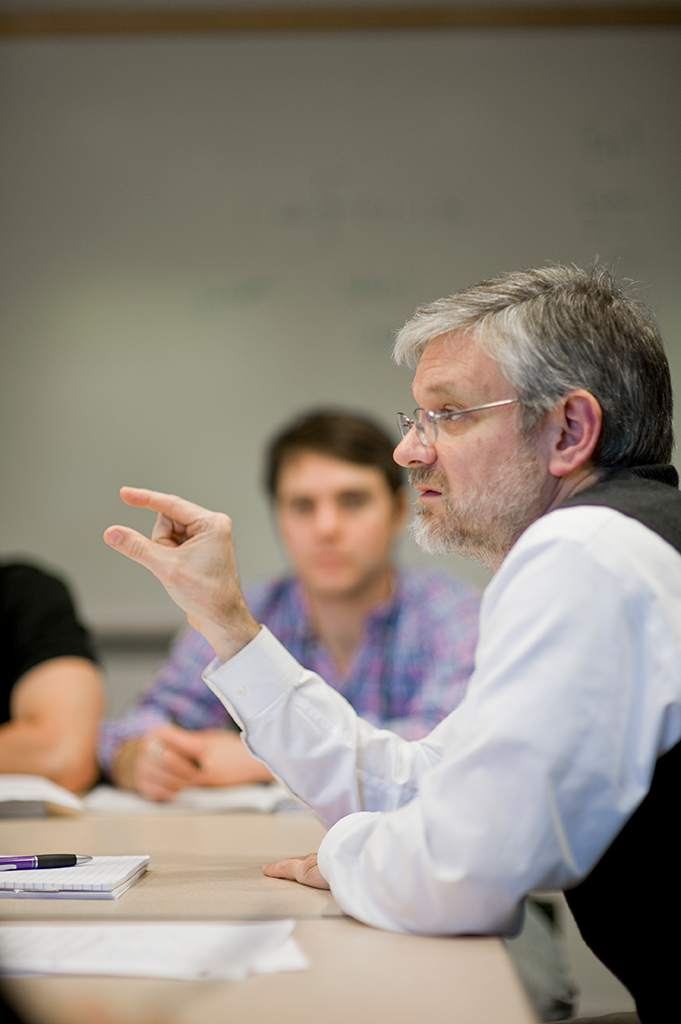