Machines are taking over, and they’re starting with our orchestras. In Brandi Recital Hall on Sunday, Dec. 4, the students in “Advanced Computer Music” performed as the Kenyon Laptop Orchestra, or KLORC, in their concert, “KLORC 3: The Machines Rise Again!”

KLORC’s performance represented the culmination of the semester’s work. In the course, students learned to use a music software program called Max. It includes functions for simple tasks like audio recording as well as for complex ideas, like creating interference between two sine wave generators.

Matt Reed ’18 of Philadelphia took the class to better understand music recording and reproduction on a deeper level. “It turned out to be more like a math or science course because it’s a lot of programming, which is awesome,” Reed said. Reed had other musical experience as a guitar player, and this past summer he had experimented with another music production software, Logic Pro.

The concert consisted of an individual performance from each of the class’s five members and concluded with a group piece that Feller joined. The group included Weston Carpenter ’19, Sam Garrett ’19, Austin Hulse ’19, Gordon Loveland IV ’19 and Reed.

The students used instruments such as the guitar and the theremin with their pieces, or “patches.” Some students would record several chord progressions on guitar, loop the progression, and then add randomly generated and filtered sound files, or they would play the theremin, which uses two metal antennae that sense the relative position of the musician’s hands to produce a pitch and volume depending on proximity.

Often Feller asks his students, “Does the piece sound as if it required the technology that was used to realize it?” Technology certainly adds another layer of sound that would not exist otherwise. “If not, there might be a problem.” 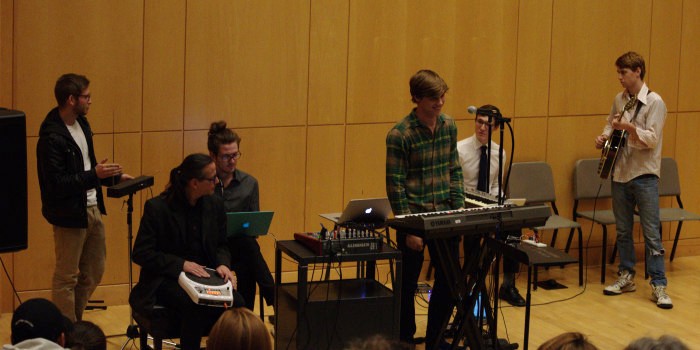